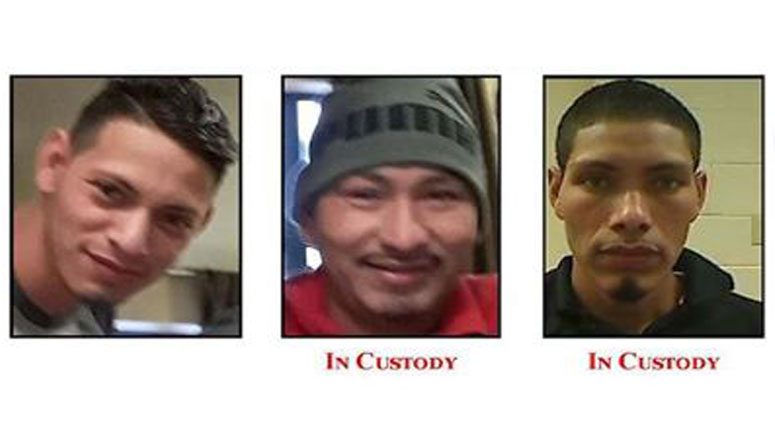 KENNER, La. (AP) — Three brothers have been accused of raping a 10-year-old girl after forcing their way into a bathroom where she was hiding, Louisiana authorities said. One of them remains a fugitive.

Brothers Raul and Wilmer Paz Perez, both 35, were arrested Saturday and charged with first-degree rape of a victim under the age of 13, news outlets reported.

Authorities are searching for the third brother, Elder Paz Perez, 31, on the same charges and additional rape charges regarding a second victim, Kenner police Lt. Michael Cunningham said on Monday.

Cunningham said the siblings were friends of the victim’s family.

The brothers were alone with the girl on Sept. 9 and began making sexual advances towards her, even offering her money, Cunningham said.

The girl refused and locked herself in the bathroom but they broke in and raped her, Cunningham said.

One of the girl’s relatives called police Saturday after finding out about the rape.

Police said anyone with information on Elder Paz Perez should contact the office.

It’s unclear if the brothers have an attorney who could comment on their behalf.

‼️TWO MEN IN CUSTODY AND A THIRD WANTED FOR THE RAPE OF A JUVENILE ‼️ KENNER – On September 12, 2020, Raul Paz-Perez, 35, Kenner, and Wilmer Paz-Perez, 35, Kenner, were arrested for First Degree Rape involving a juvenile under the age of thirteen. Both are brothers and a third sibling, Elder Paz-Perez, 31, Kenner, is wanted for First Degree Rape. The rape occurred on September 9, 2020, at an address in Kenner, in which the victim resided in the same household as the suspects. The victim first disclosed the rape to a relative on Saturday September 12, 2020, who then reported the incident to the police. All three men were home alone with the victim when they made sexual advances toward the child in which they offered money for sex. The child locked herself in a bedroom. The lock on the bedroom door was defeated by one of the three suspects. After defeating the lock, the three entered the room, undressed the victim, held her down and sexually assaulted her. Raul and Wilmer were arrested Saturday, the same day as the disclosure. Elder Paz-Perez eluded police and is now wanted for L.R.S. 14:42 First Degree Rape. ICE detainers have also been placed on both Raul and Wilmer Paz-Perez. Anyone having any information on the whereabouts Elder Paz-Perez are asked to contact the Kenner Police at (504) 712-2222 or Crimestoppers at (504) 822-1111. #police #policedepartment #kennerla #wanted #publicassistance