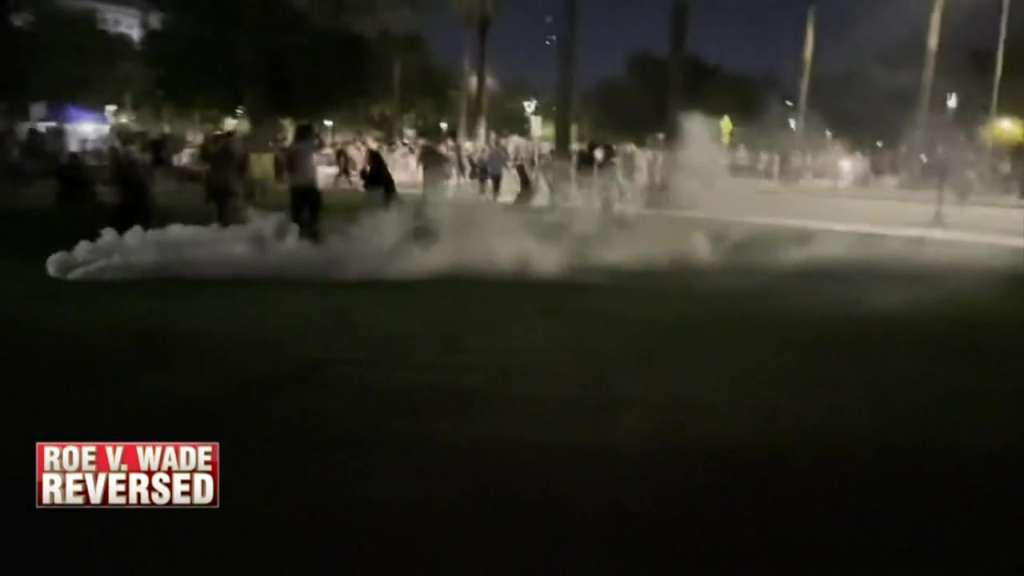 PHOENIX (AP) — Police fired tear gas to disperse anti-abortion demonstrators from outside the Arizona Capitol Friday night, forcing lawmakers to huddle briefly in a basement inside the building as they rushed to complete their 2022 session.

Thousands of protesters had gathered earlier on the Capitol grounds in Phoenix, divided into groups both supporting and condemning the U.S. Supreme Court’s decision overturning Roe v. Wade.

SWAT team members with the Department of Public Safety fired tear gas from second floor of the old Capitol building to disperse protesters in the mall between the current House and Senate buildings. KPHO-TV reported the officers opened fire when several anti-abortion protesters started banging on glass doors of the Senate building.

Authorities said there were no injuries or arrests.

The incident sent Senate lawmakers into the basement for about 20 minutes, said Democratic Sen. Martin Quezada. Stinging tear gas wafted through the building afterward, forcing the Senate to move its proceedings to a hearing room instead of the Senate chamber.

Republicans had enacted a 15-week abortion ban in March, and a pre-Roe law that bans all abortions remains on the books, forcing providers across the state to stop providing abortions earlier Friday.

Republican lawmakers had earlier approved a massive expansion of Arizona’s private school voucher system with only Republican backing. Another top measure was approved with wide bipartisan backing: A major plan to shore up water supplies. The Senate and House both approved a $1 billion plan to increase supplies after adding another $200 million for water conservation efforts.

Senate Republicans pushed though the voucher program that already passed the House. It allows every student in Arizona to take public money to attend private schools, even the nearly 60,000 whose parents are already paying for that instruction.

The vote came after GOP leaders voted to block Democrats from debating or proposing changes to the voucher bill, touching off a heated procedural fight that left Democrats fuming.

About 59,000 private school students would be eligible under the new plan championed by House Majority Leader Ben Toma.

Toma and other advocates say money shouldn’t be a barrier preventing children from attending private schools. Democrats fiercely oppose the bill, saying there is no testing or other mechanism to make sure children are actually learning.

Their efforts to try to add accountability mechanisms, or at least force a vote on the issue, were thwarted when Republicans voted to suspend the rules that would typically allow such changes.

Democrats railed against the measure, saying it would siphon away much of the more than $500 million in new K-12 spending lawmakers enacted earlier this week.

“Its going to cost the state an additional $125 million by 2025,” said Sen. Christine Marsh, a Phoenix Democrat. “This is not just fiscally responsibly for us to be trying to run two separate systems at the same time.”

Republican Sen. T.J. Shope of Coolidge said the measure does not go far enough. “I think in an ideal situation, we would entirely fund the student wherever the parent chooses to send their students,” Shope said.

Lawmakers were also considering a massive new water bill Gov. Doug Ducey called for early this year that is designed to help the state pay for new water sources.

Ducey called for a major new investment in water in his January state of the state address, implying some of that money would be used to build a desalination plant in Mexico. While the money may be used for that, it also can be used for conservation, developing groundwater or possibly importing water from other states.

The House briefly voted down a measure allowing the Department of Corrections, Rehabilitation and Reentry to continue operating for another eight years over bipartisan concerns that the agency is overly secretive and failing to implement reforms suggested by the state auditor. Without the bill passing, the agency’s authorization would expire at the end of the month.

Lawmakers instead voted to impose new transparency requirements on the prison system.

“I’m not asking the department to do anything that they’re not statutorily already required to do,” said Rep. Shawnna Bolick, a Glendale Republican who pushed for the additional requirements. “I just want to make sure that there’s accountability at the end of the day.”

The House and Senate voted on dozens of other bills, most of them uncontroversial measures that passed with bipartisan majorities.

But one of the final votes of the night was a Republican proposal that makes it illegal to teach so-called Critical Race Theory, a hot-button topic for GOP politicians. Democrats called it an assault on public school teachers that will scare them away from teaching about race in America but won’t stop the students.

Republican Sen. J.D. Mesnard said his bill was being misread, that while preventing divisive concepts it will allow subjects like slavery, race and others to be taught.

“I challenge anyone to explain again why promoting or advocating any of these things is OK,” Mesnard asked.

The Legislature adjourned at 12:26 a.m. Saturday.