LEOMINSTER, MASS. (WHDH) - A state trooper and a woman were hospitalized following a violent crash in Leominster overnight that occurred as the trooper was responding to the area of a police pursuit that resulted in the arrest of a Worcester man.

Ronald G. Paris, 35, was arraigned Thursday in Worcester District Court on charges including failure to stop for police, assault with a dangerous weapon, negligent operation of a motor vehicle, driving an unregistered and uninsured motor vehicle. He was ordered held on $2,500 bail after a not guilty plea was entered on his behalf.

The trooper was responding to assist other officers who were chasing Paris’ vehicle on Route 12 when they were involved in a crash with another car just before midnight, according to Massachusetts State Police.

Video from the scene showed twisted metal from the mangled vehicles strewn across the highway.

The 57-year-old woman in the car struck by the police cruiser was taken to Umass Medical Center — Lakeside with critical injuries. She is said to be in serious condition.

The 27-year-old trooper, from Leominster, was treated for minor injuries at Leominster Hospital.

The victim, a native of Townsend, was leaving a Wendy’s when she was struck by the cruiser.

“We just served her food like a minute before she got hit,” an employee told 7NEWS. “She was like checking her bag before she pulled out and then, ‘bam.'” 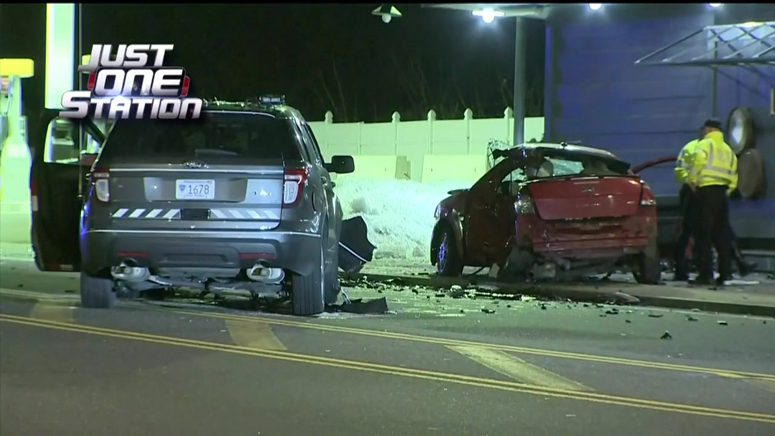 Police say the trooper was operating a gray low-profile cruiser and had their emergency lights and a siren activated at the time of the crash.

Paris, who allegedly triggered the pursuit from Route 290 to Route 190 to Route 12 southbound, was arrested around 12:15 a.m.

Police say the trooper began chasing Paris’ vehicle when he determined his registration had been revoked for an insurance violation. At one point during the chase, officials say he swerved in an apparent attempt to strike a cruiser.

The names of those involved in the crash have not been released.