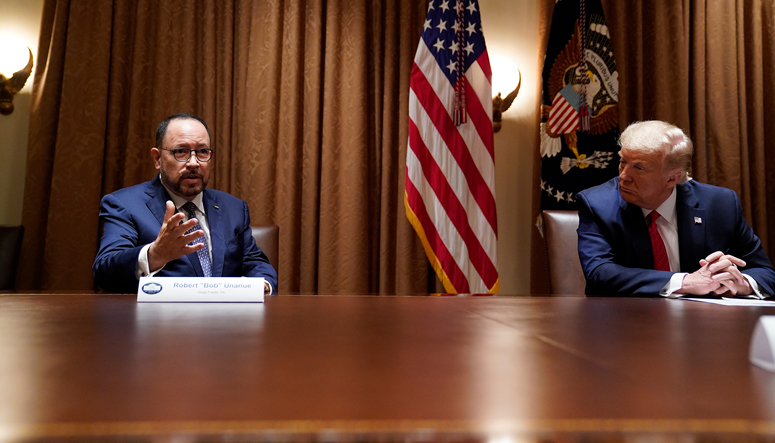 (CNN) — In an interview with Fox News Friday, Goya Foods CEO Robert Unanue said he was “not apologizing” for praising President Donald Trump at the White House.

On “Fox & Friends,” Unanue told co-hosts Steve Doocy, Emily Compagno and Brian Kilmeade that “it was good to talk to some friends,” and he called the boycott movement “suppression of speech.”

He claimed a double standard in the reaction to his laudatory remarks about Trump, noting that he accepted an invitation from Michelle Obama in 2012 to an event in Tampa, Florida, to promote the former first lady’s healthy-eating initiative.

“You’re allowed to talk good or talk praise to one president but you’re not — when I was called to be part of this commission to aid in economic and educational prosperity and you make a positive comment, all the sudden that’s not acceptable,” Unanue told Fox News. “If you’re called by the president of the United States, you’re going to say, ‘No I’m sorry, I’m busy, no thank you?’ I didn’t say that to the Obamas and I didn’t say that to President Trump.”

In brief remarks at the White House Thursday, Unanue compared Trump to his grandfather, a Spanish immigrant who in 1936 founded Goya.

“We are all truly blessed … to have a leader like President Trump who is a builder,” Unanue said during the Rose Garden speech. “That is what my grandfather did. He came to this country to build, to grow, to prosper. We have an incredible builder, and we pray. We pray for our leadership, our president.”

The fact that Unanue would associate with Trump was sufficient to anger many people, including Congresswoman Alexandria Ocasio-Cortez and former Housing and Urban Development Secretary Julián Castro, who acknowledged Goya’s “staple” status in Latino households, but encouraged people to reconsider buying Goya after Unanue’s White House appearance.

President Trump is unpopular among Hispanic Americans. Hispanics favor Vice President Joe Biden over Trump in the race for president by a 36 percentage-point margin, according to the latest New York Times/Siena College poll.

Unanue was invited to the White House as part of President Trump’s executive order aimed at improving Hispanic Americans’ access to educational and economic opportunities.

In brief remarks at the White House Thursday, Unanue announced Goya would donate 1 million cans of Goya chickpeas and 1 million other food products to American food banks. He said the company wanted to help families hurt by the coronavirus pandemic.

A Goya spokesman said the purpose of Unanue’s White House appearance was to announce the donation and support Trump’s initiative. Goya did not comment on the boycott calls.