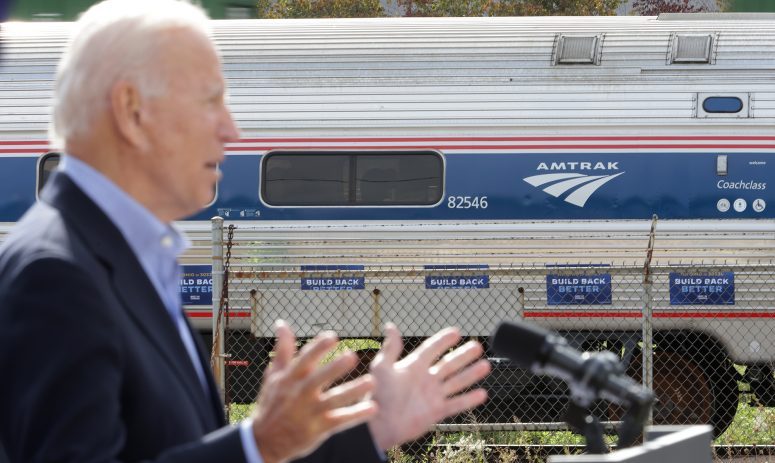 (CNN) — President Biden, sometimes called “Amtrak Joe” for his train enthusiasm, appears to be living up to the name.

The $2 trillion infrastructure plan Biden released this week calls for $80 billion to improve American train service. Rail experts say it’s the biggest commitment to rail travel in more than a generation and will revitalize a transportation mode that’s long lacked the public investment that road and air travel receive. They say that a lack of consistent public funding has long hobbled American rail service.

Amtrak, the largest passenger rail provider in America, said this week that it plans to upgrade and expand service, including as many as 30 new routes and more trains on 20 existing routes. Service would begin in cities like Nashville, Tennessee, Columbus Ohio, Phoenix, Arizona and Las Vegas, Nevada, pending approval from Congress.

Trains would be sped up between Boston and DC, which is Amtrak’s busiest and most profitable route. Amtrak declined to say how much speeds would increase, or how many more trains would be added, though true high speed rail, defined as speeds over 186 mph, is unlikely without even larger upgrades and new rights of way along existing routes.

The Biden rail push is a sea change from years of Amtrak struggling to find funds to operate. Joseph Schwieterman, a DePaul professor who studies rail, said he’s lived through a dozen crises of potential massive budget cuts that have set off alarm bells for rail advocates.

“It’s hard to plan new routes and build an efficient network while sitting on the edge of a financial cliff,” Schwieterman told CNN Business. “The stars are aligning for rail in ways I haven’t seen for a long time.”

Rail experts say that in many parts of the US, trains run at slow speeds, sometimes less than 50 mph, because investments haven’t been made to maintain tracks. In other parts of the country, rail service is woefully nonexistent, they say.

Several rail experts highlighted the difficulties of traveling by rail between Chicago and Houston, two of the five largest metro areas in the United States.

No direct route is available. A passenger has to disembark and take a bus for a stretch of the trip. An alternative is to travel out of the way through New Orleans, though such a trip is especially unappealing because trains from New Orleans to Houston run only a few times a week. For comparison’s sake, there’s an average of 74 direct flights a day between Chicago and Houston, according to Kayak, the travel booking website.

“It’s pretty pathetic. We’re running a third-world passenger rail system in many instances,” James McCommons, the author of Waiting on a Train and a professor at Northern Michigan University, told CNN Business.

Jim Mathews, CEO of the Rail Passenger Association, which advocates for rail travel, said that even getting average passenger train speeds to 79 mph would be a meaningful improvement

He said that a massive investment like what Biden proposed is needed and will bring economic benefits.

“There’s a real hunger for something new and for something more,” Mathews said. “Rail in this country has been left behind for close to 100 years.”

Amtrak may have to transform itself to seize the potential opportunity and avoid a backlash if the money is perceived as being used irresponsibly. The agency has long been pushed to be profitable, a demand rail advocates say is unreasonable because it is not expected of the government’s investments in other transportation modes like highways and airports. Amtrak is mandated by Congress to serve as much of the nation as possible, even on deeply unprofitable routes.

Alex Kummant, who was the president of Amtrak from 2006-2008, said that any business or management team may have challenges dealing with a sudden increase in funding and operations. More rail cars and facilities will need to be built and managed.