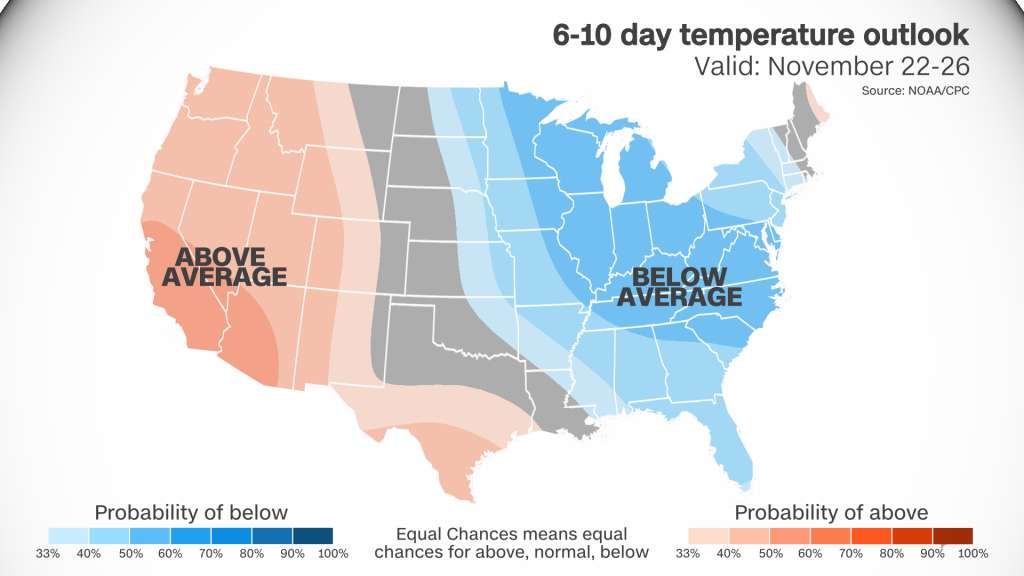 Below-average temperatures are likely in the East, while the West will be warmer than average. Credit: CNN Weather

(CNN) — Holiday travel was reduced by the pandemic last year, but this time round it’s expected to look more like business as usual — with crowded airports and train stations and interstates turned into either parking lots or unofficial road races.

And while the weather might not stop the masses from traveling this year, a potentially significant storm system in the East could put a wrinkle in Thanksgiving travel plans for many.

There are still plenty of reasons for meteorologists to hedge their bets on next week’s potential storm. Many technical atmospheric ingredients need to align for this storm to have dire impacts on holiday travel. Usually, meteorologists don’t like to forecast a storm with this many variables this far in advance because many things are likely to change.

Some of the forecast computer models have shown this potential storm for over 48 hours. With this consistency in the overall pattern, there is some increased confidence that there will be some impact from either strong winds, rain, or perhaps even snow from Chicago to New York.

“This storm remains a prominent weather focus due to its timing right before Thanksgiving but it will likely still take a while to resolve the details,” the WPC says.

This is very true. The storm will have much worse impacts on the major East Coast cities if and when a separate, secondary storm center forms off the East Coast on Monday into Tuesday.

“A lot of uncertainty in the forecast Sunday night and into early next week, so forecast has low confidence especially in terms of exact precipitation amounts, winds, and the timing of higher winds and precipitation,” the National Weather Service in New York said Wednesday.

This far out the best forecast guidance shows that “from Monday onward, the most likely evolution of this system would bring more of an enhanced rainfall threat to New England, ahead of the cold front/secondary low development,” according to the WPC.

The best snow potential would likely be from lake effect snow on the Great Lakes and along the Appalachians, from the Carolinas northeastward.

“There is still enough uncertainty in system evolution to allow for other possibilities regarding precipitation types and amounts,” the WPC said.

Confidence is higher on the possibility of strong winds sweeping through the Plains to the East behind the storm. These winds can be just as disruptive to travel as any precipitation.

“By Monday and Tuesday the eastern half of the country will be in a severely deep trough. This means the jet stream will look like a giant U right over the Great Lakes to the Northeast,” said CNN meteorologist Chad Myers.

“Models are predicting wind speeds inside the jet stream to be over 190 mph in places. Pilots will be looking for the smoothest air to fly in, but many passengers are sure to hear ‘Ladies and gentlemen, please keep your seat belts securely fastened.'”

What is most certain about this system is temperatures will be much colder after it passes from the Great Lakes to the Northeast and into the South.

The plunging cold temperatures are certain

The temperatures in the East will change like the emotions during a family Thanksgiving dinner over the next week.

One day it will be warm, then the next unseasonably cold, then unseasonably warm and then cold all over again.

The first colder air mass will infiltrate the East over the next couple of days and into the weekend. Temperatures will run about 10 to 15 degrees below normal for this time of the year and rebound back to average by Sunday.

“The next surge of colder air will spread across the eastern half of the lower 48 Monday-Tuesday with the broadest coverage of highs 10-15F below normal expected on Tuesday,” the WPC says.

There is a good chance that most in the East during Thanksgiving week will see below-average temperatures.

For example, New York will likely be just above freezing for anyone that might venture out to watch a parade. When the quintessential Thanksgiving touch football game happens in the park, it will likely only peak just above 50 degrees.

A reenforcing shot of cold air arrives at the end of the week to keep much of the East below normal through the weekend after Thanksgiving.

The only other thing that is certain is that the closer we get to the storm, the more reliable the forecast will be. That and that turkey will be served countrywide next week.