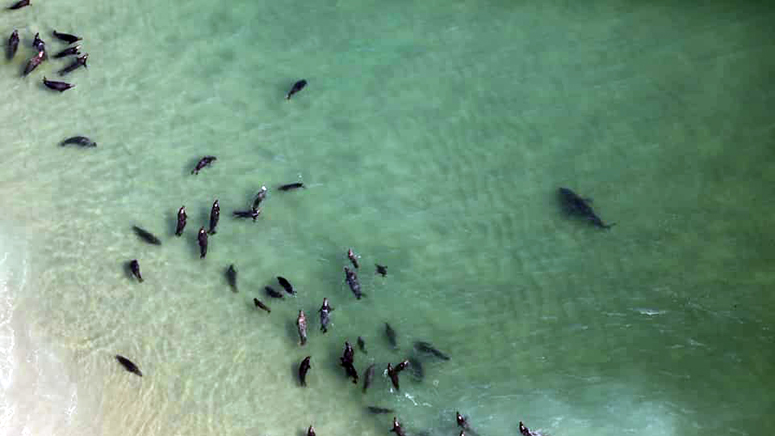 (WHDH) — Researchers are prepared to battle the cold into November as they continue to study the behavior of great white sharks that are still lurking off the coast of Massachusetts.

The Atlantic White Shark Conservancy on Friday shared a photo recently taken by an aerial spotter of a shark swimming near a large group of seals in the water off Cape Cod.

“The team will battle the cold into November to continue to tag and collect data to learn more about the behavior of white sharks off our coast,” the Conservancy said in a tweet.

There were dozens upon dozens of shark sightings in the water off the Cape over the summer.

Sharks typically depart the waters off the Cape in late fall and migrate to points off the Southeastern coast of the United States and the Gulf of Mexico, according to the Massachusetts Shark Research Program.

Larger sharks tend to move into the open Atlantic to as far as the Azores.

Many of the tagged sharks return to the Cape each year.

Images by Spotter Pilot Wayne Davis from the last research trip. The team will battle the cold into November to continue to tag and collect data to learn more about the behavior of white sharks off our coast. pic.twitter.com/CDPz4p1Ted