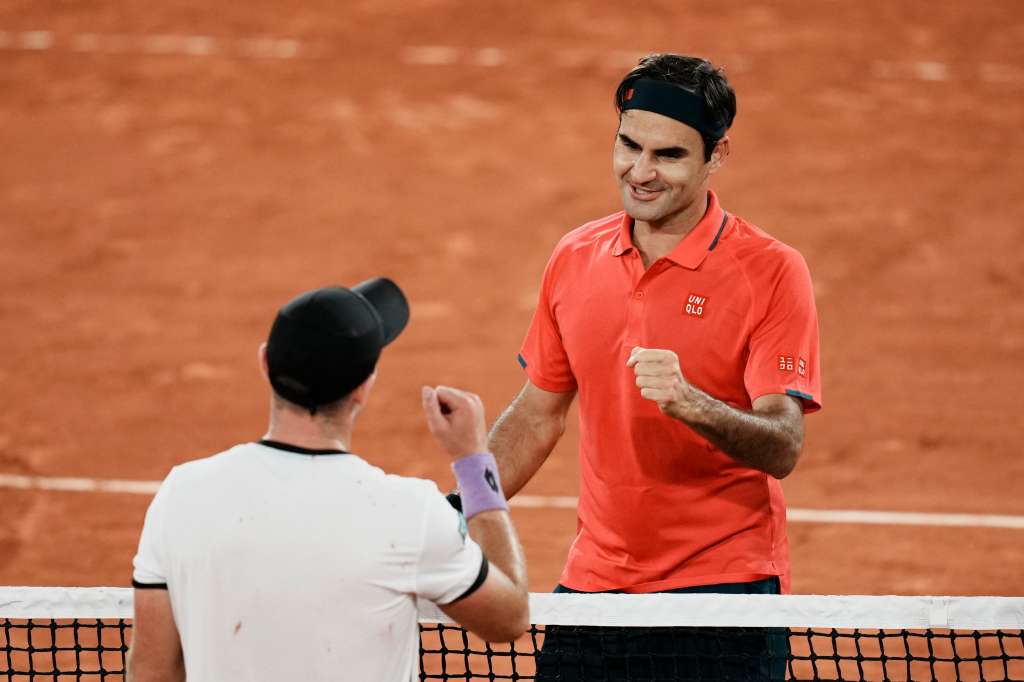 Switzerland's Roger Federer, right goes to shake hands with Germany's Dominik Koepfer, after defeating him in their third round match on day 7, of the French Open tennis tournament at Roland Garros in Paris, France, Saturday, June 5, 2021. (AP Photo/Thibault Camus)

Roger Federer withdrew from the French Open on Sunday to give himself a chance to recover after emerging from a tight third-round victory that lasted about 3 1/2 hours.

“After two knee surgeries and over a year of rehabilitation it’s important that I listen to my body and make sure I don’t push myself too quickly on my road to recovery,” the 20-time Grand Slam champion said in a statement released by the French tennis federation. “I am thrilled to have gotten 3 matches under my belt. There is no greater feeling than being back on court.”

Federer, who turns 40 on Aug. 8, was competing in his first major tournament since the 2020 Australian Open. Shortly after that event, he had the first of a pair of operations on his right knee.

He had played just three matches this season before arriving in Paris for the clay-court Slam, which he won in 2009.

Federer had made clear last month that he did not see himself as ready to contend for the French Open title this time and instead had his sights on Wimbledon, the grass-court major he has won a men’s-record eight times. Play begins at the All England Club on June 28.

The No. 8-seeded Federer was supposed to play No. 9 seed Matteo Berrettini of Italy in the fourth round on Monday.

The winner of the match will face either No. 1 Novak Djokovic or unseeded Lorenzo Musetti in the quarterfinals.

“The Roland Garros tournament is sorry about the withdrawal of Roger Federer, who put up an incredible fight last night,” tournament director Guy Forget said in a statement. “We were all delighted to see Roger back in Paris, where he played three high-level matches. We wish him all the best for the rest of the season.”