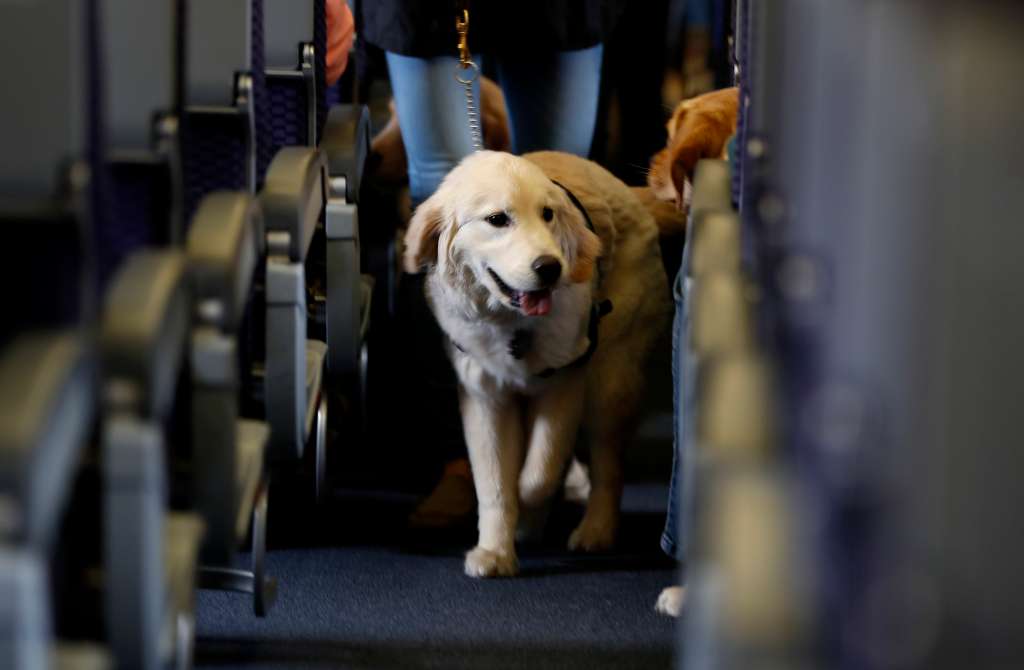 FILE - In this April 1, 2017 file photo, a service dog strolls through the isle inside a United Airlines plane at Newark Liberty International Airport while taking part in a training exercise in Newark, N.J. (AP Photo/Julio Cortez, File)
CNN

The DOT rule, announced last month, defines a service animal as a dog “trained to do work or perform tasks for the benefit of a qualified individual with a disability.”

Delta, United, Alaska, JetBlue and American Airlines are among US carriers that will no longer allow emotional support animals.

The animals are prescribed by mental health professionals to provide comfort and support, but unlike service animals, emotional support animals are not required to have training in specific tasks.

Delta will honor reservations involving emotional support animals confirmed prior to January 11, 2021, but the airline will not accept any new reservations for such animals.

United Airlines will continue to accept the animals for reservations booked before January 11, 2021, for travel on or before February 28, 2021. Alaska Airlines is also using this date range in phasing out transporting emotional support animals.

JetBlue confirmed that it will no longer accept new bookings for emotional support animals after January 11, 2021.

The airline will allow existing itineraries involving the animals to proceed through the end of February, if “all required and appropriate documentation was submitted as requested of those customers by December 20, 2020,” the airline said in a statement.

“We’re confident this approach will enable us to better serve our customers, particularly those with disabilities who travel with service animals, and better protect our team members at the airport and on the aircraft,” said Jessica Tyler, president of cargo and vice president of airport excellence for American, in a news release.

Southwest Airlines has not changed its emotional support animals policy, but said that it will announce any policy changes and a timeline for those changes this year.

Airlines may require passengers traveling with service animals, now limited to dogs by the DOT definition, to submit a DOT form in advance of traveling detailing a service animal’s health, behavior and training.

Concern that passengers were fraudulently passing off their pets as the more loosely defined and fee-free category of emotional support animals is part of what prompted airlines to ask the DOT to review this issue.

The DOT rule was also prompted by an increase in service animal complaints from passengers with disabilities, misbehavior by emotional support animals, a lack of clarity around the definition of “service animal” and disruptions caused by “requests to transport unusual species of animals onboard aircraft,” according to the DOT.

Pigs and peacocks are among the unexpected animals that have previously flown as emotional support animals.