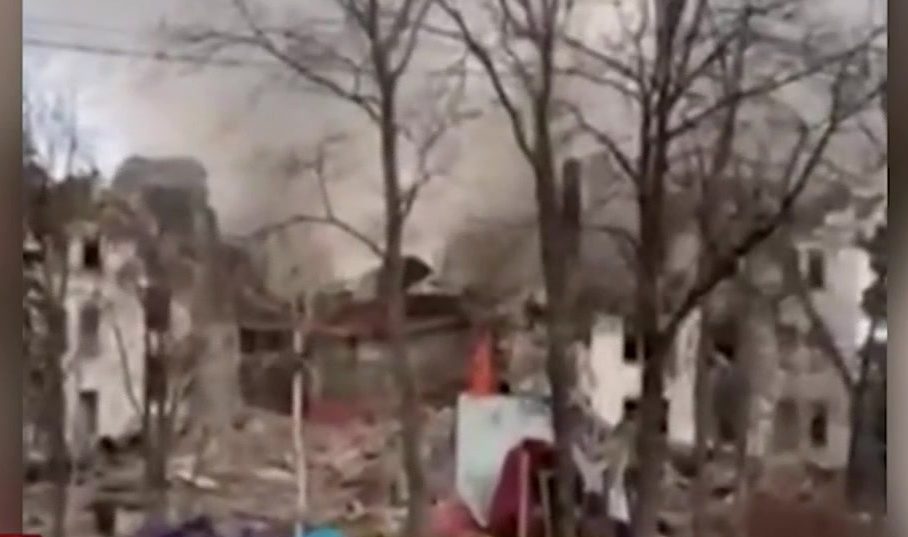 POKROVSK, Ukraine (AP) — Concern mounted Saturday over the fate of the Ukrainian fighters who became Moscow’s prisoners as Russia claimed seizure of the steel plant-turned-fortress in Mariupol, capping a nearly three-month siege that left the strategic port city in ruins and more than 20,000 city residents feared dead.

The Russian Defense Ministry released video of Ukrainian soldiers being taken into custody after announcing that its forces had removed the last holdouts from the plant’s miles of underground tunnels. The Azovstal steel plant became a symbol of Ukrainian tenacity, and its seizure delivers Russian President Vladimir Putin a badly wanted victory in the war he began in February.

Family members of the steel mill fighters, who authorities say came from a variety of military and law enforcement units, have pleaded for them to be given rights as prisoners of war and eventually returned to Ukraine. They are considered heroes by their fellow citizens.

But Denis Pushilin, the pro-Kremlin head of an area of eastern Ukraine controlled by Moscow-backed separatists, said the Ukrainians were sure to face a tribunal for their wartime actions.

“I believe that justice must be restored. There is a request for this from ordinary people, society, and, probably, the sane part of the world community,” Russian state news agency Tass quoted Pushilin as saying.

Russian officials and state media have sought to characterize the fighters as neo-Nazis and criminals. Among the plant’s more than 2,400 defenders were members of the Azov Regiment, whose far-right origins have been seized on by the Kremlin as part of an effort to cast its invasion as a battle against Nazi influence in Ukraine.

The Ukrainian government has not commented on Russia’s claim of capturing Azovstal, which for weeks remained Mariupol’s last holdout of Ukrainian resistance.

Ukraine’s military this past week told the fighters holed up in the plant, hundreds of them wounded, that their mission was complete and they could come out. It described their extraction as an evacuation, not a mass surrender.

The end of the battle for Mariupol would help Putin offset some stinging setbacks, including the failure of Russian troops to take over Ukraine’s capital, Kyiv, the sinking of the Russian Navy’s flagship in the Black Sea and the continued resistance that has stalled an offensive in eastern Ukraine.

It also furthers Russia’s quest to essentially create a land bridge from Russia stretching through the Donbas region to the Crimean Peninsula, which Moscow annexed from Ukraine in 2014.

The impact on the broader war remained unclear. Many Russian troops already had been redeployed from Mariupol to elsewhere in the conflict, which began when Russia invaded its neighbor on Feb. 24.

Russian Defense Ministry spokesman Igor Konashenkov reported Saturday that Russia destroyed a Ukrainian special-operations base in the Black Sea region of Odesa as well as a significant cache of Western-supplied weapons in northern Ukraine’s Zhytomyr region. There was no confirmation from the Ukrainian side.

In its morning operational report, the Ukrainian military general staff reported heavy fighting in much of eastern Ukraine, including the areas of Sievierodonetsk, Bakhmut and Avdiivka.

After failing to capture Kyiv, Russia focused its offensive on the country’s eastern industrial heartland. The Russia-backed separatists have controlled parts of the Donbas region since 2014, and Moscow wants to expand the territory under its control.

Ukraine’s president, Volodymyr Zelenskyy, said he would not launch a counterattack into Russian territory but emphasized that the Donbas region remains sovereign to Ukraine.

Speaking at a joint media conference with Portuguese Prime Minister Antonio Costa, Zelenskyy said his forces were fighting to “liberate our territory” and the price of “tens or hundreds of thousands of lives” was too high to surrender it.

He pressed Western countries for multiple launch rocket systems, which he said “just stand still” in other countries yet are “key” to Ukraine’s success.

U.S. President Joe Biden signed off Saturday on a fresh, $40 billion infusion of aid for Ukraine, with half for military assistance. Portugal pledged up to 250 million euros, as well as continued shipments of military equipment.

Mariupol, which is part of the Donbas, was blockaded early in the war and became a frightening example to people elsewhere in the country of the hunger, terror and death they might face if the Russians surrounded their communities.

The seaside steelworks, occupying some 11 square kilometers (4 square miles), was a battleground for weeks. Drawing Russian airstrikes, artillery and tank fire, the dwindling group of outgunned Ukrainian fighters held out with the help of airdrops.

Zelenskyy revealed in an interview published Friday that Ukrainian helicopter pilots braved Russian anti-aircraft fire to ferry in medicine, food and water to the steel mill as well as to retrieve bodies and rescue wounded fighters.

A “very large” number of the pilots died on the missions, he said. “They are absolutely heroic people, who knew that it would be difficult, knew that to fly would be almost impossible,” Zelenskyy said.

Russia claimed that the Azov Regiment’s commander was taken from the plant in an armored vehicle because of residents’ alleged hatred for him, but no evidence of Ukrainian antipathy toward the nationalist regiment has emerged.

The Russian Defense Ministry on Saturday released video of Russian troops taking into custody Serhiy Volynskyy, the commander of the Ukrainian Navy’s 36th Special Marine Brigade, which was one of the main forces defending the steel plant. The Associated Press has not been able to independently verify the date, location and conditions of the video.

With Russia controlling the city, Ukrainian authorities are likely to face delays in documenting evidence of alleged Russian atrocities in Mariupol, including the bombings of a maternity hospital and a theater where hundreds of civilians had taken cover. Satellite images in April showed what appeared to be mass graves just outside Mariupol, where local officials accused Russia of concealing the slaughter by burying up to 9,000 civilians.

An estimated 100,000 of the 450,000 people who resided in Mariupol before the war remain. Many, trapped by Russia’s siege, were left without food, water and electricity.

An aide to Mariupol’s mayor alleged Saturday that Russian forces were blocking all routes from the city and warned displaced residents not to return to retrieve personal belongings.

“As of today, any evacuation from the city becomes impossible until the opening of separate corridors,” Pedro Andryushchenko wrote on Telegram.

The chief executive of Metinvest, a multinational company that owns the Azovstal plant and another steel mill, Ilyich, in Mariupol, spoke of the city’s devastation in an interview published Saturday in Italian newspaper Corriere della Sera.

“The Russians are trying to clean it (the city) up to hide their crimes,” Metinvest CEO Yuriy Ryzhenkov said. ”The inhabitants are trying to make the city function, to make water supplies work again.”

“But the sewer system is damaged, there has been flooding, and infections are feared” from drinking the water, he said.

The Ilyich steelworks still has some intact infrastructure, but if the Russians try to get it running, Ukrainians will refuse to return to their jobs there, Ryzhenkov said.

“We will never work under Russian occupation,” he said.