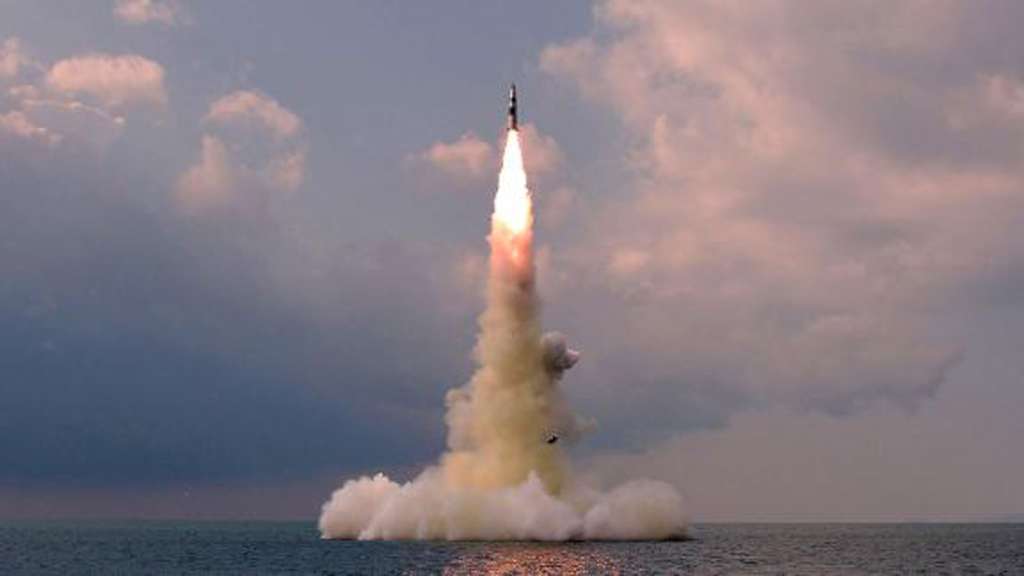 This picture taken on October 19, 2021 and released from North Korea's official Korean Central News Agency (KCNA) on October 20, 2021 shows test fire of a new type submarine-launched ballistic missile in an undisclosed location in North Korea. (Photo by various sources / AFP) / South Korea OUT / ---EDITORS NOTE--- RESTRICTED TO EDITORIAL USE - MANDATORY CREDIT "AFP PHOTO/KCNA VIA KNS" - NO MARKETING NO ADVERTISING CAMPAIGNS - DISTRIBUTED AS A SERVICE TO CLIENTS / THIS PICTURE WAS MADE AVAILABLE BY A THIRD PARTY. AFP CAN NOT INDEPENDENTLY VERIFY THE AUTHENTICITY, LOCATION, DATE AND CONTENT OF THIS IMAGE --- / (Photo by STR/AFP via Getty Images)

SEOUL, South Korea (AP) — South Korea dismissed North Korea’s claim to have recently launched a hypersonic missile as an exaggeration on Friday, saying it was a normal ballistic missile that could be intercepted.

The assessment is certain to anger North Korea. South Korea has previously avoided publicly disputing North Korea’s weapons tests, apparently so as not to aggravate relations.

It said in a report that what North Korea fired on Wednesday was a type of ballistic missile that was displayed in October during a weapons exhibition in Pyongyang, its capital. It said South Korean and U.S. forces could shoot it down.

The ministry said North Korea’s claim that the weapon flew 700 kilometers (435 miles) and maneuvered laterally appeared to be an exaggeration. Ministry officials said the claim was likely aimed at a domestic audience to boost public confidence in its missile program.

North Korean leader Kim Jong Un has been calling for greater unity and improved weapons development in the face of pandemic-related difficulties. He has refused to return to disarmament talks with Washington and Seoul while maintaining tough anti-virus restrictions.

The U.N. Security Council will hold closed consultations on the North Korean launch and receive a briefing from Assistant-Secretary-General Khaled Khiari on Monday afternoon, council diplomats said Friday, speaking on condition of anonymity ahead of an official announcement. The meeting was requested by the United States, United Kingdom, France, Ireland and Albania.

Wednesday’s launch was North Korea’s second claimed hypersonic missile test. Its state media said the missile made a 120-kilometer (75-mile) lateral movement before precisely hitting a target 700 kilometers away, and that the test confirmed the weapon’s flight control and stability.

Hypersonic weapons, which fly at speeds in excess of Mach 5, or five times the speed of sound, could pose a crucial challenge to missile defense systems because of their speed and maneuverability. The weapon was on a wish-list of sophisticated military assets that Kim unveiled early last year along with multi-warhead missiles, spy satellites, solid-fueled long-range missiles and underwater-launched nuclear missiles.

In September, North Korea said it had conducted its first flight test of a hypersonic missile.

The South Korean Defense Ministry report said Wednesday’s launch didn’t show evidence of any technological progress since the September test. South Korea’s military earlier said the missile tested in September was at an early stage of development and that the country would need considerable time to deploy it operationally.

The ministry said South Korean missiles are superior to North Korea’s in terms of the destructive power of their warheads and precision guidance.

Photos show that the upper parts of the missiles launched in September and this week have different shapes. That suggests that North Korea might have tested two versions of warheads for a missile still under development or is actually developing two different types of missiles, according to Lee Choon Geun, honorary research fellow at South Korea’s Science and Technology Policy Institute.

South Korea’s current liberal government has been pushing hard to improve ties with North Korea. But its appeasement policy has made little progress since a broader nuclear diplomacy between Pyongyang and Washington collapsed in 2019. South Korea is to elect a new president in March.