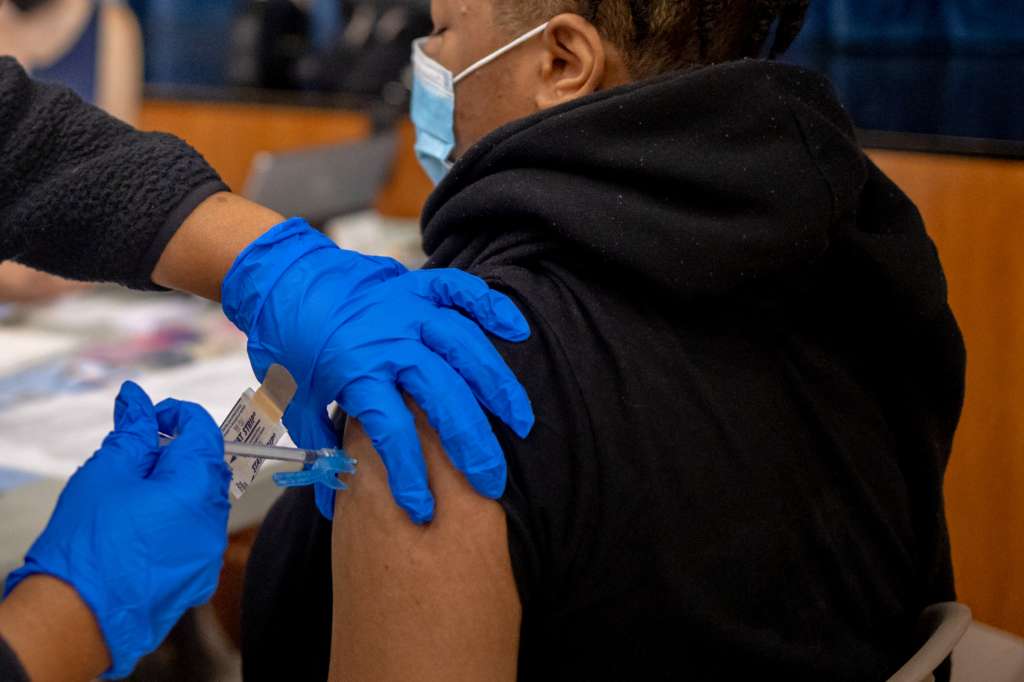 A healthcare worker administers a dose of the Pfizer-BioNTech Covid-19 vaccine to a teenager at West Philadelphia High School in Philadelphia, Pennsylvania, U.S., on Tuesday, August 4, 2021. The White House has called upon schools, community organizers, and even the Gen Z pop star Olivia Rodrigo to double down on pitching the vaccines benefits before the school year starts. Photographer: Hannah Beier/Bloomberg via Getty Images

(CNN) — As kids return for a new school year and Covid-19 cases rise among younger age groups, vaccine mandates in schools may become the only way forward, a vaccine expert said.

“So far, we’ve not seen a lot of Covid vaccine mandates, even for the teenagers,” vaccinologist and dean of the National School of Tropical Medicine at Baylor College of Medicine Dr. Peter Hotez told CNN. “It’s gonna have to happen if we’re going to get kids through the school year.”

Cases have risen “exponentially” among children, with the weekly count of 243,373 new cases showing about a 240% increase compared with the week of July 22-29, data published Monday from the American Academy of Pediatrics shows.

Much of the country is feeling the impacts of Covid-19’s spread. Hospitals are overwhelmed by a rise in patients, relying on reinforcements to treat the influx — and some are barely coping.

“The only reason we are holding this lifeboat together is I have a federal disaster medical assistance team here, 14 people who have just been heroes to us. And, unfortunately, their deployment is over on Friday,” Dr. William Melahn, the chief medical officer for St. Claire Health Care in Kentucky, told CNN on Monday. “I’m going to lose 14 health care professionals, and I literally have no idea what we’re going to do on Friday.”

Vaccinations are the strongest form of protection against the virus, but only Americans 12 years old and older are eligible. Studies for vaccines for younger children are underway, and younger children will be vaccinated by the end of the year, said US Centers for Disease Control and Prevention Director Dr. Rochelle Walensky.

“We’re waiting for the companies to submit the data to the FDA, we’re anticipating that will happen in the fall,” she told NBC’s “Today.”

Until vaccines are available for younger children, health agencies have promoted using masking, testing, ventilation and distancing to keep kids safe. And those measures will likely have to stay in place until there is a combination of high vaccination rates and low rates of disease spread, Walensky said.

Local leaders at odds against mandates

There has already been tension in various states over mandates for both vaccines and masking.

Despite Texas Gov. Greg Abbott’s restrictions on who can mandate vaccinations, the San Antonio Independent School District has required district employees to be vaccinated against the virus. Texas Attorney General Ken Paxton filed a lawsuit Monday against the district and Superintendent Pedro Martinez over the mandate.

“The decision to openly violate state law and devote district resources to defending Superintendent Martinez’s unlawful actions is irresponsible,” Paxton said in a news release. “But if school districts decide to use their limited funding to try to get away with breaking the law, my office will oppose them and uphold the rule of law in Texas.”

Following President Joe Biden’s announcement that businesses of more than 100 employees must require their workforce to get vaccinated or regularly tested, Florida Gov. Ron DeSantis has said that cities and counties in Florida requiring employees to show proof of vaccination or post-infection recovery will face $5,000 fines per violation.

The mayor of Orange County, Florida, said that although the consequences could be costly, the county will not overlook the well-being of its community.

“It could be a lot of money. There is no question about it,” Mayor Jerry Demings said at a news conference in reference to the fines. “At the end of the day, it is all of our goal to protect the greater collective of the people in our community, to keep them safe. That’s the fundamental role of government.”

In Iowa, a federal judge issued a temporary restraining order on Monday that will allow the state’s school districts to mandate masks in classrooms. The state will appeal, said Gov. Kim Reynolds, who signed a law in May that bans local entities and school districts from issuing their own mask mandates.

“Today, a federal judge unilaterally overturned a state law, ignored the decision by our elected legislature and took away parents’ ability to decide what’s best for their child,” Reynolds said.

There is also is a debate over the need for, and the timing of, vaccine booster doses.

The Biden administration had announced plans to roll out a third dose as early as next week, pending FDA approval, but some experts say it is not needed yet.

But an international group of vaccine scientists, including some from the US Food and Drug Administration and the World Health Organization, published a paper Monday in The Lancet saying the current evidence does not appear to support a need for booster shots in the general public right now.

The authors of the paper include two senior FDA vaccine leaders, Dr. Philip Krause and Marion Gruber, who will be stepping down in October and November, the FDA announced late last month.

Hotez, for his part, said he has seen evidence that boosters may “keep people out of the hospital, prevents long Covid … and could restore interrupting asymptomatic transmissions.”

“From the data from Israel, I come out strongly in favor of the boosters,” Hotez said.

The FDA is scheduled to meet about boosters Friday, though the agency has been late in getting data to its panel of outside vaccine experts, two sources told CNN. Committee members will receive materials ahead of the meeting, an FDA spokesperson told CNN.

“Our vaccine team is working around the clock on many priorities, including preparing for Friday’s (Vaccines and Related Biological Products Advisory Committee) meeting,” Stephanie Caccomo said.