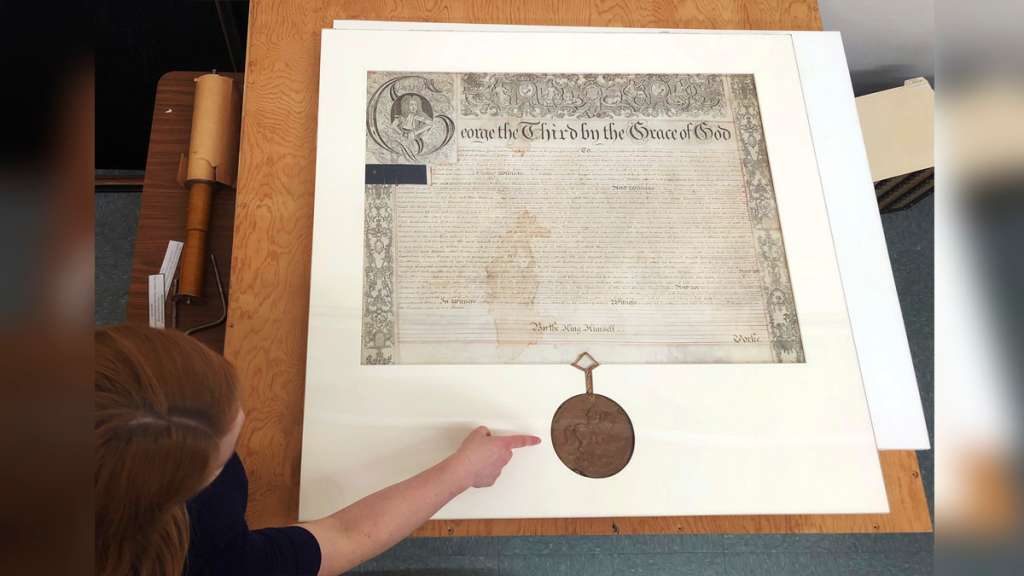 FILE - Rhode Island state archivist Ashley Selima points to the seal of King George III on a September 1772 proclamation in Providence, R.I., May 24, 2018. The document established a commission to investigate the burning of the British schooner HMS Gaspee by colonists in Narraganset Bay in June 1772. A new effort is underway to find the remains of the British ship that Rhode Island colonists burned 250 years earlier, marine archeologists and state officials announced, Tuesday, May 10, 2022. (AP Photo/Jennifer McDermott, File)

A new effort is underway to find the remains of a British ship that Rhode Island colonists burned 250 years ago, marine archaeologists and state officials announced Tuesday.

The June 10, 1772, burning of the HMS Gaspee was an an act of rebellion that some proud Rhode Islanders maintain was just as important in sparking the American Revolution as the Boston Tea Party more than a year later.

Yet schoolchildren rarely learn of it in history class.

The effort to find evidence of the ship in the waters off of Warwick could bring more attention to the sinking, said state Rep. Joseph McNamara, who has been involved in efforts to find the ship for years.

The latest search that will start in July is being conducted by the Rhode Island Marine Archaeology Project using more than $30,000 in privately raised funds, he said. There have been previous searches for the Gaspee, but this time archaeologists will use the latest sonar technology, he said.

“The Gaspee was burned to the waterline,” he said. “So we’d be looking for the quadrant of a hull, or a debris field that could tell us about the crew and how they conducted themselves.”

Debris could include pieces of metal, ceramic or flint, among other things, he said.

The Gaspee was sent to Narragansett Bay to enforce trade laws and thwart smugglers. The colonists were soon fed up with the Gaspee under the leadership of Lt. William Dudingston for stopping ships and disrupting trade.

When the ship ran aground while chasing a suspected smuggler, several prominent colonists heard the news and rowed out to it before it could refloat on the next high tide, according to historian Steven Park’s book on the incident. The colonists looted the ship, shot the captain (he survived), and set it on fire.

The British crown offered a reward for the suspects, but no one ever turned them in.

The sinking is celebrated every year at the Gaspee Days festival in Warwick, which includes the ceremonial burning of a miniature model of the ship.