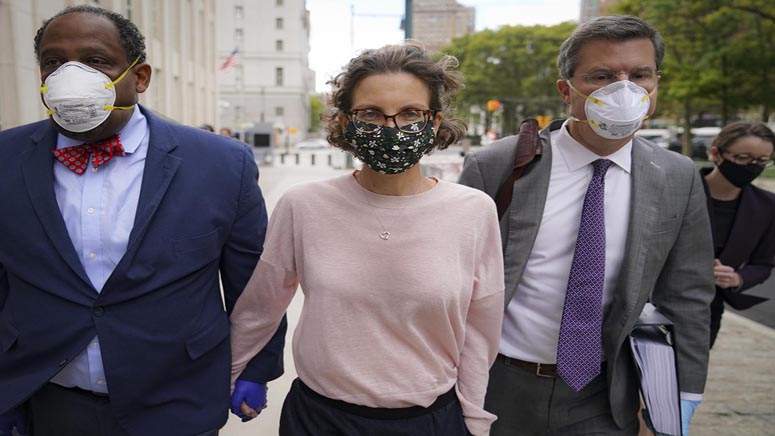 Clare Bronfman arrives to federal court, Wednesday, Sept. 30, 2020, in the Brooklyn borough of New York. Bronfman, the Seagram's liquor fortune heir and a wealthy benefactor of Keith Raniere, the disgraced leader of a self-improvement group NXIVM in upstate New York convicted of turning women into sex slaves who were branded with his initials, faces sentencing Wednesday in the federal conspiracy case. (AP Photo/John Minchillo)
CNN

(CNN) — Clare Bronfman, heiress to the Seagram liquor fortune, was sentenced to nearly seven years in prison Wednesday — more than the five-year sentence prosecutors had recommended.

Bronfman was remanded to custody shortly after the hearing. Her attorney told CNN she plans to appeal immediately.

Bronfman, 41, is the first member of Nxivm, a company that marketed self-improvement programs, to be sentenced in the federal case that resulted in the cult-like group’s founder Keith Raniere being convicted of sex trafficking, racketeering, sexual exploitation of a child and human trafficking charges.

Bronfman has spent the last two years in home confinement and was seen entering federal court in Brooklyn wearing a dark floral mask and clutching the hand of one of her attorneys.

Bronfman was one of five co-conspirators indicted on racketeering charges in connection with Raniere’s case, but her sentence was in connection with two charges she pleaded guilty to in April 2019 which included conspiracy to conceal and harbor people who were not in the US legally for financial gain, as well as fraudulent use of identification.

While Bronfman pleaded guilty to those two charges, she has said she was not aware of the allegations of abuse surrounding a secret, all-female group within Nxivm known as DOS.

US District Judge Nicholas Garaufis said in his hour-long reading of her sentence, that while she was not convicted of racketeering, sex trafficking and other charges as Raniere was, her case was “not about an isolated incident of credit card fraud or a run-of-the-mill case of harboring illegal aliens for financial gain.”

“Ms. Bronfman’s crimes were not committed in a vacuum,” Garaufis said. “They were committed in connection with her role in Nxivm and her close relationship with Raniere, and I believe that it would be inappropriate for me to consider them divorced from that context.”

Garaufis also said he believes there may be aspects of Raniere’s crimes with which Bronfman “very well may not have been familiar,” and agreed with her defense team that evidence did not show she was aware of DOS before women began speaking publicly, alleging the group was a sex cult.

Duncan Levin, an attorney for Bronfman, shared a statement with CNN shortly after her sentencing.

“Clare expected to be punished for what she pleaded guilty to, but her conduct merits a far lower sentence,” Levin said in the statement. “Despite press reports to the contrary, the court did find that Clare did not fund a sex cult. She intends to mount a vigorous and immediate appeal.”

Seth D. DuCharme, Acting United States Attorney for the Eastern District of New York announced the sentence in a press release. “Defendant Bronfman twisted our immigration system to serve a reprehensible agenda, and engaged in flagrant fraud to the detriment of her victims and in the service of a corrupt endeavor,” DuCharme said in a statement. “With today’s sentence, she has been held accountable for her crimes.”

The four other co-defendants in the case, who were high-ranking members of the organization, pleaded guilty last year to racketeering charges in connection with the case.

In a letter to US District Judge Nicholas Garaufis in August, Bronfman said she was not involved with DOS, where members claimed they were forced to give damaging confessions, nude photos and potentially embarrassing information as “collateral” to maintain their vow of secrecy to the group. Women recruited into the group were known as “slaves” and each had “masters,” prosecutors said. Some former members of the group testified at Raniere’s trial that they were directed to have sex with Raniere, send him nude photos, and were even branded with his initials on their pelvic areas.

“I did not and do not support anyone abusing or using violence towards anyone. I just tried to do what I thought was best to honor my role as a leader in NXIVM and a good friend,” Bronfman said in her letter.

Despite Raniere’s conviction, Bronfman said in her letter to the judge that she will not disavow Raniere or Nxivm.

“Many people, including most of my own family, believe I should disavow Keith and NXIVM, and that I have not is hard for them to understand or accept,” Bronfman wrote in her letter. “However, for me, NXIVM and Keith greatly changed my life for the better.”

Bronfman said in her letter that Raniere’s self-improvement teachings helped her overcome “patterns of self-loathing, insecurities, shame and fears” and that through Nxivm, she was able to find a community of friends that became like family to her.

Bronfman will be housed at the Metropolitan Detention Center in Brooklyn, the same facility where Raniere is housed. He is expected to be sentenced Oct. 27.