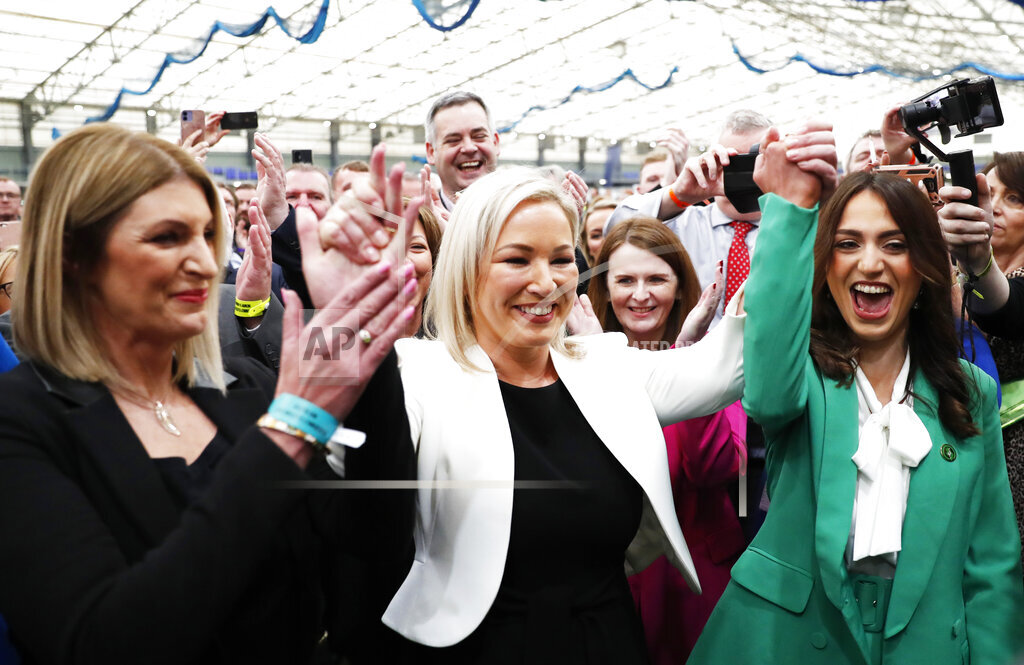 BELFAST, Northern Ireland (AP) — The Irish nationalist party Sinn Fein hailed a “new era” Saturday for Northern Ireland as it headed toward a historic election win that would make it the largest party in the legislature for the first time.

With the majority of the Assembly’s 90 seats counted, Sinn Fein, which seeks to unite the north with Ireland, is vying with the Democratic Unionist Party, which has dominated Northern Ireland’s legislature for two decades. So far both have 23 seats, but Sinn Fein was widely expected to win the most seats.

The centrist Alliance Party, which doesn’t identify as either nationalist or unionist, has seen a huge surge in support and is set to become the other big winner of this year’s local U.K. election, which was held Thursday. It has 17 seats so far.

Sinn Fein is poised to secure the right to the post of first minister in Belfast for the first time since Northern Ireland was formed as a Protestant-majority state in 1921.

It’s a milestone for a party long linked to the Irish Republican Army, a paramilitary group that used bombs and bullets to try to take Northern Ireland out of U.K. rule during decades of violence involving Irish republican militants, Protestant Loyalist paramilitaries and the U.K. army and police.

O’Neill stressed that it was imperative for Northern Ireland’s politicians to come together to form an Executive — the devolved government of Northern Ireland — next week. If none can be formed within six months, the administration will collapse, triggering a new election and more uncertainty.

There is “space in this state for everyone, all of us together,” O’Neill said. “There is an urgency to restore an Executive and start putting money back in people’s pockets, to start to fix the health service. The people can’t wait.”

While a Sinn Fein win would signal a historic shift that shows diminishing support for unionist parties, it’s far from clear what happens next because of Northern Ireland’s complicated power-sharing politics and ongoing tussles over post-Brexit arrangements.

Under a mandatory power-sharing system created by the 1998 peace agreement that ended decades of Catholic-Protestant conflict, the jobs of first minister and deputy first minister are split between the biggest unionist party and the largest nationalist one. Both posts must be filled for a government to function, but the Democratic Unionist Party has suggested it might not serve under a Sinn Fein first minister.

The DUP has also said it will refuse to join a new government unless there are major changes to post-Brexit border arrangements, known as the Northern Ireland Protocol.

Those post-Brexit rules, which took effect after Britain left the European Union, have imposed customs and border checks on some goods entering Northern Ireland from the rest of the U.K. The arrangement was designed to keep an open border between Northern Ireland and EU member Ireland, a key pillar of the peace process.

But it angered many unionists, who maintain that the new checks have created a barrier between Northern Ireland and the rest of the U.K. that undermines their British identity.

Saturday’s results bring Sinn Fein’s ultimate goal of a united Ireland a step closer, although Sinn Fein has kept unification out of the spotlight this year during a campaign dominated by the skyrocketing cost of living.

O’Neill has said, on Irish unification, there would be no constitutional change until voters decide on it. Sinn Fein leader Mary Lou McDonald indicated Friday that planning for any unity referendum could come within the next five years.

Polling expert John Curtice, a professor of political science at the University of Strathclyde, said Northern Ireland’s latest electoral results are a legacy of Brexit.

“The unionist vote has fragmented because of the divisions within the community over whether or not the Northern Ireland Protocol is something that can be amended satisfactorily or whether it needs to be scrapped,” he wrote on the BBC website.

Persuading the DUP to join a new government and trying to press the EU to agree to major changes in post-Brexit arrangements will pose a headache for British Prime Minister Boris Johnson, he added. Johnson’s own Conservative party lost at least 450 seats in Thursday’s local election.

The full results of Northern Ireland’s local election, which uses a system of proportional representation, were expected later Saturday.