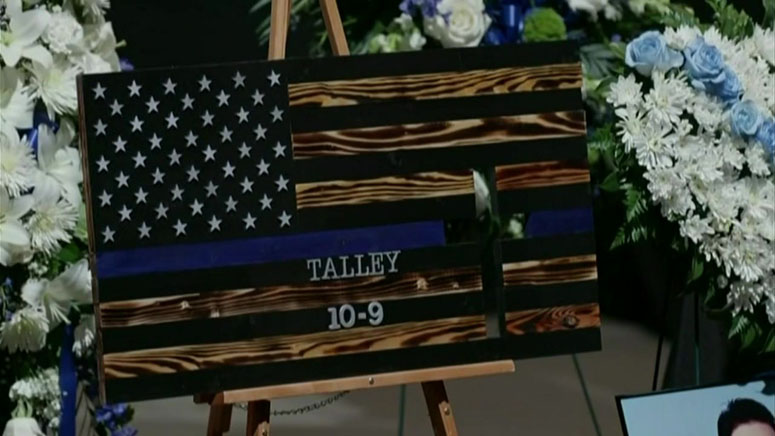 LAFAYETTE, Colo. (AP) — From helping someone with a flooded basement after a water main break to collecting memorabilia for a boy with cancer who wanted “police stuff” for Christmas, Officer Eric Talley was remembered Tuesday as a man of faith who put others first, long before he rushed into a Colorado supermarket where a gunman had opened fire.

Over 1,000 people, including relatives, community members and officers from as far away as New York City, honored the 51-year-old father of seven at a memorial service just over a week after he was credited with preventing more people from dying by hurrying into the store with other officers. Besides Talley, nine others were killed in the March 22 shooting in Boulder.

During the service at Flatirons Community Church in nearby Lafayette, Boulder Police Chief Maris Herold said Talley’s personnel file was filled with thank you letters from people he had helped during his decade with the department. A former information technology worker, Talley felt a calling to become an officer at age 41.

Since his death, behavioral health professionals have been calling to let the department know how grateful they were for Talley’s compassionate approach to those in trouble, she said. Herold also noted that he helped found the department’s drone unit, seeing the technology as an important advance that could help the public while protecting the safety of officers.

His supervisor, Sgt. Adrian Drelles, said Talley was enthusiastic about his life and the job, calling his boss so many times a day about what he was up to that Drelles had to limit him to 10 calls a day. He said the turnout at the service showed that Talley had character, which comes from the Greek word for leaving a mark.

“I would say he has left his mark, but not because of how he died but how he lived,” he said.

The Rev. Dan Nolan said a traditional Catholic requiem Mass celebrated in Latin on Monday was what Talley wanted for himself but that Tuesday’s service is what he would have wanted for fellow officers who also would have tried to get into the store as others tried to escape. He said seeing the honor shown to Talley should assure them that their sacrifices will not be taken for granted and should also serve as a reminder to everyone else that law enforcement is there to protect them.

“Love your officers, care for them, respect them, honor them. They are not here for themselves. They are here to lay down their lives for you if necessary,” said Nolan, adding that Talley’s faith is what motivated his response to the shooting.

The program for the ceremony included a poem written by Talley’s seven children for Christmas 2019, called “Our Unsung Hero.” It praises Talley for doing whatever they asked of him and risking his life. It ends with a line asking for his protection: “May God bless and protect you/And bring you home each day.”

Last week, officers arrived at the grocery store one minute and 40 seconds after being alerted to the shooting, police say. They said Talley led an initial team of officers inside within 30 seconds of arriving and that the gunman fired at them, killing Talley.

One of Alissa’s public defenders told a judge during his first court appearance that they needed to assess Alissa’s mental health but did not provide details about his condition.

His next court hearing will be May 25. His attorneys asked for at least two months before returning to court so they could evaluate him and review evidence gathered by investigators.