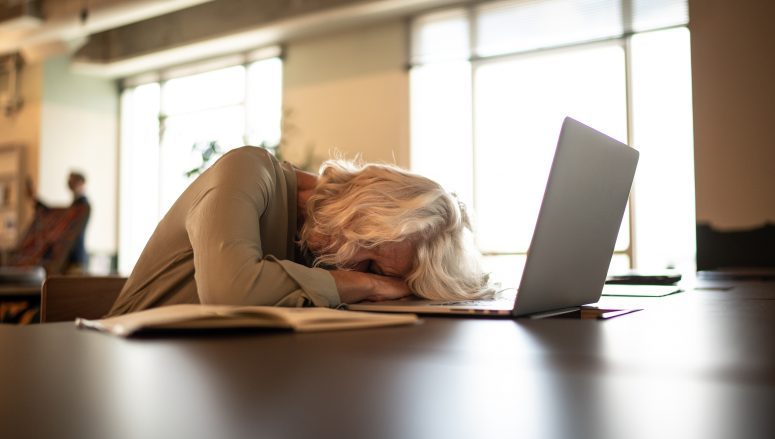 (CNN) — Calling all those who are sleep-deprived: We interrupt your yawns with an important announcement.

If you’re trying to get by on about six hours or less of sleep a night during the workweek, you’re setting up your brain for future failure, according to a new study published Tuesday in the journal Nature Communications.

After following nearly 8,000 people for 25 years, the study found a higher dementia risk with a “sleep duration of six hours or less at age 50 and 60” as compared to those who slept seven hours a night.

In addition, persistent short sleep duration between the ages of 50, 60 and 70 was also associated with a “30% increased dementia risk,” independent of “sociodemographic, behavioural, cardiometabolic, and mental health factors,” including depression, the study said.

“Sleep is important for normal brain function and is also thought to be important for clearing toxic proteins that build up in dementias from the brain,” said Tara Spires-Jones, who is deputy director of the Centre for Discovery Brain Sciences at The University of Edinburgh in Scotland, in a statement. Spires-Jones was not involved in the study.

“What’s the message for us all? Evidence of sleep disturbance can occur a long time before the onset of other clinical evidence of dementia,” said Tom Dening, who heads the Centre for Dementia at the Institute of Mental Health at the University of Nottingham in the UK, in a statement.

“However, this study cannot establish cause and effect,” said Denning, who was not involved in the study. “Maybe it is simply a very early sign of the dementia that is to come, but it’s also quite likely that poor sleep is not good for the brain and leaves it vulnerable to neurodegenerative conditions like Alzheimer’s disease.”

But does poor sleep lead to dementia — and which comes first? This “chicken and egg” question has been explored in prior studies, with research pointing both ways, according to neuroscientist Jeffrey Iliff, a professor of psychiatry and behavioral sciences at the University of Washington School of Medicine.

“In experimental studies, there does seem to be evidence of both chicken and egg,” Iliff told CNN in a prior interview. “You can drive it either direction.”

Some recent studies, however, have explored the damage sleep deprivation may cause.

People who get less REM, or dream-stage sleep, may be at higher risk for developing dementia, one 2017 study found. REM is the fifth stage of sleep, when the eyes move, the body heats up, breathing and pulse quicken and the mind dreams.

Healthy middle-aged adults who slept badly for just one night produced an abundance of beta amyloid plaques — one of the hallmarks of Alzheimer’s disease, another study published in 2017 revealed. Beta amyloid is a sticky protein compound that disrupts communication between brain cells, eventually killing the cells as it accumulates in the brain

A week of disrupted sleep increased the amount of tau, another protein responsible for the tangles associated with Alzheimer’s, frontal lobe dementia and Lewy body disease, the study found.

Yet another 2017 study compared dementia markers in spinal fluid against self-reported sleep problems, and found subjects who had sleep issues were more likely to show evidence of tau pathology, brain cell damage and inflammation, even when other factors like depression, body mass, cardiovascular disease and sleep medications were taken into account.

“Our findings align with the idea that worse sleep may contribute to the accumulation of Alzheimer’s-related proteins in the brain,” Barbara Bendlin of the Wisconsin Alzheimer’s Disease Research Center told CNN in a prior interview about the 2017 study.

“The fact that we can find these effects in people who are cognitively healthy and close to middle age suggest that these relationships appear early, perhaps providing a window of opportunity for intervention,” Bendlin said.

Because the new study followed a large population over an extended period of time, it adds “new information to the emerging picture” on the link between sleep deprivation and dementia, said Elizabeth Coulthard, an associate professor in dementia neurology at the University of Bristol in the UK, in a statement.

“This means that at least some of the people who went on to develop dementia probably did not already have it at the start of the study when their sleep was first assessed,” said Coulthard, who was not involved in the study.

“It strengthens the evidence that poor sleep in middle age could cause or worsen dementia in later life,” she said.

At this time, science has no “sure-fire way to prevent dementia,” but people can change certain behavior to reduce their risk, said Sara Imarisio, who heads strategic initiatives at Alzheimer’s Research UK, in a statement. Imarisio was not involved in the study.

“The best evidence suggests that not smoking, only drinking in moderation, staying mentally and physically active, eating a balanced diet, and keeping cholesterol and blood pressure levels in check can all help to keep our brains healthy as we age.”