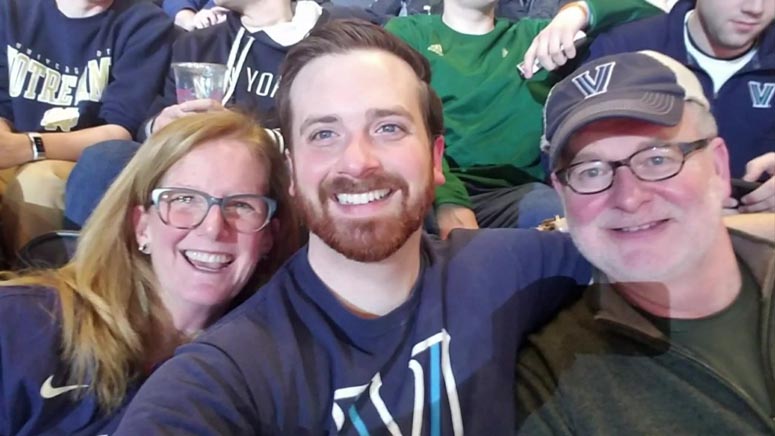 (WHDH) — Passion runs deep when it comes to cheering for your favorite college team, and Melissa Krosoczka’s family knows exactly who they’re favorite team is.

“We cheer for Villanova,” says the Paxton mother.

Melissa and her family are wild about the Wildcats, with two kids who graduated from the Pennsylvania school. Every March, they make a trip down to Madison Square Garden in New York City to watch Villanova play in the Big East basketball tournament.

“Got a hotel and spent the weekend,” says Melissa. “Fun restaurants and the games.”

The Krosoczka’s drive from their central Massachusetts to New York for a full weekend of basketball at the “other” Garden. This past February, she spent more than $500 on four tickets for the tournament’s semifinals and finals games.

“[I] found good seats this year for the three of us,” says Melissa of the trip with her husband and son. “We were pretty pumped.”

The second round of the tournament tipped off as scheduled on March 12, but at halftime, the game and the entire tournament were canceled because of COVID-19.

Melissa and her family were disappointed but understood the decision.

“Very [disappointed], very much so, but also cautious because of the possible exposure,” she says.

Since the tournament was canceled, Melissa thought she would get her $500 back. The ticket agency sent out an email saying everyone would receive a refund.

“We didn’t have to do anything,” Melissa says.

A few weeks later though, she received another email from the agency with a new policy. It would be offering credits to future events unless the ticket buyer responded within seven days specifically requesting a refund. On the seventh day, Melissa requested her money back.

“We didn’t hear anything and then we got another email,” she says. “That stated that we had responded too late.”

Despite more emails arguing that she had responded within the seven day window, the company refused to give Melissa her refund. Needing an assist, she passed the problem over to Solve It 7 for help.

Melissa forwarded us her emails. They clearly showed she replied with her refund request in time. When we gave that information to the ticket agency, a representative reviewed her case and agreed.

“They decided to refund our money,” she says.

“I really appreciate your prompt answers [and] your prompt response,” says Melissa. “And all the help you gave us.”