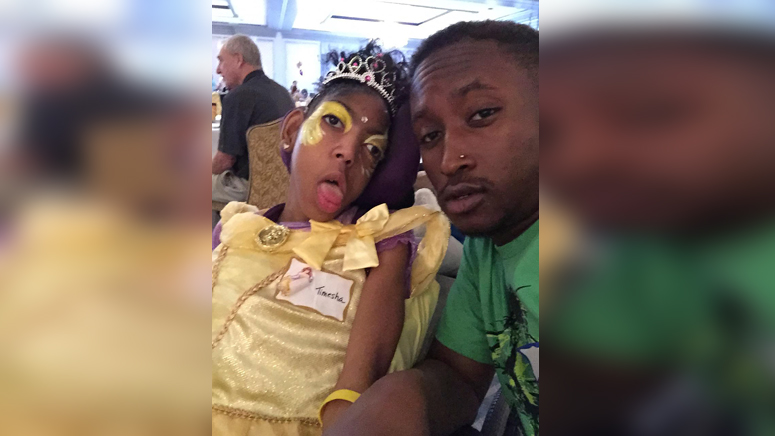 In this undated family photo provided by Erica Lattimore through Fieger Law shows her daughter, Timesha Beauchamp with her brother Steven Thompson in Southfield, Mich. An attorney for the family of a young woman found breathing at a Detroit funeral home after being declared dead says the 20-year-old was in a body bag for some two hours before it was opened and she was discovered to be alive. Geoffrey Fieger, who was hired by Timesha Beauchamp's family, said Tuesday, Aug. 25, 2020 the Southfield woman hospitalized in critical condition and is on a respirator. (Courtesy Erica Lattimore through Fieger Law via AP)

A suburban Detroit paramedic repeatedly failed to recognize that a young woman declared dead was alive and misled a doctor by phone about her condition, according to state authorities who offered more details about the strange case.

The incident was bizarre because a funeral home discovered Timesha Beauchamp was alive when she gasped while her body was being prepared on Aug. 23.

The latest details are in a state license suspension filed last week against Michael Storms, a Southfield firefighter and paramedic, who was part of a four-member team responding to the home of the 20-year-old woman.

The documents obtained by The Associated Press are significant because no other agency has publicly offered many details about what happened to Beauchamp, who has cerebral palsy. Her family called 911 because of what appeared to be serious breathing problems.

The Southfield fire chief said the incident still remains under investigation by the city. Johnny Menifee said he shares the family’s “anguish,” but he has also insisted that his paramedics followed proper procedures and found “no signs of life.”

Menifee told reporters last week that Beauchamp might be alive because of “Lazarus syndrome,” a reference to people who come back to life without assistance after attempts to resuscitate have failed.

But that doesn’t resemble what state regulators allege. According to the license suspension from the health department:

— Storms stopped resuscitation efforts six minutes before getting permission from a doctor who was contacted by phone. “At no point did (Storms) attempt to verify circulation or respiration” with a device such as a stethoscope.

“The vital signs and description depicted to the physician were inaccurate.”

— Minutes later, Storms went back into the home when family members said Beauchamp appeared to be breathing and had a pulse. He placed her on a monitor, which “clearly showed” electrical activity and revealed she “was not deceased.” Apparently no action was taken.

— Storms went inside again when relatives noticed signs of life. “Both times (Storms) failed to recognize the patient was still alive” and indicated that chest movement was normal due to her medication.

The state said Storms changed his report when it was uploaded a second time to an incident database the next day.

Beauchamp wasn’t taken to a hospital until Cole Funeral Home in Detroit called 911 hours later. Funeral home staff actually saw her chest moving earlier when they picked up the body at the Southfield home, the state said, but Beauchamp’s family said they were assured by the medical crew that she was dead.

An Oakland County agency that oversees local emergency medical services had access to Storms’ report and other information and shared its conclusions with the Michigan Division of EMS and Trauma.

Menifee told the AP that the state’s version of events is “very alarming and very concerning.” But at the same time, he said it’s “not how we understand what happened.”

“I am seeking the truth in what happened,” the fire chief said Wednesday night. “We’re looking at everything here. This is a terrible thing that’s happened. This is tragic.”

The state also has suspended the license of another firefighter/paramedic, Scott Rickard. A hearing scheduled for next week will likely be postponed.

A lawyer for the paramedics, T. Joseph Seward, said Storms and Rickard will be contesting the conclusions. He declined further comment.

Beauchamp, meanwhile, remains in critical condition at a hospital. The family’s attorney, Geoffrey Fieger, said only her brain stem is functioning.

“This appears be one of the worst cases of gross negligence that I’ve ever encountered,” Fieger said Thursday. “She wasn’t dying or near death. Had they got her to the hospital none of this would have happened.”