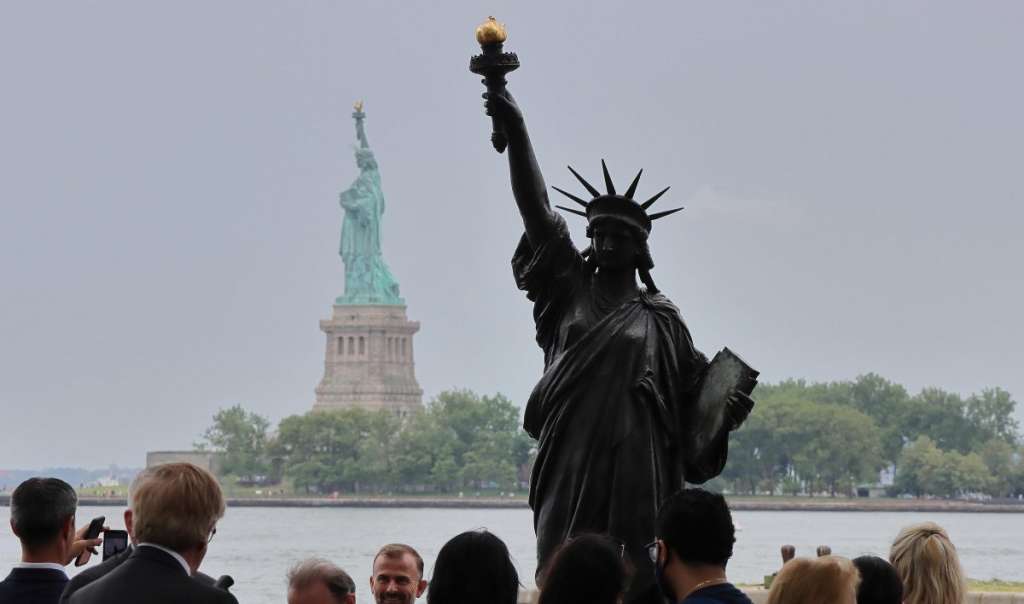 The "Little Sister" of the Statue of Liberty, a 9-foot-tall bronze statue, crafted from the original 1878 plaster model by Auguste Bartholdi stands in front of her while on display at Ellis Island on July 1 in New York City. Credit: Gary Hershorn/Corbis News/Getty Images

(CNN) — One hundred and thirty-five years after the Statue of Liberty was formally unveiled in New York Harbor, her “little sister” has taken up residence in front of the French ambassador’s home in Washington, DC.

The miniature Lady Liberty will be officially inaugurated in a ceremony with US Secretary of State Antony Blinken and French Foreign Minister Jean-Yves Le Drian on Wednesday, coinciding with France’s Bastille Day.

French Ambassador Philippe Etienne said, “it means a lot” to have the statute in the United States, calling it “a strong reminder … of the friendship between the French people and the American people.”

“It’s a reminder of the importance of this core value of liberty for the world,” he told CNN, noting that the formal title of the Statue of Liberty is “Liberty Enlightening the World.”

The “little sister” is an exact replica of the original but is one-sixteenth the size. It was crafted from sculptor Auguste Bartholdi’s 1878 plaster model and stood on display at the National Museum of Arts and Crafts in Paris for a decade before beginning its journey to the US.

In early June, the 1,000-pound, nine-foot tall statue was uninstalled from the museum and placed “in a custom-designed plexiglass container specifically for our ‘little sister,'” according to Ed Aldridge, the President of CMA CGM North America — the company that handled the shipping and logistics for the statue.

Aldridge told CNN they “took tremendous care and very detailed, thorough planning to make sure (they) did it right.”

“We trucked her very carefully to Le Havre, France, where we put her on board one of our CMA CGM ships and then took her to New Jersey and then trucked her to Ellis Island, and then eventually we trucked her down here to the Ambassador’s residence,” he said.

The statue was displayed near its world-famous “big sister” in New York City at the beginning of July, and Aldridge told CNN that they sped their ship up to get the statue across the Atlantic in time for Independence Day.

Following the dedication on France’s national day, the statue will remain at the ambassador’s residence in the US capital for 10 years.