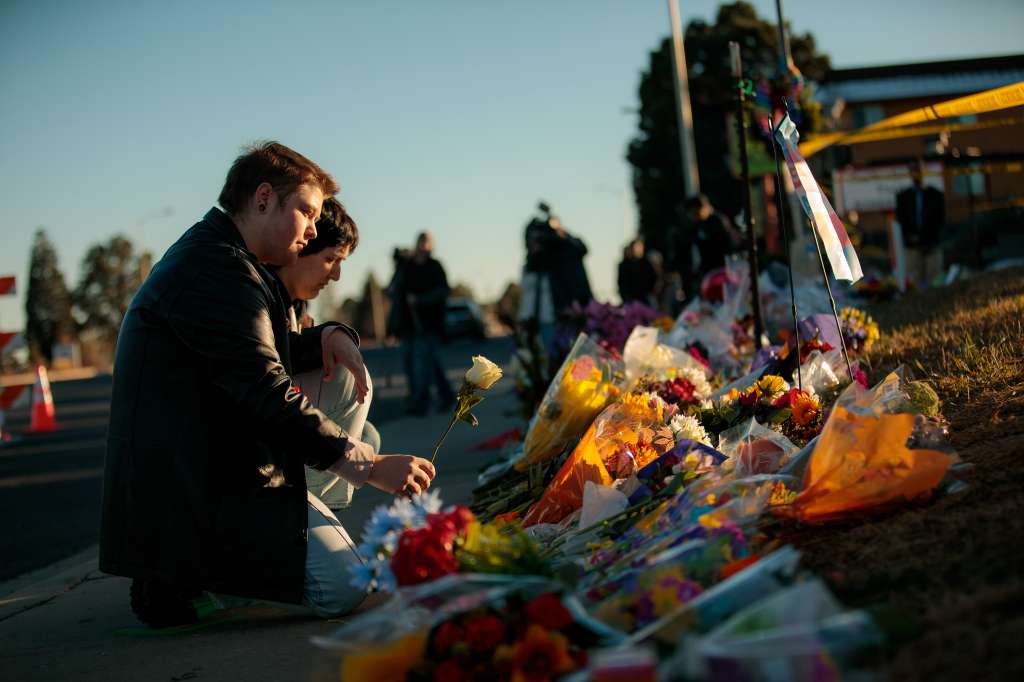 Ren Kurgis, left and Jessie Pacheco leave flowers at the growing memorial for victims of the Club Q shooting on November 20, in Colorado Springs, Colorado. Credit: Matthew Staver for the Washington Post/Getty Images

(CNN) — After allegedly killing five people and injuring more than a dozen others, the 22-year-old suspect in a mass shooting at an LGBTQ nightclub in Colorado Springs, Colorado, apologized to medical staff after being taken into custody, according to a court document unsealed Wednesday.

After the suspect was taken to a hospital for treatment, officers “overheard Anderson tell medical staff he was sorry and he had been awake for four days,” according to the partially redacted affidavit.

Aldrich allegedly entered the club, which was well-known to the LGBTQ community in Colorado Springs, with an AR-style weapon and a handgun and immediately began firing into the crowd.

The suspect was quickly tackled to the ground by two patrons, Richard Fierro and Thomas James, who disarmed and subdued Aldrich until police arrived.

The previously sealed probable cause affidavit details observations documented immediately after the shooting.

It provides some insight on moments both before and after the tragedy, which claimed the lives of Daniel Aston, Kelly Loving, Ashley Paugh, Derrick Rump and Raymond Green Vance. At least 19 others were injured, police have said, most of whom suffered gunshot wounds.

In the hours before the shooting, Aldrich — whose attorneys say identifies as nonbinary and uses they/them pronouns — was planning to see a movie at 10 p.m. with their mother, Laura Voepel, according to the affidavit, which cites a detective’s conversation with Voepel after the shooting.

But Aldrich left before the movie, telling Voepel they were going on an “errand” that would take 15 minutes, the affidavit states.

“Laura said she did not see Anderson when he left and did not know if he took anything with him. Laura stated Anderson took her phone with him and she had not seen him since,” according to the affidavit.

Voepel told the detective she and Aldrich “did not have weapons other than a folding pocket knife belonging to Anderson,” according to the affidavit.

The affidavit also contains two surveillance video screenshots from the night of the shooting, one showing a person police say is Aldrich exiting an SUV and another of that person firing upon entering the club. The SUV is registered to Aldrich, according to the court document.

“When Anderson exited the driver’s door of the vehicle, it was apparent that he was wearing a ballistic vest and was carrying an AR-15 style assault rifle. He entered the business and, after entering the business a short distance, he opened fire indiscriminately at patrons inside of the club,” the affidavit states.

When officers began arriving at the scene, they saw victims both inside and outside the club, according to the affidavit.

As police and rescuers rushed to the club to treat the wounded, officers initially mistakenly noted Aldrich “may have sustained a gunshot wound to the head.”

Aldrich “was transported to a local hospital to have injuries treated. Initial reports indicate that Anderson may have sustained a gunshot wound to the head. Anderson is suspected to survive his injuries,” the affidavit read.

The public defender’s office, which is representing Aldrich, has previously declined all requests for comment, citing office policy. He is being held without bond and has not yet entered a plea.

If Aldrich is convicted, the first-degree murder charges alone carry a sentence of up to life in prison without parole, Colorado’s Fourth Judicial District Attorney Michael Allen said during a news conference earlier this week.

“When you file 305 counts in a case, that tells the public, this community, this state and this nation that we are taking this case as serious as we possibly can,” Allen told reporters Tuesday. “Meaning that we are going to prosecute this case to the fullest extent of the law.”

Aldrich is next due in court on February 22 for a preliminary hearing.