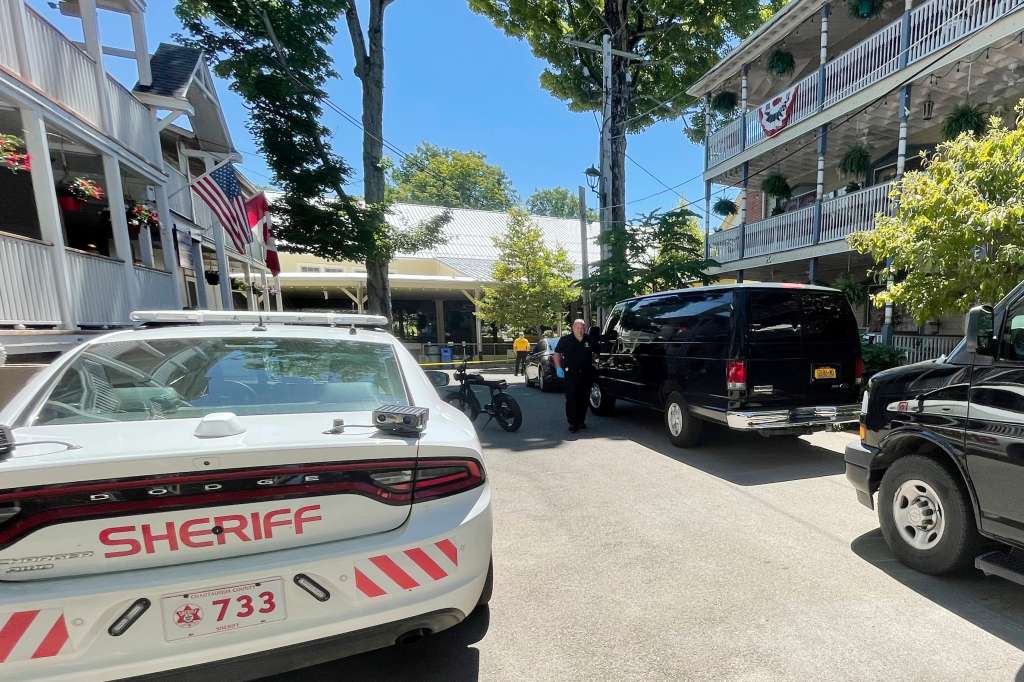 A police officer, center, carries out a bag from the amphitheater after author Salman Rushdie was attacked during a lecture, Friday, Aug. 12, 2022, at the Chautauqua Institution in Chautauqua, N.Y., about 75 miles (120 km) south of Buffalo. (AP Photo/Joshua Goodman)

Hadi Matar, 24, is accused of stabbing Rushdie — whose controversial work has triggered death threats — at a speaking engagement on Friday, authorities said. CNN has contacted a public defender assigned to Matar but did not receive an immediate response.

The State Police initially reported that Matar was arraigned and remanded without bail to the Chautauqua County Jail but later said he was being arraigned Saturday.

Rushdie, 75, was stabbed at least twice on stage at the Chautauqua Institution before he was slated to give a lecture, New York state police said Friday. He was airlifted to a hospital in northwestern Pennsylvania and underwent surgery, a Pennsylvania police official said.

Later in the day, Rushdie was put on a ventilator and was unable to speak, his agent, Andrew Wylie, told The New York Times. He will likely lose an eye, Wylie said. “The nerves in his arm were severed; and his liver was stabbed and damaged. The news is not good.”

A suspect was taken into custody shortly afterward, and authorities are working to determine the motive and the charges, state police said.

Following the attack, questions were raised about the security precautions — or lack thereof — at the host institution, which sits in a rural lake resort about 70 miles south of Buffalo, New York.

The institution’s leadership had rejected recommendations for basic security measures, including bag checks and metal detectors, fearing that would create a divide between speakers and the audience, according to two sources who spoke with CNN. The leadership also feared that it would change the culture at the institution, the sources said.

The two sources have direct knowledge of the security situation at the Chautauqua Institution and past recommendations and spoke to CNN on condition of anonymity because they were not authorized to speak publicly.

It’s unclear whether the recommended measures would have prevented the attack on Rushdie based on the information released about the incident as of Friday evening. Authorities have not disclosed the type of weapon that was used in the attack.

There were no security searches or metal detectors at the event, a person who witnessed the attack told CNN. The witness is not being identified because they expressed concerns for their personal safety.

CNN reached out to the Chautauqua Institution and its leadership for comment but did not receive a response Friday.

Institution president Michael Hill defended his organization’s security plans when asked during a news conference Friday whether there would be more precautions at future events.

“We assess for every event what we think the appropriate security level is, and this one was certainly one that we thought was important which is why we had a State Trooper and Sheriff presence there,” Hill said. “We will assess for each of the events at the Institution what we think the appropriate level of security is and that’s an ongoing process that we work in concert with local law enforcement on.”

Also injured Friday was Henry Reese, co-founder of the Pittsburgh nonprofit City of Asylum, who was scheduled to join Rushdie in a discussion, police said. He was taken to a hospital and treated for a facial injury and released.

The world reacts to attack on Salman Rushdie

Reese is on the advisory committee for press freedom group PEN America, which tweeted a message from him late Friday: “Salman Rushdie is one of the great authors of our time and one of the great defenders of freedom of speech and freedom of creative expression.”

Reese added, “We revere him and our paramount concern is for his life. The fact that this attack could occur in the United States is indicative of the threats to writers from many governments and from many individuals and organizations. In addition to wishing Salman well as Americans and citizens of the world, we need to re-commit ourselves to defending the values Salman has championed.”

Rushdie’s writings have garnered several literary prizes, including the Booker Prize for his 1981 book, Midnight’s Children. But it was his fourth novel “The Satanic Verses,” that drew the greatest scrutiny as some Muslims found the book to be sacrilegious, and its publication in 1988 sparked public demonstrations.

The late Iranian leader Ayatollah Ruhollah Khomeini, who described the book as an insult to Islam and Prophet Mohammed, issued a religious decree, or fatwa, calling for Rushdie’s death in 1989.

The attack occurred around 10:45 a.m. as Rushdie was being introduced, a witness told CNN. A man in a black shirt appeared to be “punching” the author. The witness, who was about 75 feet from the stage, did not hear the attacker say anything or see a weapon.

Another witness, Joyce Lussier, was sitting in the second row when she saw a man who “lurched across the stage and got right to Mr. Rushdie.

“He came in the left side and leapt across the stage and just lunged at him. In, I don’t know, two seconds he was across that stage,” Lussier said. She heard people screaming and crying and saw people from the audience rushing up to the stage, she said.

On Friday evening, police had blocked off the street to the New Jersey home believed connected to the suspect.

Iran’s bounty was never lifted
Rushdie, the son of a successful Muslim businessman in India, was educated in England, first at Rugby School and later at the University of Cambridge where he received a master’s degree in history.

After college, he began working as an advertising copywriter in London, before publishing his first novel, “Grimus” in 1975.

In 1989, as a result of the fatwa, Rushdie began a decade under British protection.

Rushdie told CNN in 1999 that the experience taught him “to value even more … intensely the things that I valued before, such as the art of literature and the freedom of expression and the right to say things that other people don’t like.

“It may have been an unpleasant decade, but it was the right fight, you know. It was fighting for the things that I most believe in against things I most dislike, which are bigotry and fanaticism and censorship.”

The bounty against Rushdie has never been lifted, though in 1998 the Iranian government sought to distance itself from the fatwa by pledging not to seek to carry it out.

In February 2017, on Khamenei’s official website, the supreme leader was asked if the “fatwa against Rushdie was still in effect,” to which Khamenei confirmed it was, saying, “The decree is as Imam Khomeini issued.”