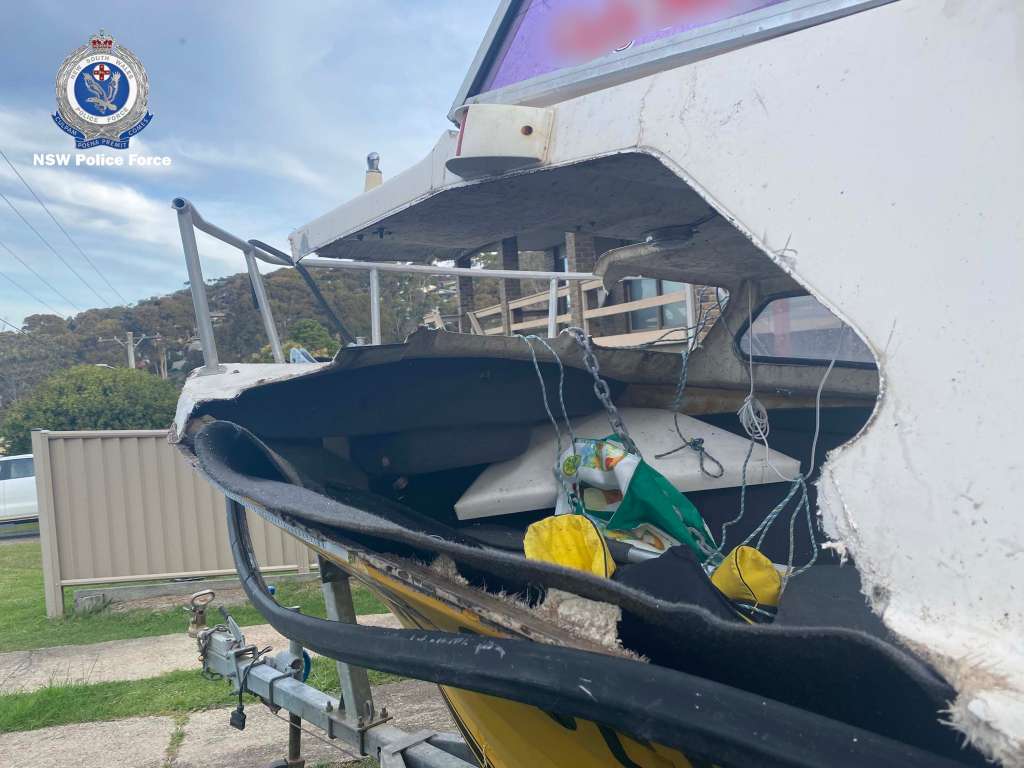 (CNN) — A teenager in Australia is in critical condition after a whale leaped from the water and landed on the fishing boat he was in.

Nick Myhill, aged 18, received severe head and neck injuries when the breaching whale fell onto the boat off the south coast of New South Wales (NSW) at the weekend.

Marine Rescue NSW received a mayday call on Sunday, following the incident off the coast of Narooma, about 200 miles south of Sydney.

According to a Facebook post by Marine Area Command — NSW Police Force, the “39-year-old male skipper advised that his 18-year-old male passenger had sustained a serious head injury.” The older man, Myhill’s stepfather, told rescuers he was trying to navigate back to the boat ramp despite the vessel taking on water.

Paramedics met the vessel and treated both men before transferring them to the hospital, according to the statement. Myhill was later airlifted to the capital, Canberra, where he remains in critical but stable condition. His step-father, named only as Matt, was treated in a local hospital for facial lacerations and concussion.

The pair, who live in Narooma, were on an early morning fishing trip, “doing what they love”, according to a fundraising page set up by Carmen Bartley, a friend of the family.

In a statement sent to CNN, the family said: “They had no warning, and no time to react. Both Nick and Matt were injured. Matt was able to quickly get them back to shore, using the VHF (very high frequency marine radio) to make a mayday call on the way, to organize an ambulance to meet them on arrival at the boat ramp. Matt’s actions no doubt saved Nick’s life.”

Myhill remains in a coma with severe head and neck injuries, the family said.

“The extent of these injuries, and long term implications is not known yet. Matt and Nick are seasoned fishermen, and this was an accident that could have happened to anyone,” the statement said.

The family thanked the medical professionals involved in the pair’s care and added: “Nick is a strong young man, and he is fighting hard.”

Authorities are now urging skippers to keep their distance from whales during the migration season.

Marine Area Commander Superintendent Joe McNulty said in the Facebook post: “The incident demonstrates the dangers these mammals can pose to those on the water.

“In recent days, the number of whales migrating north has dramatically increased, and maritime authorities have received reports they’re traveling closer to the coast than in previous years.

“Given the close proximity to the shoreline, there is potential for some spectacular whale watching, but we encourage anyone hoping to get a closer look to maintain a safe distance as outlined in the Biodiversity Conservation Regulation 2017.”

These laws make it illegal for anyone approaching a whale in a vessel to get closer than 100 meters (328 feet).

The whale may have been injured in the incident, according to the police statement, and the NSW National Parks and Wildlife Service (NPWS) is working with Organisation for the Rescue and Research of Cetaceans in Australia (ORRCA) to monitor it.

The whale’s species wasn’t identified in the police or family statements, but Lucy Babey, deputy director and head of science and conservation at ORCA, a UK-based charity protecting whales and dolphins, told CNN that around 40,000 humpbacks frequent Australian waters at this time of year as they migrate toward warmer waters for winter.

“Humpback whales are very acrobatic and are known for their breaching, which is why they are one of the best species for whale watching,” she said.

Fully grown, they measure around 55 feet long and can weigh 79,000 pounds in the case of males and a little less for females — depending on whether or not they are pregnant. They can travel up to 15.5 miles an hour, but are likely to coast at a more leisurely pace during migration, said Babey.

Breaching can be a form of communication, she explained, with the loud sound of their tails hitting the water alerting others to danger or food in the area. However, they can also breach when threatened.

“It can be its way of saying ‘don’t come any closer, I’m here’ or it may be scared and jumping out of the way. They also breach more frequently if they are traveling with young.

“It could also just have been unlucky — the whale happened to be breaching and didn’t know there was a vessel there.”