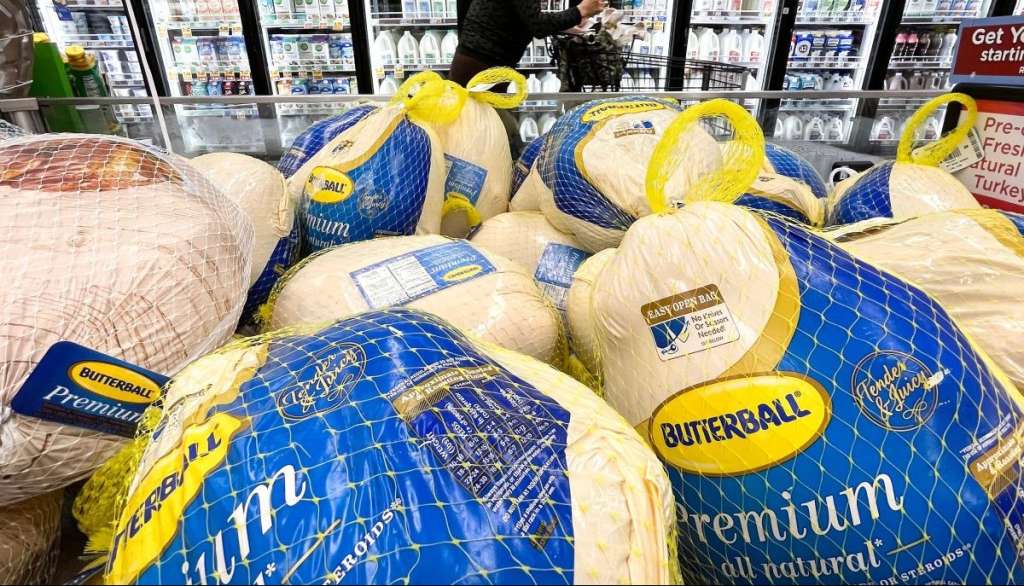 Thanksgiving dinner will cost 14% more this year, according to new survey by the American Farm Bureau Federation. Dinner for a family of 10 will cost on average $53.31 — up $6.41 from last year's average of $46.90 which was down 4% from 2019, the lowest in 10 years. A shopper walks past turkeys displayed for sale in a grocery store ahead of the Thanksgiving holiday on November 11, 2021 in Los Angeles, California. Credit: Mario Tama/Getty Images

Several factors led to this year’s increased pricing, including more Americans expected to cook at home as well as economic disruptions.

“These include dramatic disruptions to the US economy and supply chains over the last 20 months; inflationary pressure throughout the economy; difficulty in predicting demand during the COVID-19 pandemic and high global demand for food, particularly meat,” said Veronica Nigh, senior economist with the American Farm Bureau Federation.

The biggest ticket item — turkey — is up 24% since last year. But there are a few caveats. Grocery stores started advertising lower prices later than usual this year. For example, if you were shopping for a turkey during the week of November 5-11, you could have paid 18% more than the following week November 12-18, the American Farm Bureau found. That means shoppers can still find more affordable turkeys than the Farm Bureau’s estimate of $23.99 for a 16-pound bird.

“Taking turkey out of the basket of foods reveals a 6.6% price increase compared to last year, which tracks closely with the Consumer Price Index for food and general inflation across the economy,” Nigh said.

The entire Thanksgiving meal price includes other staples like stuffing, sweet potatoes, rolls with butter, peas, cranberries, a veggie tray, pumpkin pie with whipped cream, and coffee and milk — with enough for leftovers, according to the American Farm Bureau.

Turkey saw the sharpest increase in price, followed by paris of pie-crusts up 20% and dinner rolls up 15% at $3.05 for a dozen. Stuffing was the only item that fell in price — down 19% from the year prior to $2.29 for a 14-ounce bag of cubed stuffing mix, the survey revealed.

As for availability, US Secretary of Agriculture Tom Vilsack told CNN earlier this month: “There may be situations throughout the country where a particular grocery store may not have as many turkeys as necessary. At the end of the day, there’s going to be plenty of food on Thanksgiving plates for Americans.”

This is the 36th year the survey has been conducted using pricing data for the same menu items from all 50 states and Puerto Rico. Volunteer Farm Bureau shoppers also checked prices in person and online using grocery store apps and websites to find the best possible prices without using promotions or deals.