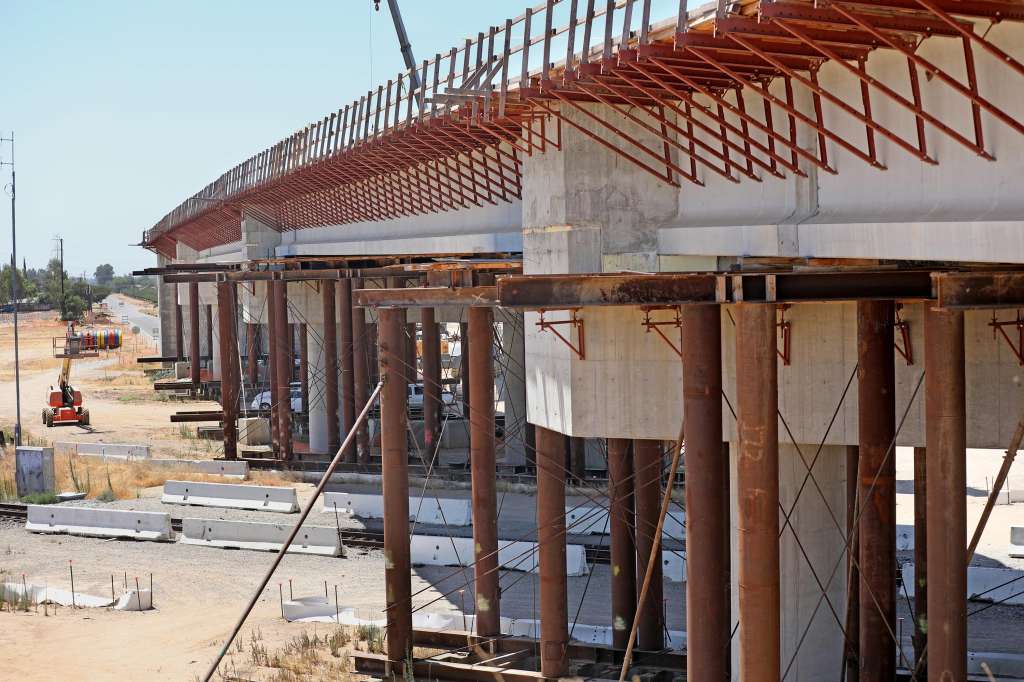 MADERA, CA - AUGUST 05: A 700 foot bullet train bridge across Road 27, between Road 27 and Club Dr., and the BNSF main line in Madera County had a serious problem with corroded tension strands that broke in December 2019, on Wednesday, Aug. 5, 2020 in Madera, CA. The California High-Speed Rail Authority is making repairs, though the incident points to seriously underlying problems in the project's management. After the strands (steel cables) broke, construction teams shored up the bridge with falsework. (Gary Coronado / Los Angeles Times via Getty Images)
CNN

(CNN) — With the money from his $1.9 trillion coronavirus relief law starting to flow, President Joe Biden is turning his attention to his next massive investment package — a two-part infrastructure and jobs proposal that could total $3 trillion.

The funding is sorely needed, experts say. From roads to public transit, from dams to airports, the nation’s infrastructure is falling apart.

The price tag to bring it into good repair? Nearly $2.6 trillion over 10 years, according to the American Society of Civil Engineers.

The US scored a C- in the society’s 2021 infrastructure report card, released earlier this month. It’s the first time that the nation received a grade higher than the D range since the survey began in 1998. Still, the funding gap is widening, up from the roughly $2.1 trillion estimated in the society’s 2017 survey.

He pointed to roads in poor condition, bridges that need repairs, flights that are delayed, water pipes that still contain lead and schools that lack adequate ventilation.

Infrastructure improvements have long enjoyed bipartisan support from lawmakers and presidents — though often with different priorities of what should get funding. Also, pumping money into the nation’s roads, bridges and other areas is also seen as a way to help lift the nation out of a recession since it creates jobs, both directly and indirectly.

A $2.1 trillion boost to public infrastructure spending over a decade could create 2.3 million jobs by 2024 and inject $5.7 trillion into the economy by 2029, according to an S&P Global report from last May.

The bump in economic activity may be somewhat smaller now since fiscal conditions have improved, but it still would be considerable, said Beth Ann Bovino, S&P Global’s chief US economist.

“Infrastructure pays for itself if it’s done wisely,” she said. “It’s the grease that keeps the economy moving along.”

Biden is expected to propose paying the infrastructure tab with a tax hike on businesses, including raising the corporate rate to 28%, up from the current 21%.

The highest grade, of B, went to the rail category, while the lowest was a D- for transit systems. Five areas improved from the 2017 report, including drinking water, energy and ports, while bridges slipped in its rating.

State and local governments have made progress in tackling the problems, the society said. Some 37 states have raised their gas tax to pay for transportation projects since 2010, and 98% of local infrastructure ballot initiatives passed last November. Plus, federal funding has increased for ports, drinking water and inland waterways.

Some areas in particular need of help: More than 40% of the nation’s roads are in poor or mediocre condition. Some 15% of wastewater treatment plants have reached or exceeded their design capacity. Among school districts that report data, just over half say they need to update or replace multiple building systems, including heating, air conditioning and ventilation.

State and local parks face $5.6 billion and $60 billion deferred maintenance backlogs, respectively. The number of deficient, high-hazard-potential dams is now estimated to exceed 2,300. And 7.5% of the nation’s bridges are considered structurally deficient.

The failure to act will cost American families $3,300 annually, on average, over the next 20 years, said Greg DiLoreto, past president of the society. This includes getting one’s car fixed after hitting a pothole or buying bottled water after a storm upends municipal systems.

“The bottom line is it affects your quality of life and our economic prosperity,” said DiLoreto, pointing to the recent water crisis in Jackson, Mississippi, and the hours truckers spend stuck in traffic on their way to and from ports. “You can see that every day.”