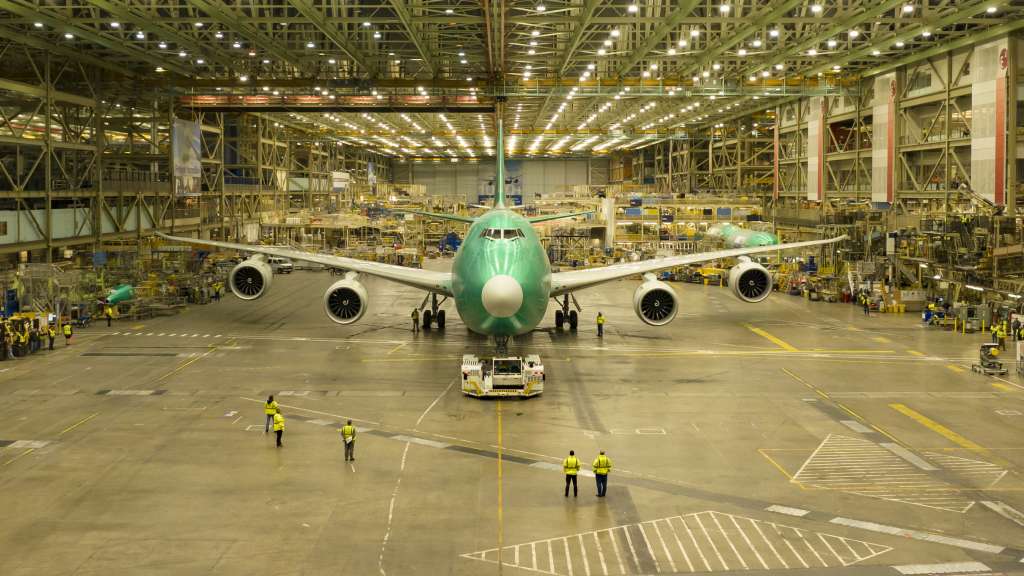 The last Boeing 747 left the company's widebody factory in advance of its delivery to Atlas Air in early 2023. Credit: Paul Weatherman/Boeing

(CNN) — After 53 years and more than 1,570 planes, the last Boeing 747 rolled off the assembly line in Washington state Tuesday evening, on its way to serve as a cargo plane.

The once-groundbreaking jumbo jet, with the distinctive second-floor bulge, is perhaps the most notable and popular plane Boeing has ever built. It was even big enough to be used to ferry the Space Shuttle from landing strips in California to its launch site in Florida. And it is set to launch a new type of spacecraft by Virgin Orbit as soon as next week, after carrying it aloft under its wing.

The 747 was once the choice of the rich and glamorous, and even royalty. Many movies, including the 1973 James Bond classic “Live and Let Die” featured the plane, or sets made to look like the first class lounge on its upper level. The 747 still serves as Air Force One, as it has since 1990. Two already-assembled planes are undergoing work right now to be transformed into the next generation of the presidential jet. Those planes won’t be delivered for at least four years due to delays.

Other than that use, the 747’s days as a passenger plane are now almost completely behind it. Airlines have moved away from planes with four fuel-guzzling engines like the 747. Rival Airbus dropped its own two-level jumbo jet, the A380, in 2019.

Boeing had signaled in 2020 that it would stop building the 747, even in its freighter form, as customers bought either the more fuel-efficient 777 freighter or saved money by reconditioning former 747 passenger jets as freighters. It has not yet announced plans for the factory in Everett, Washington, where it has been building the 747, but it does expect to keep it open. In order to build the massive plane the facility is 200 million cubic feet, which Boeing says makes it the world’s largest building by volume.

The passenger versions of the plane could carry between 400 to 500 passengers, at its maximum about twice as many passengers as one of Boeing’s current widebody jets, the 787-8 Dreamliner. But Boeing hasn’t built a passenger version of the 747 since it delivered the last one to Korean Airlines in 2017. This last 747 will go to Atlas Air Worldwide Holdings, which will operate the plane for Swiss logistics company Kuehne+Nagel. Tuesday’s final plane will be flown to another Boeing facility shop for painting and other final details, before being delivered to Atlas early next year.

Today there are only 44 passenger versions of the 747 still in service, according to aviation analytics firm Cirium. More than half of those — 25 — are flown by Lufthansa.

That total is down from more than 130 in service as passenger jets at the end of 2019, just before the pandemic crippled demand for air travel, especially on international routes on which the 747 and other widebody jets were primarily used. Most of those passenger versions of the jets were grounded during the early months of the pandemic and never returned to service.

But there are still 314 747 freighters in use, according to Cirium, many of which were initially used as passenger jets before being renovated into freighters.

“The 747-8 is an incredibly capable aircraft, with capacity that is unmatched by any other freighter in production,” said UPS in 2020, when Boeing signaled it would soon stop building the jet. “With a maximum payload of 307,000 lbs., we use them on long, high-volume routes, connecting Asia, North America, Europe and the Middle East.”

The current version of the 747 is 250 feet and 2 inches long, the longest commercial plane now in service, or about twice the length of the Wright Brothers’ first flight. It has a wingspan of 224 feet and 5 inches.

Boeing delivered the first 747 passenger jets in December 1969 to two airlines that no longer exist — TWA and Pan Am. Delta Air Lines was the last US airline to fly a passenger version of the plane, also in 2017. That was the last year the final US 747 passenger flights — by both Delta and United — drew large crowds of the plane’s fans, a testament to its enduring popularity.