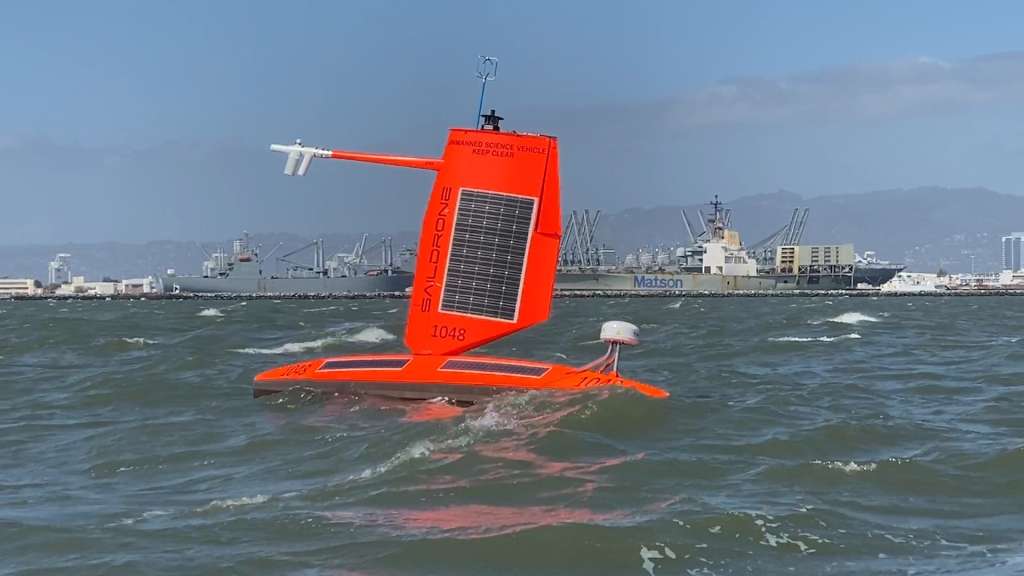 (CNN) — The brightly-colored robotic boats made by Saildrone seem to have a death wish.

Saildrone makes autonomous ocean vessels to study the environment. This summer, the Silicon Valley startup sent five of its vessels directly into the path of hurricanes in the Atlantic Ocean. While airplanes can fly through hurricanes, the screaming winds kick up such huge waves that attempting to sail boats right into them is something best to be avoided.

Saildrone’s vessels are uncrewed, and built to survive hurricane winds and huge waves. Scientists are excited that the vessels could improve our understanding of how storms intensify.

“If you’re in the center of a hurricane at those type of wind speeds, the ocean is just this big, frothy mess right there where the water begins and the air ends,” National Oceanic and Atmospheric Administration director of engineering Chris Meinig told CNN Business. “I cannot imagine purposely flying a plane or a ship into a hurricane. I’d much rather send these robots in there and have them do their work.”

Saildrone has a partnership with NOAA to study how hurricanes form, including their rapid intensification. Hurricane Ida, which struck the Gulf Coast before traveling to the Northeast recently, grew from a Category 1 to Category 4 storm in less than 24 hours.

Saildrone’s vessels are 23-feet long and have four cameras on them. They measure wind as well as the temperature of the ocean and the air.

Saildrone CEO Richard Jenkins told CNN Business that they’re focusing their attention on the spray and foam on the water during a hurricane. They want to understand how energy and heat are exchanged between the ocean and atmosphere. Data is streamed back to Saildrone’s Alameda, California, offices in real time, he said.

“No one’s ever observed what happens to waves of froth to spray in the center of hurricane. So we’re hoping that we can see with the camera what the water looks like,” Jenkins said.

Saildrone told CNN Business that all five of its vessels have survived the hurricane season thus far. The drones are in the Atlantic Ocean, so weren’t in the path of Hurricane Ida in the Gulf of Mexico, which killed at least 78 people across Louisiana and the Northeast recently, but Saildrone said it also plans to study storms in the Pacific Ocean.

Saildrone and NOAA have previously studied oceanic conditions near Alaska. Saildrone told CNN Business that it’s sailed over 500,000 miles to date, and claims that in 2019 it became the first uncrewed vehicle to circumnavigate Antarctica.

Saildrone’s other customers include NASA, the US Coast Guard, the Department of Defense as well as universities. Saildrone has made about 100 vessels and plans to make more, including larger vehicles.

Jenkins said that concerns about the climate motive his team.

“The oceans are really driving our global weather and climate,” Jenkins said. “Understanding the rate of change is going to really give us deep insights into our future and how we might need to change things.”