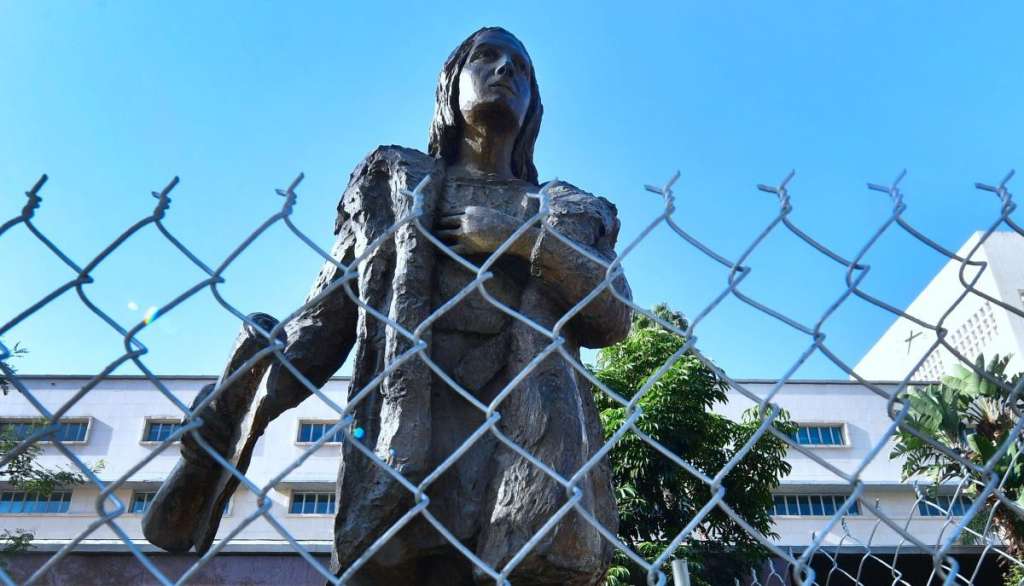 A number of states have moved to officially observe Indigenous Peoples' Day, or some version of it, instead -- a holiday to recognize the native populations that were displaced and decimated after Christopher Columbus and other European explorers reached the continent. A statue of Christopher Columbus is shown here at a downtown Los Angeles park is surrounded by a chain-link fence on October 9, 2017 in Los Angeles, California. Credit: AFP Contributor/AFP/AFP/Getty Images

(CNN) — Columbus Day has been a political lightning rod for states, cities and municipalities around the US for years now. Some have decided to do something about it.

A number of states have moved to officially observe Indigenous Peoples’ Day, or some version of it, instead — a holiday to recognize the native populations that were displaced and decimated after Christopher Columbus and other European explorers reached the continent.

Most prominently, President Joe Biden became the first US president to issue a proclamation commemorating Indigenous Peoples’ Day, writing that Monday was a day on which the country “celebrates the invaluable contributions and resilience of Indigenous peoples, recognizes their inherent sovereignty, and commits to honoring the Federal Government’s trust and treaty obligations to Tribal Nations.”

Columbus Day is technically a federal holiday, which means it is recognized by the US government and thus brings the closure of non-essential government offices, and, usually, places like post offices and banks.

But states and local governments can choose not to observe a federal holiday. And, as is the case with a growing number of cities and states, they can change the name and intent of the October holiday altogether.

As many as 130 cities across the country have ditched Columbus Day for Indigenous Peoples Day — and the list grows yearly.

Alaska: Observes Indigenous Peoples’ Day as of 2017. Gov. Bill Walker signed observances of the holiday in 2015 and 2016 before making the switch official in 2017.

Hawaii: Observes Discoverers’ Day in place of Columbus Day, with state law describing it as a day “in recognition of the Polynesian discoverers of the Hawaiian Islands.”

Maine: Observes Indigenous Peoples’ Day as of 2019, when Gov. Janet Mills said it was a step “in healing the divisions of the past, in fostering inclusiveness” and “in telling a fuller, deeper history.”

Nebraska: Beginning in 2021, the state will recognize Indigenous Peoples’ Day in addition to Columbus Day.

New Mexico: Observes Indigenous Peoples’ Day as of 2019. Gov. Michelle Lujan Grisham said the day would celebrate the state’s “23 sovereign indigenous nations and the essential place of honor native citizens hold in the fabric of our great state.”

Oklahoma: In 2019, the state voted to move Native American Day to the same day as Columbus Day so the two could be celebrated concurrently.

Oregon: Passed a law in 2021 designating the second Monday in October as Indigenous Peoples’ Day.

Vermont: A law was passed in 2019 replacing Columbus Day with Indigenous Peoples’ Day.

States and DC that have observed Indigenous Peoples Day via proclamations

Michigan: On October 14, 2019, Gov. Gretchen Whitmer declared the day to be Indigenous Peoples’ Day “to uplift our country’s indigenous roots, history, and contributions.”

Minnesota: In 2019, Gov. Tim Walz signed a proclamation declaring the second Monday in October that year as Indigenous Peoples’ Day. The state is home to 11 tribal nations.

Nevada: Gov. Steve Sisolak signed a proclamation in 2020 marking October 12 that year as Indigenous Peoples’ Day, saying, in part, that it “allows us to rethink our history” and recognize “the important contributions of Indigenous People in the State of Nevada.”

Virginia: In 2020, Gov. Ralph Northam declared Monday the first Indigenous Peoples’ Day in Virginia, calling it an “important step in creating an inclusive, honest Commonwealth.” The state is home to 11 native tribes.

Washington, DC: The DC Council voted to replace Columbus Day with Indigenous Peoples’ Day a few days before the 2019 observance.