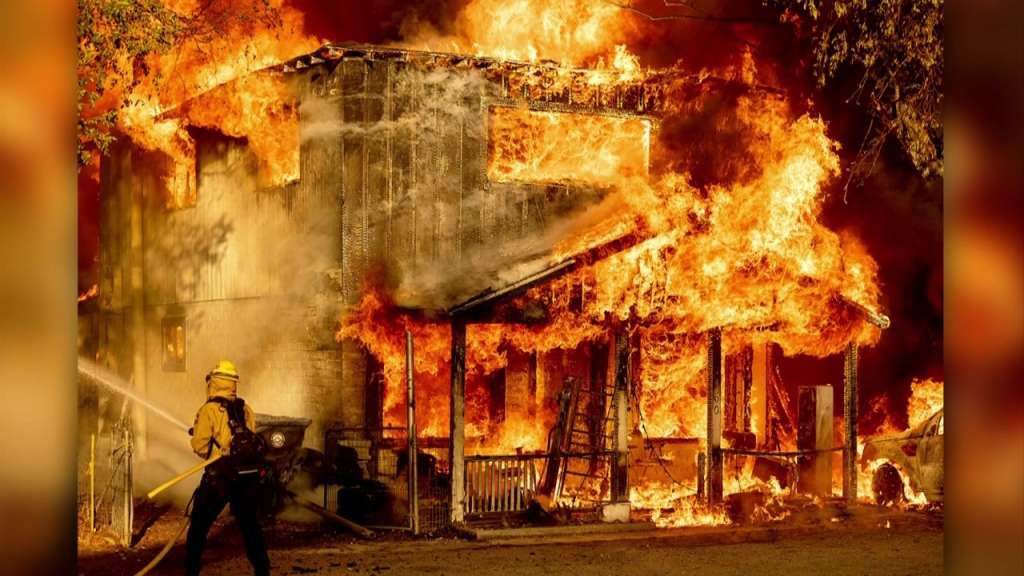 (CNN) — A small town in Northern California has been ravaged by a wildfire for the second time in less than a year.

Residents of Doyle, a town of about 700 residents north of Reno, are evacuating from their homes again as extreme drought and heat waves leave the area primed for wildfires.

California’s largest wildfire on record this year, the Beckwourth Complex Fire, whipped through Doyle on Saturday, destroying 33 homes according to the local fire department.

Just eight months ago, Doyle suffered extensive damage when a wind-driven wildfire destroyed 21 homes and 19 other structures in November, according to the Bureau of Land Management.

Many residents forced to flee their homes have been staying with friends and family or in shelters while evacuation orders remain in place, Catron said.

The Beckwourth Complex Fire, which was sparked on June 30, is not expected to be fully contained until July 30, according to the US Forest Service. As of Tuesday night, the lightning-sparked fire had scorched 92,988 acres and was 66% contained.

The Beckwourth Complex Fire is just one of many fires burning in the region.

California, along with much of the West, has been experiencing severe drought conditions compounded by record-breaking extreme heat waves that have swept across the region.

In turn, wildfires have been so widespread that California has already seen more than three times as much land burned this year than during the same time period last year, officials said.

In 2020, California recorded its worst fire season, with around 4.1 million estimated acres burned, according to the National Interagency Fire Center.

“While wildfires are a natural part of California’s landscape, the fire season in California and across the West is starting earlier and ending later each year,” Cal Fire said. “Climate change is considered a key driver of this trend.”

The US Forest Service, which is leading the battle against the Beckwourth Complex Fire, said it couldn’t confirm the number of structures lost in Doyle because it’s still too dangerous for a damage assessment team to enter.

Kimberly Kaschalk, a spokeswoman with the US Forest Service, said unusually dry conditions and numerous lightning strikes in the area were a factor in the fire’s growth.

CNN Meteorologist Michael Guy said Doyle’s location on the eastern flank of the Sierra Nevadas leaves it open to downslope winds from the mountains, meaning gusty winds are common. The wind combined with arid conditions is fueling flames. Winds in the area will be picking up Wednesday afternoon and last through Thursday night with gusts up to 25 mph, Guy said, noting it could hamper firefighting efforts.

Kaschalk told CNN officials are doing everything they can to keep residents and firefighters safe. There have been no reported deaths from the Beckwourth Complex fire and only a few minor injuries as of Tuesday.

“I’m sure it’s frustrating for everyone,” Kaschalk said.

Vicky Anderson, an employee at Goodwin’s General Store in the nearby town of Chilcoot, told CNN the wildfires will “affect us tremendously the rest of the summer and for years to come.”

Anderson said flames from the Beckwourth Complex Fire had surrounded Frenchman Lake, a popular reservoir in the area, and she feared it would impact tourism.

“My heartfelt thoughts to all who have lost their homes,” he said in a statement. “This is both tragic and devastating.”