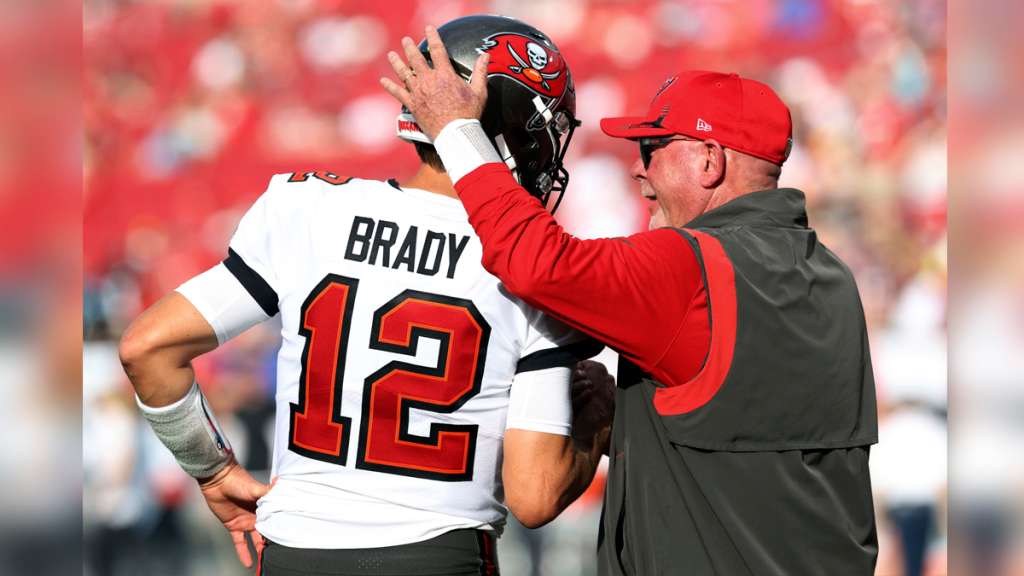 FILE - Tampa Bay Buccaneers coach Bruce Arians talks to quarterback Tom Brady before the team's NFL football game against the Carolina Panthers on Jan. 9, 2022, in Tampa, Fla. Arians has decided to retire as coach of the Buccaneers and move into a front-office role with the team, it was announced Wednesday night, March 30. Arians, who will turn 70 this coming season, coached the Bucs to the Super Bowl title in the 2020 season  Tom Bradys first with Tampa Bay. (AP Photo/Mark LoMoglio, File)

TAMPA, Fla. (AP) — Tom Brady was excused from training camp on Thursday, the first day of what Tampa Bay Buccaneers coach Todd Bowles said was a planned, 11-day absence from the team to address “personal things.”

Bowles said the 45-year-old quarterback’s break from practice was arranged before camp began, adding that Brady won’t return until after the Bucs’ preseason game at Tennessee on Aug. 20.

“Tom has been excused today. … He’s going to deal with some personal things. This is something we talked about before training camp started. We allotted this time because he wanted to get in and get chemistry with the guys with two weeks of training camp, knowing he wasn’t going to play the first two (preseason) games,” Bowles said after the Bucs concluded two days of controlled scrimmages against the Miami Dolphins.

Tampa Bay opens the preseason Saturday night against the Dolphins. The Bucs will also travel to Nashville for two days of practice ahead of their game against the Titans.

“He didn’t want to take away reps from Blaine, Kyle, as well as Griff, as far as going into these next two games. That’s something he can handle,” Bowles said. “We trust him. We talked about it. It was scheduled way before training camp.”

Brady, who retired in February only to change his mind six weeks later, was also excused from practice for personal reasons last Friday — two days after getting a scheduled day off for his 45th birthday.

Bowles said his confidence level is “pretty high” that Brady will be in the lineup for next month’s regular-season opener at Dallas.

“Per our conversation, I’m not worried,” Bowles said.