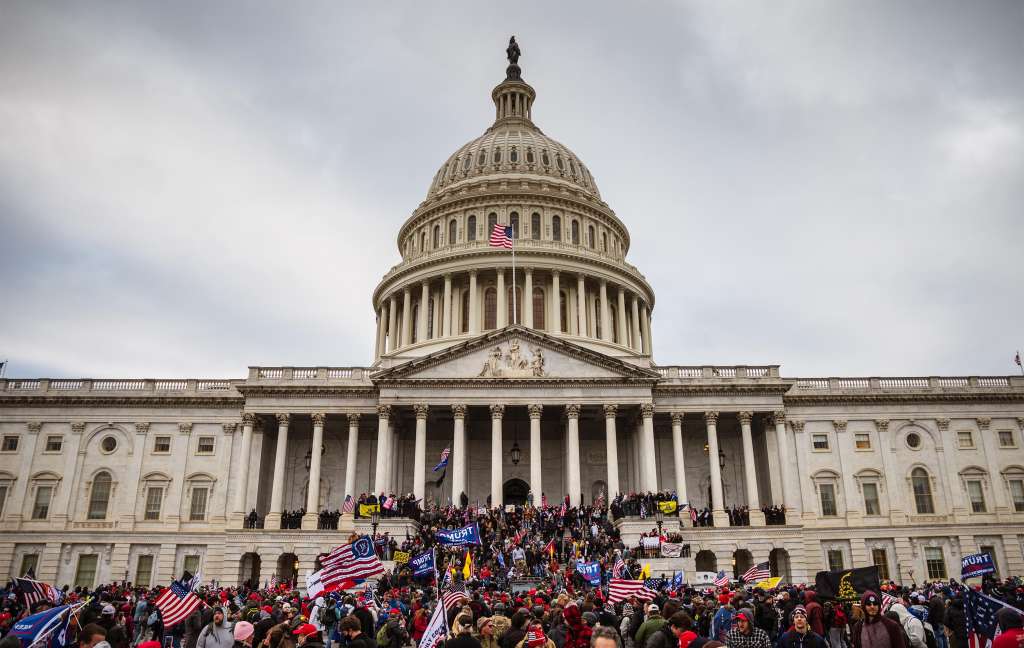 A large group of rioters stand on the East steps of the Capitol Building after storming its grounds on January 6, 2021 in Washington, DC. Credit: Jon Cherry/Getty Images

(CNN) — A top member of the Oath Keepers said in court on Wednesday that he overheard the leader of the group, Stewart Rhodes, trying and failing to get in touch with then-President Donald Trump after the January 6, 2021, attack on the US Capitol.

William Todd Wilson, a leader of the North Carolina chapter of the Oath Keepers, said Rhodes made a call on speakerphone to an unidentified person, according to court filings.

“Wilson heard Rhodes repeatedly implore the individual to tell President Trump to call upon groups like the Oath Keepers to forcibly oppose the transfer of power. This individual denied Rhodes’s request to speak directly with President Trump,” Wilson said as part of his plea.

The phone call happened when Rhodes and others were in a private suite at a Washington, DC, hotel on January 6 after the attack, according to Wilson’s court proceeding. The person declined and would not connect Rhodes with Trump.

“After the call ended, Rhodes stated to the group, ‘I just want to fight,'” the filing said.

Rhodes has pleaded not guilty, and two lawyers for Rhodes said on Wednesday said they were not aware of any time Rhodes had direct contact with Trump, and had not heard about the call before.

Wilson pleaded guilty on Wednesday to seditious conspiracy, the third person to admit to trying to overthrow the Biden presidency, as well as obstruction. He will cooperate with prosecutors in their escalating investigation into the events of January 6.

Wilson, a 44-year-old military veteran, was not previously charged before the Justice Department announced his plea deal, making his hearing before a judge in DC District Court a surprise.

At his plea hearing, Wilson said he had heard Rhodes discuss using even lethal violence to stop the congressional certification of the presidential vote.

Wilson also said he contributed firearms to the so-called “quick reaction force” planned by the group that was set up in an Arlington, Virginia, hotel. Prosecutors allege that effort was so that members of the Oath Keepers could rush to the Capitol if called on by Rhodes.

Separately, Wilson attended a crucial online meeting for the Oath Keepers in November 2020, where Rhodes allegedly outlined plans to block the Biden presidency and urged others to take part, according to court records.

According to court documents, Wilson stored an AR-15, a 9-millimeter pistol, and approximately 200 rounds of ammunition in his hotel room, which Rhodes paid for.

After the riot, Wilson threw his phone into the Atlantic Ocean in an attempt to evade law enforcement investigation, according to his plea agreement.

Rhodes and other members of the group are accused of allegedly recruiting members, stocking up on weapons and organizing to disrupt Congress’ certification of the 2020 election. Prosecutors say some of the Oath Keepers also continued to plot “to oppose by force the lawful transfer of presidential power” after the Capitol riot.

Lawyers for Rhodes on Wednesday downplayed the facts of the case against Rhodes and the significance of Oath Keeper plea deals.

“None of them still show evidence of an actual plan to do something,” Phillip Linder said about the case against the Oath Keepers.

“Clearly they felt it was in their best interest to do that, whether they had a case or not,” Rhodes’ other attorney, James Lee Bright, told CNN. “We’re certainly never going to encourage Stewart to do so (plead).”

Judge releases alleged leader of QRF
An Arizona man accused of helping run an armed team of Oath Keepers outside Washington on January 6, 2021 will be released from jail while he awaits trial, a federal judge ruled on Wednesday.

Judge Amit Mehta’s decision overturns an earlier ruling by a judge in Arizona that Edward Vallejo, a 63-year-old alleged member group, might obstruct justice and is too dangerous to be released.

While Mehta ruled that prosecutors did not meet the legal standard to keep Vallejo in jail, “the seriousness of this cannot be understated,” adding that the charges against Vallejo strike at “the very heart of our democracy.”

“This is not a charge without strong evidentiary basis, and anyone who suggests otherwise is not paying attention,” Mehta said. “The seditious conspiracy charge is well-founded, it is based on real words. Not just on someone’s political beliefs.”

But, Mehta said, Vallejo was more of a “foot soldier” in the conspiracy as opposed to a leader and did not break the law again in between the riot and when he was indicted.

Vallejo will be released on strict home detention, and will not be allowed to access to internet, his passport, or any weapons.

Prosecutors were successful in their initial bid to keep Vallejo in jail after his arrest in January, alleging that Vallejo drove across the country to act as a point person for the so-called quick reaction force (QRF) in a Virginia hotel.

Prosecutors also claimed that Vallejo excitedly awaited instruction from Rhodes while the riot unfolded, and cited a podcast interview where Vallejo spoke about the possibility of “armed conflict” and “guerilla war.” After January 6, Vallejo said he was still in DC “waiting for orders from Steward Rhodes,” according to messages highlighted by prosecutors, and told Rhodes that “[i]f you ever need me for ANYTHING I am on call and am at your service, Sir!”

On the night before the original bail hearing in Arizona, a friend told Vallejo — during a recorded jail call — about video evidence prosecutors planned to use against him. In the call, cited by prosecutors in court documents, the friend said, “They have security camera footage of you with a dolly with two of the black bins with yellow lids.” Later that same day, Vallejo asked his wife in another recorded call from jail to “go through everything” in their house for “anything that is going to jeopardize” his release, telling her specifically to look in “my satchel in the black container with the yellow top” — a hint that prosecutors say may have been an attempt to obstruct their investigation.

Defense attorneys denied that Vallejo was trying to obstruct the investigation, saying that it had been a year since the riot and the bins likely did not have the same contents.

Vallejo’s attorney, Matthew Peed, also argued that Vallejo was not an official member of the Oath Keepers and took no part in their planning for January 6, citing hundreds of pages of encrypted messages from an Oath Keepers Signal chat.

Instead of awaiting instruction at the QRF during the riot, Peed said, Vallejo was wandering DC searching for his truck because he had forgotten where he parked the night before.

“You have no reason to celebrate this afternoon,” Mehta said. “I know you are happy to be released, but you are in a very precarious condition.”