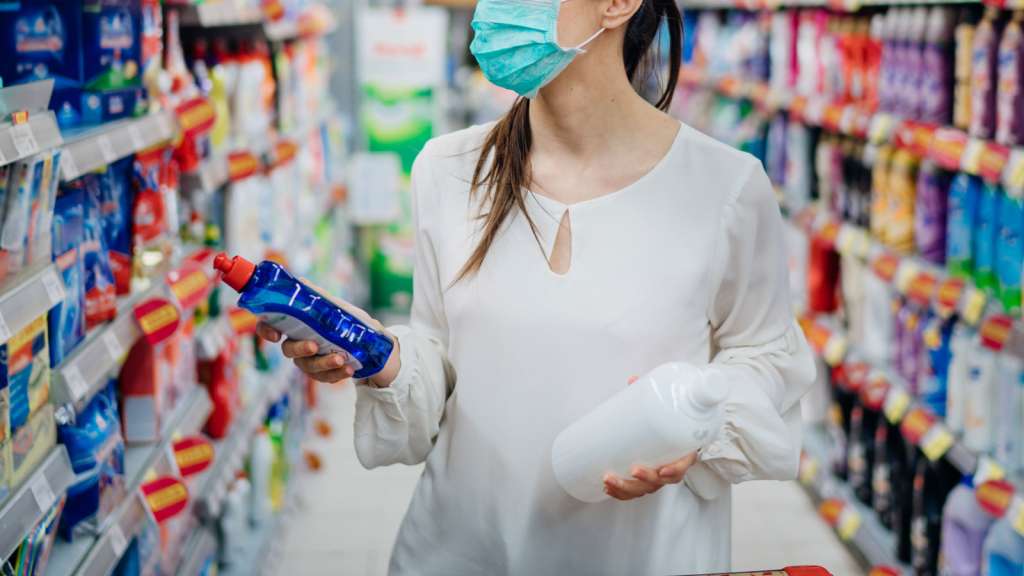 Starbucks, Subway and Burger King are among retailers earning an F in the 2021 Toxic Hall of Fame. (Photo: Shutterstock)
CNN

(CNN) — A dozen major companies earned an F for failing to publicly address the growing problem of toxic chemicals that may be in the products they sell to consumers, according to the 2021 Who’s Minding the Store? A Report Card on Retailer Actions to Eliminate Toxic Chemicals.

The report is a collaboration of nonprofit partner organizations, including the environmental advocacy groups Toxic-Free Future, WE ACT for Environmental Justice and Defend Our Health.

Rounding out the list are 99 Cents Only Stores; Sobeys and Metro, which are the second and third largest food retailers in Canada; and Alimentation Couche-Tard, which operates Circle K and Couche-Tard convenience stores in the US, Canada and more than a dozen other countries worldwide.

“All a company has to do to break out of an F is to get more than 15 points, and companies can earn up to 164 possible points. For example, Nordstrom earned 13 points while Target earned 105 points,” Schade said.

All but two of the retailers in the so-called Toxic Hall of Shame “are repeat offenders. They deserve special dishonorable mention for having earned an F grade across multiple years of grading,” the report stated.

Four of the companies failed to score a single point for public actions to adopt safer chemical policies, the report card said. Those companies were the 99 Cents Only Stores, Publix, Metro and Sally Beauty.

“There may be cases where companies are not publicly disclosing progress, which is why we send them their draft scores in advance to give them an opportunity to respond to our findings and be more transparent,” Schade said.

“This year we gave companies about two months to review and respond to their draft scores. We reached out to every retailer multiple times. We also delayed the grading process given the pandemic, to give companies additional time this year to make progress,” he added.

“There is really no excuse for these retail laggards to earn a failing grade,” said report coauthor and Defend Our Health executive director Mike Belliveau in a statement.

“Retailers that are not properly managing chemical risks can lose the trust of their customers, lose market share to competitors, and may even risk facing significant financial and regulatory liabilities,” he said.

CNN reached out several times via email and phone to the 12 companies who received an F grade, but only heard back from two.

Metro communications manager Stephanie Bonk told CNN: “We are unaware of this report and do not wish to comment.”

The parent company of Burger King, RBI, responded that existing product specifications require that “all approved plastic toys and promotional drink wear not contain bisphenol A (“BPAs”), and prohibit the use of perfluorooctanoic acid (“PFOAs”) within our approved paper and packaging products.”

RBI added: “We have very specific guidelines around the approved products that are used in our restaurants in order to ensure food safety. In the United States, this means ensuring our product and packaging specifications are compliant with FDA standards.”

In response, Schade told CNN: “The US Food and Drug Administration (FDA) and several states banned BPA in some infant and children’s products many years ago, but Burger King did not disclose action on BPA until fall 2019, which we acknowledged last year.”

When it comes to PFOAs, RBI’s actions “do not even go beyond regulatory compliance, as FDA already revoked the use of this chemical in food packaging. They are just saying they comply with the law,” he said.

Toxic chemicals that may be in products

In its fifth year, the Mind the Store campaign examines and grades the practices of 50 retail chains with more than 200,000 stores combined in the United States and Canada on their efforts to reduce chemicals known to harm human health.

This year’s grades were tallied on a rubric of 13 actions, including whether the company had publicly committed to a safer chemicals policy; required suppliers to document use of chemicals; kept suppliers accountable; and had reduced or eliminated chemicals or plastics of environmental and health concern within the last three years.

Phthalates, found in hundreds of auto, home, food and personal care items, have been linked to long-lasting neurodevelopmental harm in fetuses, infants and children.

Called “forever” chemicals, because they do not degrade in the environment, PFAS are so widespread that levels have been detected in the blood of 97% of Americans, according to a 2015 report by the US Centers for Disease Control and Prevention.

Research over the last decade has found exposure to PFAS to be associated with liver damage, immune disorders, cancer and endocrine disruption — meaning they mimic or interfere with the body’s natural hormonal processes.

Endocrine disrupters — such as the infamous pesticides DDT (dichloro-diphenyl-trichloroethane) and dioxin, plastic additives, bisphenol A (BPA) and phthalates — join PFAS chemicals in being linked with developmental, reproductive, brain, immune and other problems, according to the National Institute of Environmental Sciences.

Steady improvement for some companies

The 2021 report card also had excellent news, Schade said. Despite the pressures and economic uncertainties brought on by the pandemic, some 70% of the companies improved their scores since they were first evaluated, according to the report.

“In 2018, nearly half of the retailers received failing grades. But that number dropped to nearly one-third in 2019 and to one-quarter this year,” Schade said.

Six retailers received high scores of A- or above, according to the report card. Apple and Target have been consistent high performers over the years, and each received an A+ this year. IKEA and Walmart each earned an A-. For the first time, Sephora and Whole Foods Market were awarded A grades, the report card said.

In addition, retailers are increasingly phasing out entire classes of toxic chemicals. For example, 12 major retailers representing some 65,000 stores worldwide have now pledged to eliminate or reduce PFAS from food packaging, the report card said.

Some of those actions may prove to be significant, Schade said, pointing to Walmart and McDonald’s as examples.

Walmart had previously set a goal of reducing chemicals in products by 10% by 2022. The company announced in January it was halfway to its goal.

“They’ve reduced their chemical footprint by 5%,” Schade said. “While that doesn’t sound like a lot it translates to a reduction of 10 million pounds of toxic chemicals between 2017 and 2019.”

In January, McDonald’s pledged to phase out all PFAS in food packaging by 2025 and is tackling the issue of bisphenols and phthalates as well. That pledge was enough to move their score from an F to a D, Schade said, adding that if those actions rippled across the industry, McDonald’s could play a key role in creating change.

“As the largest fast-food chain in the world, actions by McDonald’s could change the entire industry as suppliers scramble to meet new requirements,” Schade said.

McDonalds sent this comment: “We’re proud to take another step in our product stewardship journey with our commitment to remove all added fluorinated compounds from our guest packaging materials globally by 2025.”

In an “unprecedented move” in the history of the report card, Target and Rite Aid announced they will now look for toxic chemicals in beauty products marketed to women of color, including skin lightening creams, hair straighteners and relaxers, Schade said.

The World Health Organization has called out the dangers of mercury in skin lightening creams, while studies have found endocrine-disrupting chemicals in hair relaxers and other products marketed to women of color.

Formaldehyde is released into the air as a gas when some hair solutions are applied and then processed with heat, according to the US Food and Drug Administration.

“Research shows that women of color have higher levels of toxic chemicals related to beauty products in their bodies, and this is linked to higher incidences of cancer, poor infant and maternal health outcomes, learning disabilities, obesity, asthma, and other serious health concerns,” said Taylor Morton, director of environmental health and education at WE ACT for Environmental Justice, in a statement.

Some of the greatest gains by companies evaluated by the report card were in the beauty and personal care sector. The report named Ulta Beauty as the most improved retailer — rising from an F result in 2019 to a C grade today. Sephora showed the greatest improvement over time, the report card found, moving from a D in 2017 to an A today.

There are several drivers for the progress seen by companies in combating toxic chemicals, Schade said, including the growing number of states who are passing regulations against the use of various chemicals in products sold in their states.

“If we look at the food packaging issue for example, just in the last couple years alone, the state of Washington, Maine and New York have all passed laws banning PFAS in food packaging despite the lack of federal action,” he said. “That patchwork of state policy is helping to drive retailers and stockholders to step up and restrict chemicals.”

Federal action may be forthcoming. When running for office, President Joe Biden pledged to “tackle PFAS pollution by designating PFAS as a hazardous substance, setting enforceable limits for PFAS in the Safe Drinking Water Act, prioritizing substitutes through procurement, and accelerating toxicity studies and research.”

Another reason for the progress is the “enormous” power of consumers who vote with their pocketbooks, Schade said.

“Consumers today want to know that the products that they buy for their families are safe and healthy,” Schade said, adding that the campaign has an Act Now button for consumers who would like to send messages to the 12 retailers in the Toxic Hall of Shame.

“We’ve had meetings with some of these companies like Burger King and Starbucks, and some of the other companies just blow us off, ignore us and hope we’ll just go away,” Schade said.

“We’re not going anywhere, and the consumers that are demanding safer and more sustainable products, they’re not going away either,” Schade said. “So that’s why we’re calling on these dozen companies to ‘Mind the Store’ and get their act together.”