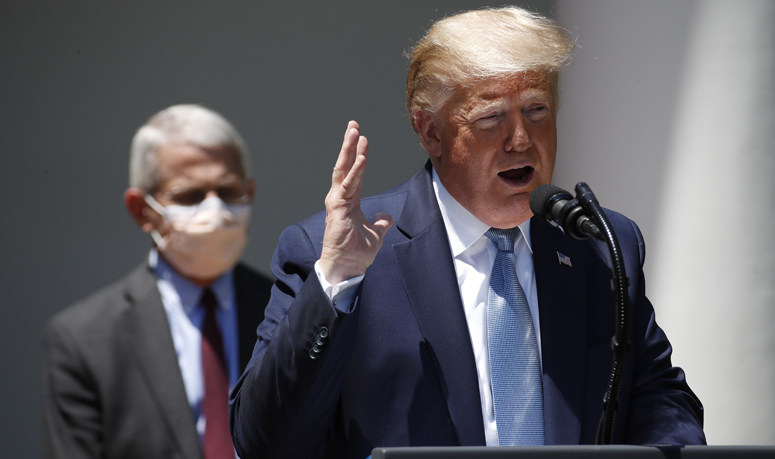 President Donald Trump speaks about the coronavirus in the Rose Garden of the White House, Friday, May 15, 2020, in Washington. Director of the National Institute of Allergy and Infectious Diseases Dr. Anthony Fauci listens at left. (AP Photo/Alex Brandon)
CNN

(CNN) — For months, amid the worst pandemic in a century, President Donald Trump insisted all was well between him and the nation’s top infectious disease specialist.

The pandemic is still around. The bonhomie with Dr. Anthony Fauci is not.

“Dr. Fauci is a nice man, but he’s made a lot of mistakes,” Trump said this week, undermining the public health expert Americans say in polls they trust more than the President.

With coronavirus raging, Trump and Fauci are no longer speaking. The President has taken to openly criticizing him on television. Fauci is expressing puzzlement at some of Trump’s claims.

When the coronavirus task force convened at the Department of Education this week, Fauci was told to beam in over the phone instead of attending in person.

While he’s conducted a flurry of newspaper and radio interviews, he has stopped appearing on major American television networks.

“I have a reputation, as you probably have figured out, of speaking the truth at all times and not sugar-coating things,” Fauci told the Financial Times this week. “And that may be one of the reasons why I haven’t been on television very much lately.”

Trump has long chafed at Fauci’s tacit rebukes and overt corrections of his misstatements. But at the start of the outbreak he generally remained quiet, understanding he gained little from undermining someone with widespread credibility among the American people.

Instead he declared the longtime director of the National Institute of Allergy and Infectious Diseases a “major television star for all the right reasons” — an outward compliment that nonetheless signaled to some allies of Trump, who does not like being upstaged or undermined, of trouble brewing.

Those suspicions were confirmed by mid-April, when signs of discord began emerging more publicly. Trump retweeted a conservative activist who used the hashtag #FireFauci in complaining about the doctor, though the White House insisted afterward that Trump had no plans to dismiss him and that “Fauci has been and remains a trusted advisor to President Trump.”

But a month later, as states began reopening — often without meeting the parameters conceived by Fauci and other members of the task force and issued by the White House — Trump began scaling up his public rebukes.

“He wants to play all sides of the equation,” Trump said of Fauci in mid-May.

Still, even then, both men claimed their relationship was not contentious. Officials confirmed that was mostly accurate. They did not engage in huge shouting matches or sniping. But Trump’s irritation at being publicly undermined was still evident in conversations with his friends and aides, when he complained that Fauci didn’t seem to be on his side.

By early June, Trump and Fauci had largely stopped in-person engagements. Fauci — who has advised every president since Ronald Reagan — told the Financial Times this week that he last saw Trump on June 2 at the White House, and hasn’t personally briefed him in at least two months.

In June, he stated on multiple occasions that Fauci wasn’t responsible for deciding the return of professional sports — “Tony Fauci has nothing to do with NFL Football” he wrote on Twitter — after Fauci questioned when leagues could begin play.

In recent interviews, he openly questioned the advice he’d received from Fauci at the start of the outbreak.

“I think we are in a good place. I disagree with him,” Trump said in an interview Tuesday when questioned about Fauci’s assertion the US is still “knee-deep in the first wave” of the pandemic.

Trump accused Fauci of waffling on early decisions in the crisis, saying he was better off ignoring experts and trusting his instincts.

“Dr. Fauci said don’t wear masks and now he says wear them,” he told Gray Television’s Greta Van Susteren. “And he said numerous things. Don’t close off China. Don’t ban China. I did it anyway. I didn’t listen to my experts and I banned China. We would have been in much worse shape. You wouldn’t believe the number of deaths more we would have had if we didn’t do the ban.”

Trump’s criticisms of Fauci don’t hold up entirely; the decision to advise against wearing masks was due largely to a nationwide shortage of them, and Fauci publicly backed the ban on travel from China when it was announced.

Still, Trump’s criticism reflects his conviction that the health experts who he assembled early in the pandemic have steered him wrong, a view that’s been fanned by some in the conservative media who have accused Fauci and others in the administration as imposing draconian lockdown measures despite being unelected officials.

In some ways, Fauci’s critics on Fox and in Congress have adjusted their complaints about him to reflect the type of criticism they know appeals to Trump. By casting him as an unelected bureaucrat who is attempting to undermine Trump, they’re harkening back to the “deep state” conspiracies that have fueled Trump countless times before.

Once a near-constant presence on television, Fauci has been relegated in recent weeks to newspaper interviews, online webcasts and radio. While his comments still gain widespread coverage — due both to his general credibility and a fascination with his relationship to Trump — they haven’t reached as wide an audience as a morning show or cable news interview.

In several this week, Fauci decried the politicization surrounding the federal coronavirus response, and said the nation would have been better served if leaders acted in unison.

“One of the problems we’re facing, is that in the middle of trying to fight an unprecedented historic pandemic, there is still divisiveness — there’s divisiveness politically,” he told The Hill. “We can see that when we look at the different viewpoints that people take towards this.”

“So I think you’d have to make the assumption that if there wasn’t such divisiveness, that we would have a more coordinated approach,” he later told FiveThiryEight’s podcast.

He didn’t mention the President specifically in those interviews. But asked in a conversation with the Financial Times about Trump’s false assertion that 99% of coronavirus cases are “totally harmless,” he seemed perplexed.

“I’m trying to figure out where the President got that number,” Fauci said. “What I think happened is that someone told him that the general mortality is about 1%. And he interpreted, therefore, that 99% is not a problem, when that’s obviously not the case.”

If he’s looking to get clarity directly from the President, however, he may have to wait.

Trump himself hasn’t attended a White House coronavirus task force meeting since April, according to administration officials. While the panel is meeting Friday at the White House, Trump is traveling to Florida on unrelated business. Fauci was seen arriving for the meeting mid-morning.