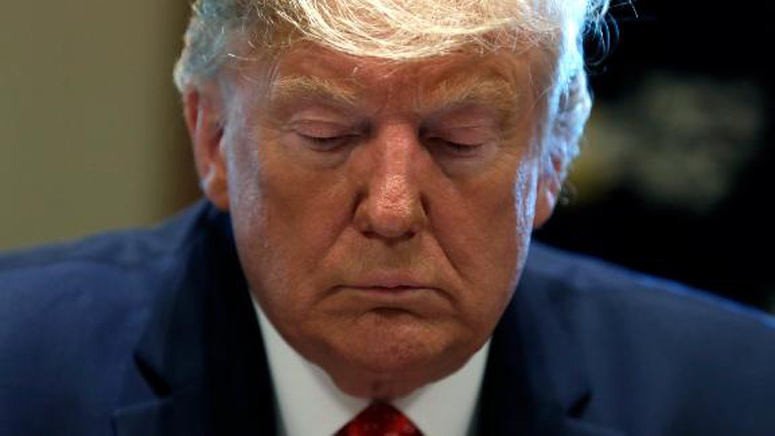 SCRANTON, Pa. (AP) — President Donald Trump defended his administration’s response to the new coronavirus and his confrontational style of name-calling political opponents as he fielded questions from the public Thursday in his first TV town hall of the 2020 election cycle.

Trump, who regularly calls his top Democratic opponents “Sleepy Joe” and “Crazy Bernie,” was asked whether he could deliver his message without the controversial rhetoric. “When they hit us, we have to hit back. I really feel that,” Trump said, giving no indication he was about to change his habits.

The first question came from an undecided voter who asked about the administration’s response to the new virus. The number of the cases in the U.S. stood at about 200 on Thursday, including 12 deaths — 11 in Washington state and one in California.

“Everybody has to be calm. It’s all going to work out,” Trump said. “We hope it doesn’t last too long.”

It’s Trump’s first visit this year to Pennsylvania, a battleground state he won by about 44,000 votes in 2016. He did particularly well in northeastern Pennsylvania, where Scranton and Wilkes-Barre have long anchored a strong Democratic presence.

That’s home turf to Biden, who spent his first 10 years in Scranton before his family moved to Wilmington, Delaware. An electric billboard reminded Trump of that as his motorcade sped into the city. “Scranton is Joe Biden country,” the board said.

Biden’s prospects of winning the Democratic nomination have surged in the past week since he won South Carolina and then 10 of 14 states on Super Tuesday. “I was all set to take on Bernie. I was ready,” Trump said.

The town hall was scheduled before Biden’s resurgence. Tickets were distributed through the Eventbrite website and Fox confirmed questions were selected from people who submitted them via the website. Trump chose the city for the town hall.

Democrats weren’t content to cede the stage. A political action committee that supports Democratic candidates planned to run a new ad on Fox News just before and after the town hall in targeted Pennsylvania markets and in Washington featuring a Pennsylvania veteran who voted for Trump in 2016 but no longer supports him. It’s part of American Bridge PAC’s latest $10 million wave of ads in key swing states aimed at cutting into Trump’s margins with white, working-class voters.

Trump regularly watches Fox News but has been critical of its polling from late February that showed him losing to the five leading Democratic candidates at that point. “Worst Polls, just like in 2016 when they were so far off the mark, are the @FoxNews Polls,” Trump tweeted.

Trump did an interview Wednesday with Fox’s Sean Hannity. At one point the president described the network as “our Fox News” before complaining, “They put people on that I think are inappropriate and say very, very false things and people don’t challenge them.”