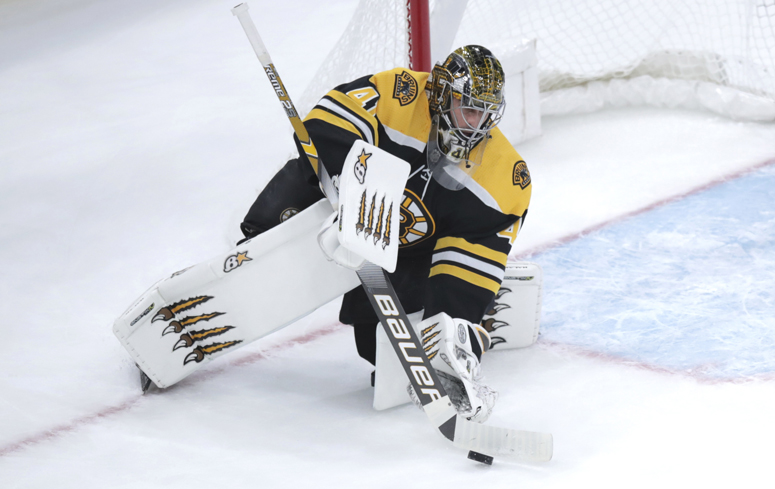 Even though Anton Khudobin left a backup goaltending role with Boston for a similar position with the Stars, he walked into the Dallas locker room looking like a starter.

Jaroslav Halak left a net-sharing situation with the Islanders for what appeared to be a backup job with the Bruins and quickly showed Boston he could shoulder whatever load was required.

Now in the second round of the playoffs, Khudobin and Halak have each been thrust into a prominent role in their mid-30s. They are joined by Colorado’s Pavel Francouz and Vegas’ Robin Lehner as unexpected starters who are making the most of their chances in an unusual NHL postseason.

“Not surprised by it for Doby, not surprised by it for Jaro: two good goaltenders getting an opportunity and here we are,” said Bruce Cassidy, who has coached Khudobin and Halak with Boston. “Both teams are very comfortable in front of their backups, and that matters, too. You can’t be nervous out there if you don’t trust your goaltender.”

One of the most common phrases among players and coaches since hockey resumed is having trust in both goaltenders for a given team. Khudobin, Halak, Francouz and Lehner have proven that to be more than a cliche while taking over under different circumstances.

Khudobin hadn’t made a single start in the Stanley Cup playoffs until this month, when Dallas starter Ben Bishop was deemed “unfit to play.” Khudobin won six of his first nine starts with a 2.49 goals-against average and .921 save percentage.

“When I play more, I feel better,” said Khudobin, with his fifth NHL organization. “It’s a different scenario right now playing every other day, but at the same time it’s playoff. You can’t think about it — just have to prepare and just go play.”

Dallas coach Rick Bowness knew all about Bishop from his time as an assistant with Tampa Bay. Since the Stars signed Khudobin to a short-term deal paying him roughly half of what Bishop makes, Bowness has watched the journeyman backstop them to the playoffs in 2018-19 and lead the league in save percentage this year when the season was stopped.

Playoff Khudobin is just the continuation of that.

“What we’re seeing, we’re not surprised,” Bowness said. “We’ve grown to expect stellar play from him from the moment we signed him.”

Vegas has grown to expect the same from Lehner, a trade deadline acquisition from Chicago who has surpassed Marc-Andre Fleury as the starter in the playoffs. Lehner has started eight of 10 games, prompting a tweet from Fleury’s agent criticizing coach Peter DeBoer that was later deleted.

Fleury commended Lehner as “a very good goalie.” And Lehner said he and Fleury laughed about it, leaning on his experiences with the New York Islanders and Blackhawks to move past the drama.

“I’m used to this stuff,” said Lehner, who has a 2.34 GAA and .909 save percentage. “I went to Long Island, (Thomas) Greiss was kind of a fan favorite there, then I go to Chicago and you play with (two-time Cup winner Corey) Crawford and you compete as best you can. And here it’s with Fleury. It’s just part of the game.”

So are injuries, and the Avalanche are used to them. When Philipp Grubauer was injured in Game 1 against Dallas and ruled out indefinitely, Colorado turned to Francouz, who’s in his first full NHL season after playing professionally in Europe.

Coach Jared Bednar knew about Francouz’s success with the Czech Republic in the 2018 Olympics and about his background, though his trust in the 30-year-old comes from him putting up a 2.41 GAA and .923 save percentage in the regular season.

“He’s gone from a guy that was clearly our backup and coming in as an unproven guy, stepping into the NHL for the first time and he’s had to come in in relief, he’s had to come in and do a scheduled start every 10 days to two weeks and played well in both those situations,” Bednar said.

The Bruins had no choice but to turn to Halak when starter Tuukka Rask opted out midway through the first round to return to his family. Halak last won a playoff series with Montreal 10 years ago, but Boston general manager Don Sweeney said the veteran was ready — and has shown it.

“We’ve split starts, we’ve really rarely played players back to back,” Sweeney said. “Jaro’s a pro. Over the last two years we’ve been a hockey club that’s relied on everybody and Jaro’s been a part of that.”

Halak and Lehner’s old Islanders battery mate, Greiss, might get a similar opportunity after stopping 20 of 21 Philadelphia shots in relief of Semyon Varlamov on Wednesday.

“He looked very comfortable, which is a great sign,” New York coach Barry Trotz said. “It’s a positive for his attitude and his work ethic in our goaltending department. As we say, you have to be ready in the playoffs, and he was definitely ready.”