US border encounters of migrant families rise despite heat 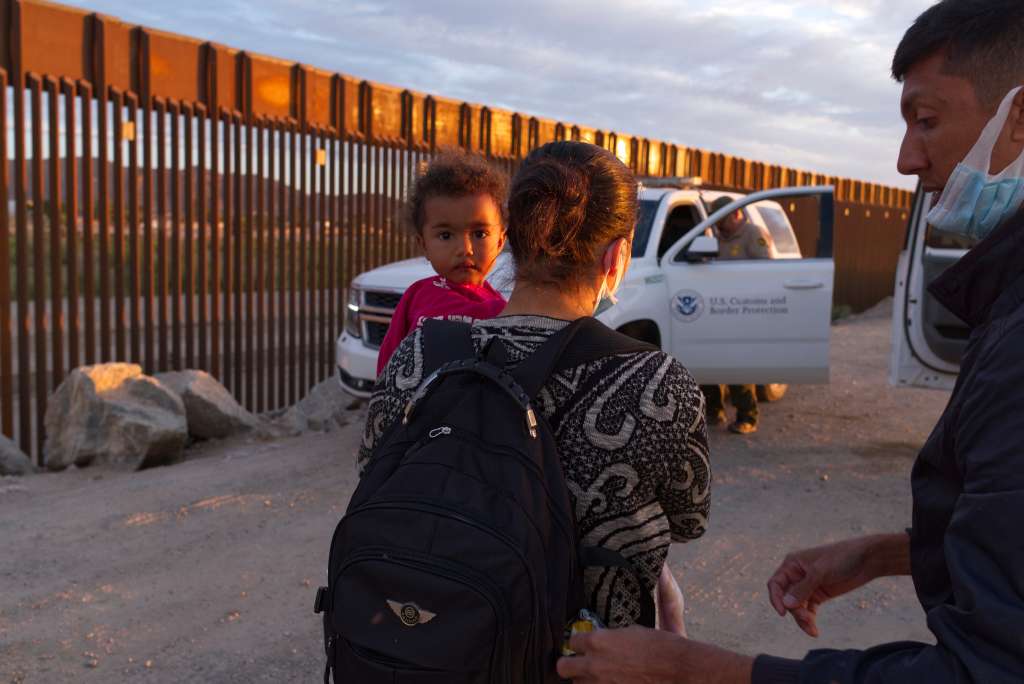 FILE - In this June 10, 2021, file photo, a migrant family from Brazil waits to be processed by U.S. Border Patrol agents after passing through a gap in the border wall from Mexico in Yuma, Ariz. U.S. officials say attempted border crossings by migrants traveling in family groups that include children increased in June by a quarter over the previous month amid rising summer temperatures in the inhospitable deserts and mountain terrain of the American Southwest. (AP Photo/Eugene Garcia, File)

PHOENIX (AP) — U.S. officials say the number of migrant families they encountered at the border in June increased by 25% from the previous month even as summer temperatures rise in the deserts and mountain terrain of the southwestern borderlands.

According to new numbers released Friday, U.S. Customs and Border Protection tallied 55,805 members of families with children in June, compared with 44,746 in May. While a large increase, the figure is far below the high of 88,587 in May 2019.

Overall, officials say they saw 5% more encounters with migrants trying to cross the border in June compared with May but attributed much of that increase to repeated attempts by people trying to get into the United States.

Pandemic-related powers that the government uses to rapidly expel most migrants from the country without allowing them to seek asylum has led to a larger-than-average number of migrants trying to cross multiple times, which means the numbers “somewhat overstate” how many are arriving at the border, Customs and Border Protection said in the monthly report.

Being expelled carries no legal consequences, so many people try to cross multiple times. The Trump administration issued the public health order in March 2020 to prevent the spread of the coronavirus, and President Joe Biden has largely kept it in place.

The new numbers show slightly more than a third of the 188,829 people encountered at the border in June had unsuccessfully tried to cross at least one other time in the previous 12 months.

The CBP last month expelled 104,907 people under the pandemic powers.

The number of single adults encountered at the border fell in June, but they were the largest group of people trying to cross. Encounters with children traveling alone increased by 8% last month, to 15,253, compared with 14,137 in May. June’s figure is still well below the high of 18,663 unaccompanied children encountered in March by the Border Patrol, which began publishing numbers in 2009.

Although most border-crossers traditionally have been from Mexico and Central America, authorities have been noting growing numbers of migrants from other countries, including Ecuador, Venezuela, Brazil and Cuba.

CBP officials in recent weeks have been expressing concerns about the dangers migrants face crossing through remote borderlands without water at the height of summer.

“We are in the hottest part of the summer, and we are seeing a high number of distress calls to CBP from migrants abandoned in treacherous terrain by smugglers with no regard for human life,” CBP Acting Commissioner Troy Miller said in Friday’s report.

The bodies of an unusually large number of migrants who died in Arizona’s borderlands are being recovered amid record temperatures in the sun-scorched desert and rugged mountains. An increase in migrant deaths also has been noted in Texas, and rescues are up throughout the border with Mexico.

The nonprofit group Humane Borders, which maps the recoveries of bodies in Arizona using data from the Pima County Medical Examiner’s Office in Tucson, said 43 sets of human remains were found in the state’s border region last month — the hottest June on record for Phoenix. Forecasters say highs in Phoenix, where temperatures last month regularly soared above 110 degrees Fahrenheit (43 Celsius), tend to be similar to those in Arizona’s Sonoran Desert north of Mexico.