US official: Russia plans to annex parts of eastern Ukraine 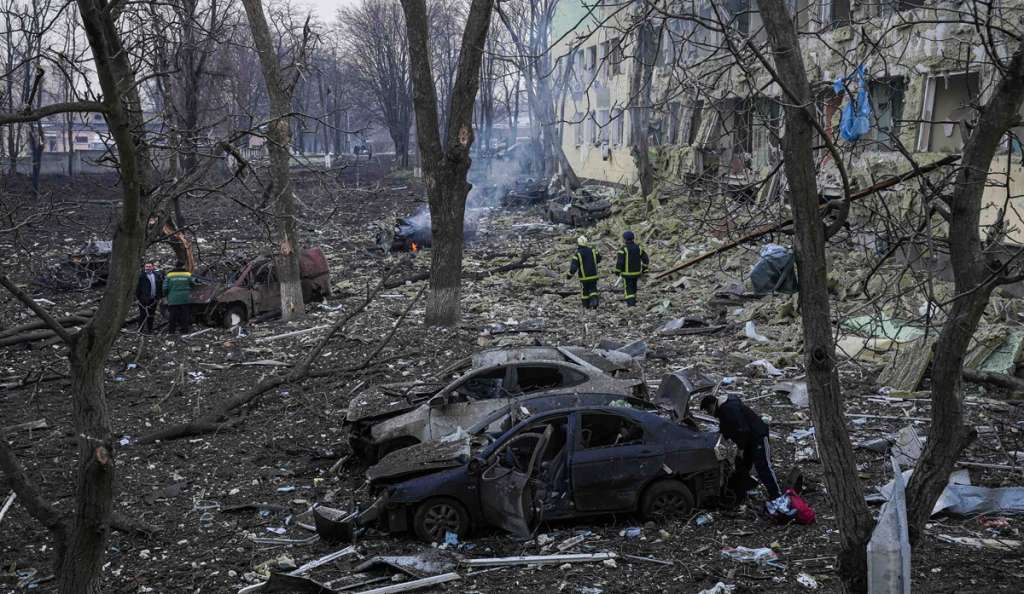 ZAPORIZHZHIA, Ukraine (AP) — Russia plans to annex much of eastern Ukraine later this month, a senior U.S. official warned, and the Mariupol steel mill that is the city’s last stronghold of resistance came under renewed assault a day after the first evacuation of civilians from the plant.

Michael Carpenter, U.S. ambassador to the Organization for Security and Cooperation in Europe, said Monday that the U.S. believes the Kremlin also will recognize the southern city of Kherson as an independent republic. Neither move would be recognized by the United States or its allies, he said.

Russia is planning to hold sham referendums in the Donetsk and Luhansk regions that would “try to add a veneer of democratic or electoral legitimacy” and attach the entities to Russia, Carpenter said. He also said there were signs that Russia would engineer an independence vote in Kherson.

Mayors and local legislators there have been abducted, internet and cellphone service has been severed and a Russian school curriculum will soon be imposed, Carpenter said. Ukraine’s government says Russia has introduced its ruble as currency there.

More than 100 people — including elderly women and mothers with small children — left Mariupol’s rubble-strewn Azovstal steelworks Sunday and set out in buses and ambulances for the Ukrainian-controlled city of Zaporizhzhia, about 140 miles (230 kilometers) to the northwest. Mariupol Deputy Mayor Sergei Orlov told the BBC that the evacuees were making slow progress.

Authorities gave no explanation for the delay.

At least some of the civilians were apparently taken to a village controlled by Russia-backed separatists. The Russian military said some chose to stay in separatist areas, while dozens left for Ukrainian-held territory.

In the past, Ukraine has accused Moscow’s troops of taking civilians against their will to Russia or Russian-controlled areas. The Kremlin has denied it.

The Russian bombardment of the sprawling plant by air, tank and ship resumed after the partial evacuation, Ukraine’s Azov Battalion, which is helping to defend the mill, said on the Telegram messaging app.

The steel-plant evacuation, if successful, would be rare progress in easing the human cost of the almost 10-week war, which has caused particular suffering in Mariupol. Previous attempts to open safe corridors out of the southern port city and other places have broken down, with Ukrainian officials accusing Russian forces of shooting and shelling along agreed-on evacuation routes.

Before the weekend evacuation, overseen by the United Nations and the Red Cross, about 1,000 civilians were believed to be in the plant along with an estimated 2,000 Ukrainian defenders who have refused Russian demands they surrender.

As many as 100,000 people overall may still be in Mariupol, which had a prewar population of more than 400,000. Russian forces have pounded much of the city into rubble, trapping civilians with little food, water, heat or medicine.

Some Mariupol residents left on their own, often in damaged private cars.

As sunset approached, Mariupol resident Yaroslav Dmytryshyn rattled up to a reception center in Zaporizhzhia in a car with a back seat full of youngsters and two signs taped to the back window: “Children” and “Little ones.”

“I can’t believe we survived,” he said, looking worn but in good spirits after two days on the road.

“There is no Mariupol whatsoever,” he said. “Someone needs to rebuild it, and it will take millions of tons of gold.” He said they lived just across the railroad tracks from the steel plant. “Ruined,” he said. “The factory is gone completely.”

Anastasiia Dembytska, who took advantage of the cease-fire to leave with her daughter, nephew and dog, said she could see the steelworks from her window, when she dared to look.

“We could see the rockets flying” and clouds of smoke over the plant, she said.

Ukrainian President Volodymyr Zelenskyy told Greek state television that remaining civilians in the steel plant were afraid to board buses, fearing they would be taken to Russia. He said the U.N. assured him they could go to areas his government controls.

Mariupol lies in the Donbas, Ukraine’s eastern industrial heartland, and is key to Russia’s campaign in the east. Its capture would deprive Ukraine of a vital port, allow Russia to establish a land corridor to the Crimean Peninsula, which it seized from Ukraine in 2014, and free up troops for fighting elsewhere.

More than 1 million people, including nearly 200,000 children, have been taken from Ukraine to Russia, Russia’s Defense Ministry said Monday, according to state-owned news agency TASS.

Defense Ministry official Mikhail Mizintsev said that number included 11,550 people, including 1,847 children, in the previous 24 hours, “without the participation of the Ukrainian authorities.”

Those civilians “were evacuated to the territory of the Russian Federation from the dangerous regions of the Donetsk and Luhansk People’s Republics,” and other parts of Ukraine, according to the report. No details were provided.

Zelenskyy said Monday that at least 220 Ukrainian children have been killed by the Russian army since the war began, and 1,570 educational institutions have been destroyed or damaged.

Failing to seize Kyiv, the capital, Russian President Vladimir Putin shifted his focus to the Donbas, where Moscow-backed separatists have been battling Ukrainian forces since 2014.

Russia said it struck dozens of military targets in the region, including concentrations of troops and weapons and an ammunition depot near Chervone in the Zaporizhzhia region, west of the Donbas.

The governor of the Odesa region along the Black Sea Coast, Maksym Marchenko, said on Telegram that a Russian missile strike Monday caused deaths and injuries. He gave no details. Zelenskyy said the attack destroyed a dormitory and killed a 14-year-old boy.

Ukraine said Russia also struck a strategic road and rail bridge west of Odesa. The bridge was heavily damaged in previous Russian strikes, and its destruction would cut a supply route for weapons and other cargo from neighboring Romania.

However a satellite image captured by Planet Labs PBC and analyzed by The Associated Press showed the bridge still standing as of noon Monday.

Another image, taken Monday, showed nearly 50 Russian military helicopters at Stary Oskol, a Russian base close to the Ukrainian border and some 175 kilometers (110 miles) northeast of the Ukrainian city of Kharkiv.

The helicopters were stationed on the tarmac, runway and grass of the otherwise civilian airport, with military equipment nearby.

In the war in Ukraine, Russia has been flying military attack helicopters low to the ground to try to avoid anti-aircraft missiles.