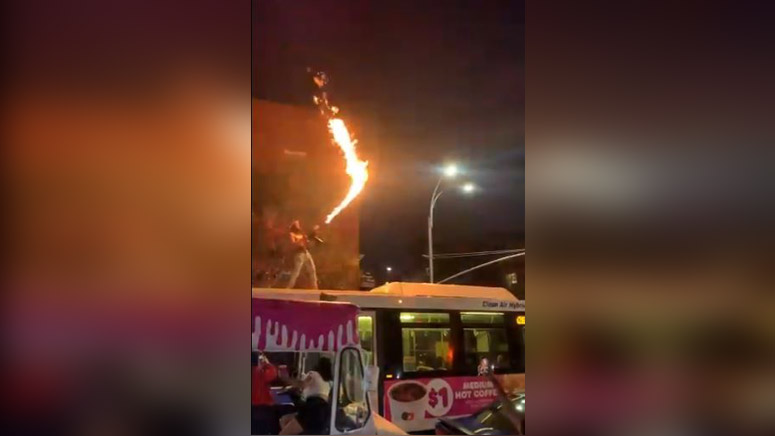 NEW YORK (AP) — A rapper who said he was making a tribute to a legendary New York City hip-hop group was recorded shooting a flamethrower from the top of an occupied city bus in an unsanctioned stunt a transit agency spokesman called “absurd, dangerous and just plain stupid.”

Bystander video, taken in Brooklyn earlier this month, gained attention on social media on Tuesday after a police union tweeted it as an example of the city becoming less safe. The police department said it was investigating the Nov. 8 incident.

The city’s transit agency said it was an unauthorized event performed by the rapper Dupree G.O.D, who said in an Instagram post that he was shooting a video tribute to the Wu-Tang Clan, the celebrated New York City hip-hop group.

Dupree, who also refers to himself as the Flame G.O.D, posted drone footage of the effort. In an earlier Instagram post, he invited people to the area for ice cream, T-shirts and champagne. A message seeking comment was left with Dupree.

The Metropolitan Transportation Authority said 25 passengers on the bus were discharged at the next stop and picked up by the next bus on the route. No injuries were reported.

“We don’t even need to say how absurd, dangerous and just plain stupid this was,” MTA spokesperson Tim Minton said. “The reckless individual who torched over the top of an occupied bus put New Yorkers, including the bus operator, in life-threatening peril.”