CONCORD, MASS. (WHDH) - Firefighters from several area communities dealt with water access issues as they battled a raging multi-alarm blaze that reduced a sprawling, multi-million dollar mansion in one of Concord’s oldest neighborhoods to a pile of rubble on Friday.

Crews responding to a reported fire at the 120-year-old home at 240 Fairhaven Hill Road around 10:30 a.m. found heavy flames shooting from the attic and thick smoke billowing into the sky.

The 6,500-square-foot structure was designed by architect Herbert D. Hale and constructed in 1899 for Charles Francis Adams III, son of John Quincy Adams, Massachusetts historical records indicate. The wood-frame home was commonly referred to as the “Mount Vernon” estate.

As the fire raged on into the afternoon, it spread across the roof and down to the lower levels of the home, where flames could be seen bursting through windows, the front door, and consuming towering white columns, causing the portico to collapse.

“The fire started extending to the second floor and then the third floor. We had crews inside from Concord, Lexington, and Bedford,” Concord Assistant Fire Chief Walter Latta told reporters. “As you can see, the fire got away from us.”

Video from SKY7 HD showed several ladder trucks working to get close to the home, which appeared to be secluded and set back on a large piece of property in a wooded area.

Chunks of charred wood could be seen crashing to the ground as the fire started to eat away at the home’s facade.

The roof, a second-level walkout patio, and chimney also caved in as giant plumes of black smoke that were spotted from a mile away consumed the area.

Video of the smoldering aftermath showed smoke rising from the ashes of the gutted home, which has been deemed a total loss. 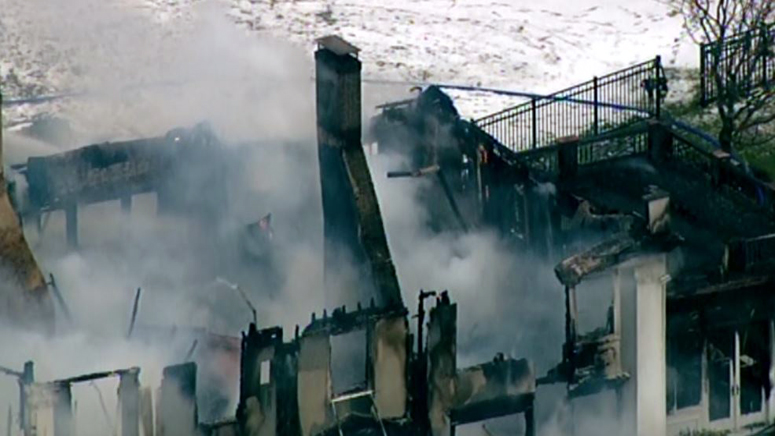 Firefighters used water tankers to fill up large tubs because there was just a single 30,000-gallon water source in the immediate area.

There are few fire hydrants in the neighborhood because the home is located in one of the oldest parts of the town, according to Concord Fire Chief Thomas Judge.

“We were having water supply problems as you could probably see,” Judge told reporters. “There are no hydrants up in this part of our town.”

Neighborhood resident Rodd Malitsky said the area’s private water system is “one of the oldest in Massachusetts.”

“It’s obviously flawed,” Malitsky said of the water system. “A lot of the neighbors are actually putting in wells. We’re next. I might speed up that process.”

The home, which sits on 13 acres of land, had five bedrooms and five bathrooms, town records show. It was valued at nearly $3 million.

Two people were home when the fire broke out but they were able to escape to safety.

No firefighters were injured in the hourslong battle.

#BREAKING Crews filling up tub with thousands of gallons of water to be used to help fight fire in Concord, Ma #7News pic.twitter.com/SioaOyQoCq

More from scene. Just spoke with a neighbor who says water has always been a concern and worry when it comes to fires #7News pic.twitter.com/gjJN0shqOF