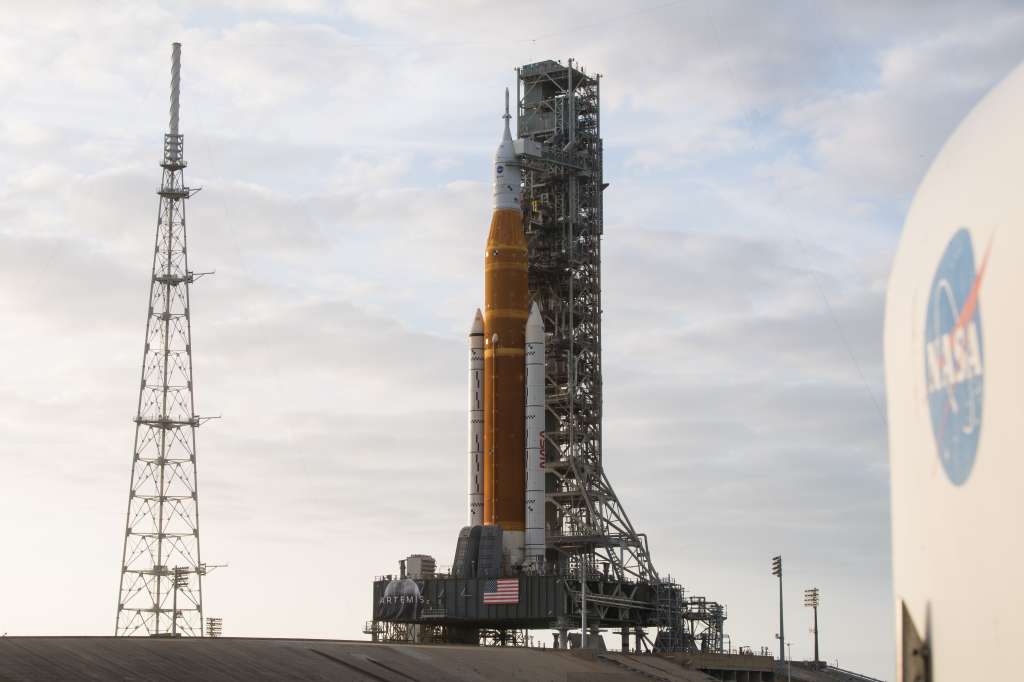 NASA’s Space Launch System (SLS) rocket with the Orion spacecraft aboard is seen atop a mobile launcher at Launch Complex 39B, Thursday, April 21, 2022, at NASA’s Kennedy Space Center in Florida. Photo Credit: NASA/Aubrey Gemignani via Flickr

(CNN) — Few things are more exciting than watching a spacecraft lift off the launchpad and set off on a cosmic quest, as NASA’s Artemis I mission is poised to do Monday.

But if you’re a casual observer, it may be that few things are more confusing than hearing some of the jargon used by mission control.

Celebrities and spectators from around the globe will gather at NASA’s Kennedy Space Center in Florida to see the new Space Launch System rocket and uncrewed Orion spacecraft embark on their journey toward the moon.

And for those who can’t make it in person, live feeds will be available on a number of platforms and watch parties have cropped up across the country. That’s a lot of people trying to distinguish LH2 from LO2 and figure out what in the world L Minus is.

For everyone who’s not a NASA scientist or amateur astrophysicist, here are some of the terms you might hear during the historic launch — and what they mean.

NASA is aiming to launch Artemis I between 8:33 a.m. and 10:33 a.m. ET Monday — with backup windows on September 2 and September 5 in case of bad weather or any delays. If the launch is a “go,” that means things are on track. If it’s a “no go,” the launch may be postponed.

As mission teams go through the countdown, they’ll be using phrases and shorthand that may be unfamiliar. Expect to hear “SLS” to indicate the rocket, rather than Space Launch System, and “nominal” to mean that things are normal or going as planned.

When the rocket is being loaded with cryogenic (supercold) liquid oxygen and liquid hydrogen to fuel liftoff, the shorthand is “LO2” for oxygen and “LH2” for hydrogen.

There’s a good chance the Artemis launch team will mention “ICPS,” which refers to the interim cryogenic propulsion stage. This upper segment of the rocket will give Orion the propulsion it needs in space after the two solid-fuel rocket boosters and core stage, or backbone, of the rocket separate from the spacecraft.

The core stage of the rocket includes engines, propellant tanks and avionics, or aviation electronic systems.

During the countdown, teams will refer to “L Minus” and “T Minus” times.

“L Minus” is used to indicate the time until liftoff in hours and minutes, while “T Minus” corresponds with the events included in the launch countdown.

If the launch team announces a “hold,” it’s a natural pause in the countdown intended to allow for tasks or waiting for a specific launch window that doesn’t disrupt the schedule. During a hold, expect the countdown clock and T Minus time to stop, while the L Minus time will continue.

Several “burns,” which take place when the propulsion system fires up, likely will get a mention post-liftoff.

READ MORE: Artemis I by the numbers

The “perigee raise maneuver” will occur about 12 minutes after launch. That’s when the ICPS experiences a burn to raise Orion’s altitude so it doesn’t reenter Earth’s atmosphere.

Around 4:30 p.m. Monday, Orion will make its first “outbound trajectory correction burn” using the European Service Module, which provides the spacecraft with power, propulsion and thermal control. This maneuver will put Orion on a path to the moon.

During its journey, Artemis I will venture farther beyond the moon than any spacecraft intended to carry humans. It is expected to spend 42 days in space, entering a distant retrograde orbit around the moon before splashing down in the Pacific Ocean off San Diego on October 10.

Check out our mission timeline for everything you need to know about the launch countdown and what happens during the six-week mission. It’s just the beginning of the Artemis program, which aims to return humans to the moon and eventually land crewed missions on Mars.