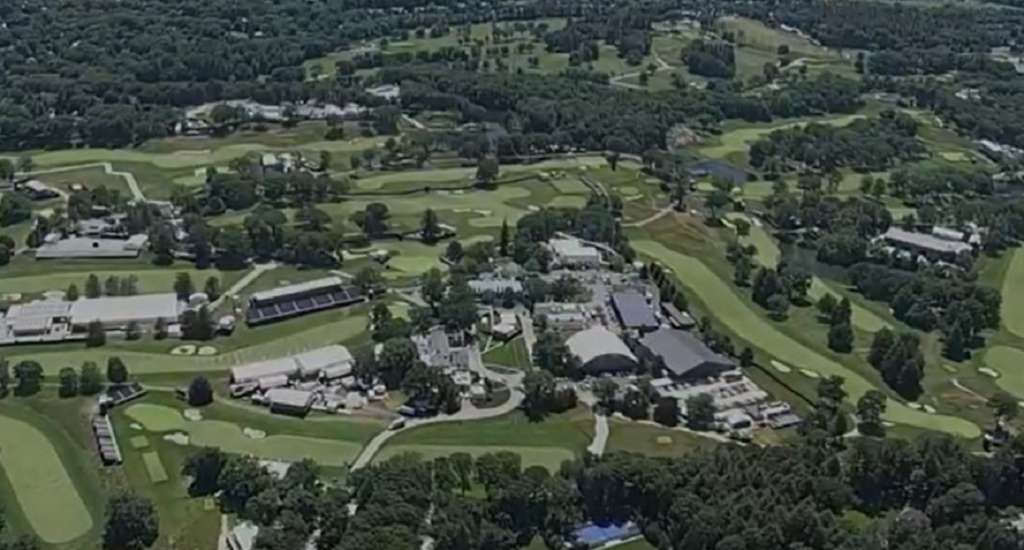 BROOKLINE, Mass. (AP) — Jon Rahm began his U.S. Open title defense with a 1-under 69, a solid score Thursday at The Country Club that ended with a par and a birdie.

His final two holes had a little more excitement that numbers alone can reveal.

Rahm pulled his driver on the par-4 17th hole and said to his caddie, Adam Hayes, “That might be out-of-bounds.” There’s no OB, but the ball could have been lost or unplayable, and the stroke-and-distance penalty the same.

The caddie marked up another ball and handed it to him. The second one was more of a hook. Hayes reached for another ball.

At that point, Rahm would have been hitting his fifth shot. But he saw a marshal finally signaled the ball was safe. Rahm’s first ball was in play, he hit wedge out of the rough to 12 feet and missed the birdie putt.

“I fully know how lucky I got on that hole, and I tried to take advantage to make a birdie, but I’ll take the 4 and run any day of the week,” Rahm said.

The next hole was even more entertaining. He hit another hook, this one disappearing over the fence toward the television compound. Spotters found the ball under the tent, and then it was gone. Turns out two kids grabbed it and off they went.

He was just happy the ball was seen in the first place. Rahm got relief from the TV tent and good fortune kept coming his way when he took his drop. The rough wasn’t very thick and Rahm only had 125 yards to cover the bunker in front of the green.

“I don’t think they expected anybody to hit it there or be around there, so I was able to drop it in an area that was a little down grain, and I wasn’t in jeopardy of carrying the bunker,” he said.

It ended with a 12-foot birdie putt and a fist pump. Quite the finish.

“If that doesn’t scream to you it’s the Open,” then nothing will, he said. “Sometimes you play good golf and can’t get things going and sometimes you get a break.”

MJ Daffue never could have imagined the year would have gone this way, much less a 67 in the opening round of the U.S. Open, his first major.

Not after starting the year sick from the coronavirus in January.

The South African was was the seventh-to-last player to get into the first Korn Ferry Tour event in the Bahamas. He tied for 15th. A month later, he had consecutive top 10s. And when he successive top 3s, he had secured enough points for the South African to earn a PGA Tour card next season.

And then it got even better.

Daffue (pronounced “Duffy”) shared medalist honors in U.S. Open qualifying in Springfield, Ohio. On Thursday, he made six birdies at The Country Club.

“I think now I’ve finally this week probably started feeling the freedom,” he said. “I secured my card next year, and maybe I can go for a few more things that I would never have.”

It was a long road to the PGA Tour, even the U.S. Open, but he figures the hard times got him here. The greatest lessons come from all the Monday qualifying he can go through for tour events.

“It really taught me to make a lot of birdies,” he said. “I’ve translated that into my game. I would say I’ve been shooting pretty good scores for a while, and they’ve been telling me just keep your head down and keep shooting good scores, and eventually it’s good enough.”

It certainly was on Thursday at the Open.

Jordan Spieth had a stomach bug Wednesday and cut short his final day of practice. He did make it to the tee Thursday and had more excitement inside the ropes than he needed.

Spieth had two pars, three birdies and four bogeys on the front nine. He took bogey on No. 10, and when he cashed in for birdie on he 17th, he gave that shot back on the closing hole for 72.

He declined interview requests, saying he was tired.

Patrick Cantlay also had limited practice recovering from an illness. He also shot 72.

Abraham Ancer withdrew Thursday morning because of illness, making him the only player to withdraw during the week. He was replaced by Patton Kizzire.

Next in line as alternate was Rickie Fowler, who never got into the U.S. Open. Fowler still attracted a crowd of television cameras, mainly from offering to speak to a Lee Elder Foundation scholarship group between the morning and afternoon waves.

Fowler had played in 10 consecutive U.S. Opens. He now has missed each of the last two years.