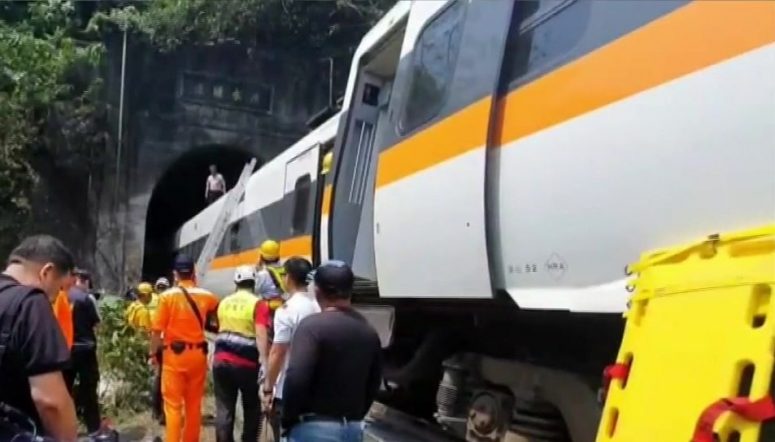 TAIPEI, Taiwan (AP) — Investigators looking into Taiwan’s deadliest railway disaster in decades combed through the crushed wreckage and debris for three days before they found the microSD chip from the dashboard camera of a construction truck that collided with a train coming out of a tunnel, officials said Tuesday.

That dashboard footage, the black box on the train, surveillance footage and railway records have allowed investigators to reconstruct Friday’s accident, though a more detailed investigation is still underway, officials with Taiwan’s Transportation Safety Board said at a news conference.

The officials declined to provide conclusions about the exact cause of the accident, which killed 50 people and injured 211.

The initial findings show the construction truck’s engine was still on just minutes before the collision, investigators said. The engine turned off after the truck made a sharp turn on a path at the construction site and got stuck in bushes. Then it tumbled down a slope onto the tracks, but officials could not confirm why it had shut off.

The truck remained on the tracks for a little more than a minute before the Taroko Express Train collided with it head-on as it came out of a tunnel, said Yang Hong-chih, director of the Transportation Safety Board.

The train’s driver engaged the manual brakes to try and slow down the train traveling at 127 kilometers per hour (79 miles per hour), but there was little he could to do slow it down enough to avoid harm in the short time he had. The collision was so violent that the train carried part of the truck body an additional 320 meters (1,049 feet) into another tunnel before it all finally came to a stop.

Workers are still on the ground working to remove the last two cars of the train, including the driver’s cabin, which sustained the most damage.

The new information provided by investigators contradicts earlier media reports in which the truck driver had told reporters that he had left the truck parked at the construction site.

Deputy Transport Minister Wang Kwo-Tsai said Monday the government will sue the driver and owner of the truck, Lee Yi-hsiang, and Tung Hsin Construction Company, which was the construction site contractor. The courts have already frozen assets of both Lee and the company.

Lee, who was the manager of the construction site, has been detained since Sunday when a local court in Hualien county initially granted bail but then revoked it.