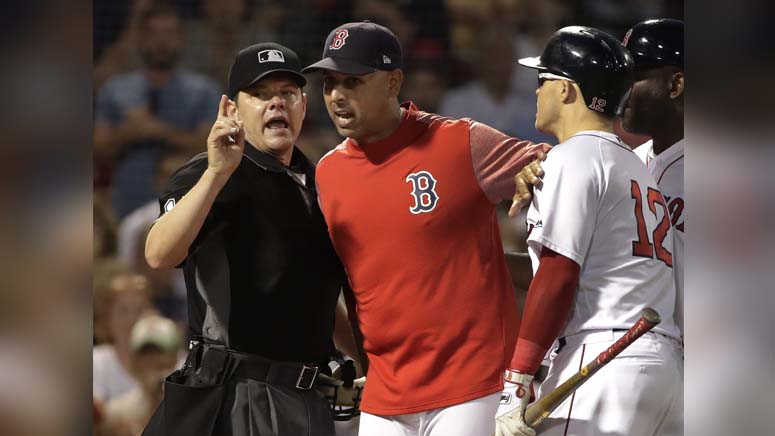 Boston Red Sox manager Alex Cora, middle, keeps Brock Holt (12) away from home plate umpire D.J. Reyburn as he is ejected for arguing a called strike in the third inning of a baseball game against the New York Yankees at Fenway Park, Thursday, July 25, 2019, in Boston. (AP Photo/Elise Amendola)

BOSTON (AP) — The Boston Red Sox will rehire Alex Cora as manager, a person with knowledge of the decision told The Associated Press, restoring him to the dugout less than a year after letting him go because of his role in the Houston Astros cheating scandal.

The person spoke to the AP on the condition of anonymity on Friday because the sides were still finalizing terms of the agreement and the move was not ready to be announced.

The decision came about a week after Cora finished serving a one-season suspension assessed by Commissioner Rob Manfred for Cora’s cheating while bench coach of the Houston Astros during their run to the World Series championship in 2017. Cora joined the Red Sox in November 2017 and led Boston to the 2018 World Series title after a franchise-record 108 regular-season wins.

Boston finished third in 2019, and Cora was identified by Manfred last Jan. 13 as the ringleader in the Astros’ sign-stealing scheme, with his penalty held off until Manfred ruled on sign stealing allegations against Boston. An infielder on Boston’s 2007 champions, Cora was mentioned 11 times in Manfred’s decision on the Astros.

Hinch was hired as Detroit Tigers manager on Oct. 30 after completing a one-season suspension. Beltrán was a player on the 2017 Astros and was implicated by Manfred in the cheating scheme but not players were disciplined.

Manfred absolved Cora of misconduct while with the Red Sox in his report on April 22 and suspended Cora through the World Series for his conduct with Houston. Ron Roenicke, promoted from bench coach to Cora’s replacement, was let go after the salary-shedding Red Sox stumbled to a last-place finish in the AL East.

“Alex should be managing. He did a really good job here,” Roenicke, who was a bench coach on Cora’s staff, told reporters after he was fired. “I’m hoping he does this again. Whether it’s here or its somewhere else, he should be managing.”

The Red Sox were was not allowed to speak to Cora until after the World Series, which ended Oct. 27. The lack of activity was a sign that they were focused on Cora.

The team he returns to bears little resemblance to the one he last managed.

Chaim Bloom is running the baseball side now, taking over last offseason just in time to part ways with Cora. Bloom’s other big move last offseason was to trade 2018 AL MVP Mookie Betts to the Los Angeles Dodgers along with David Price as part of an effort to get the Red Sox under the threshold for baseball’s collective bargaining tax.

With Betts and Price gone, Chris Sale out with Tommy John surgery and Eduardo Rodriguez recovering from a COVID-19-related heart problem, the Red Sox went 24-36 and finished in last place in the AL East.

But Cora also has hope for improvement in the 2021 season — if there is one.

Sale is expected to return in the first half. J.D. Martinez, an All-Star his first two years in Boston before struggling in the pandemic-shortened 2020 season, is also under contract for at least one more year.

And the Red Sox have plenty of salary flexibility gained in the deal that sent Betts and Price to Los Angeles.