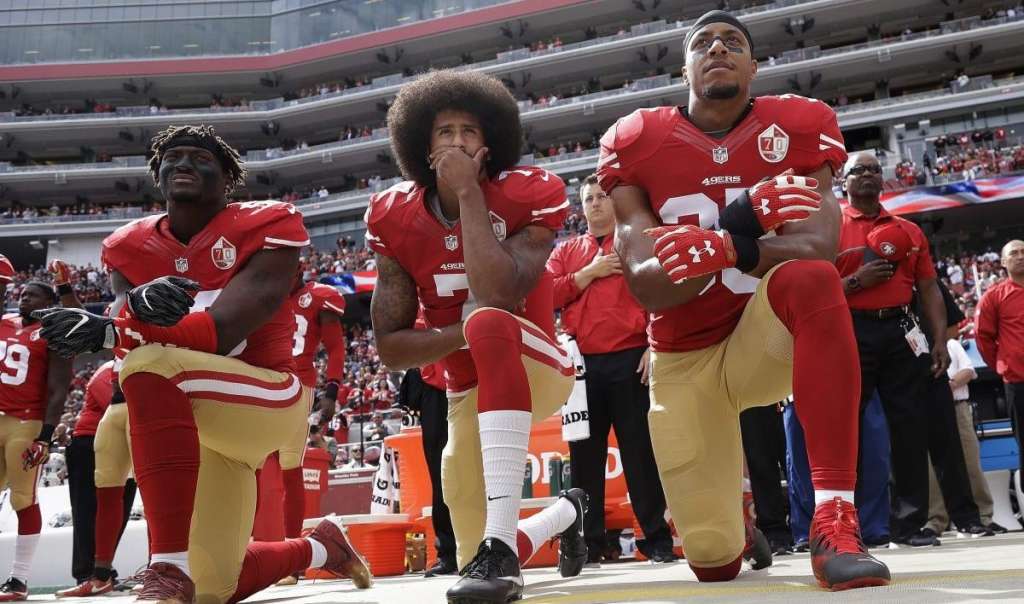 (CNN) — While the legacy of his kneeling protest against police brutality and racial injustice continues to underscore sporting events around the world, Colin Kaepernick has not been involved in an NFL game in over five years — and he hasn’t given up on playing again.

In a rare interview ahead of the release of his upcoming Netflix biopic series, “Colin in Black and White,” Kaepernick detailed the intensive training regime he still undergoes.

“I am still up at 5 a.m. training five, six days a week making sure I’m prepared to take a team to a Super Bowl again,” Kaepernick, who became a free agent in 2017, told Ebony magazine.

“That’s not something I will ever let go of, regardless of the actions of 32 teams and their partners to deny me employment. The same way I was persistent in high school is the same way I’m gonna be persistent here.”

The 31-year-old’s commitment to returning to the NFL marks a continuation of his message from November last year, wherein Kaepernick tweeted a video of himself training alongside former San Francisco 49ers teammate Eric Reid, with the caption: “1,363 days of being denied employment. Still putting in work with @E_Reid35 Still going hard 5 days a week. #StillReady #StopRunning.”

Kaepernick and Reid settled their collusion grievance cases against the NFL in February 2019, having alleged that teams were keeping them from playing. Reid has since returned to the league but was released by the Carolina Panthers in March 2020.

“Have confidence in your identity’

The new Netflix series, which will primarily focus on Kaepernick’s teenage years, is set to premiere on October 29.

Having been adopted and raised by white parents, Kaepernick, who has an acting role in the series, hopes to use his own teenage experience to explore issues of race and identity in society.

“There are different audiences that the show will speak to differently,” Kaepernick said in the Ebony interview.

“When you look at Black and Brown folks, especially Black and Brown youth, the message is staying true to yourself, believing in yourself, having confidence in your identity, and not letting anybody take that from you.

“I also think that as we look at broader society, part of what the show speaks to is how whiteness shows up … and how we engage with it … but also the pressures, the microaggressions, the racism, and what that shows up as.

“I hope it’s an opportunity for White people to be able to look at their actions…how they show up in society and how they are engaging with Black and Brown folks … and look at their own privilege and perspective and be able to take away from this what actions they can take to improve the dynamics and the oppressive nature of systems and positions of power and privilege that they have.”

Besides training and the Netflix biopic, Kaepernick has been involved in a variety of other off-field projects — a youth camp as well as publishing and media companies.

Alongside partner Nessa, Kaepernick founded Know Your Rights Camp (KYRC), a free campaign for youth designed to “advance the liberation and well-being of Black and Brown communities through education, self-empowerment, mass-mobilization and the creation of new systems that elevate the next generation of change leaders.”

His production and publishing companies — Ra Vision Media and Kaepernick Publishing — are designed to promote diversity across media platforms.

Ra Vision Media promotes a platform “to showcase the work of Black and Brown directors, producers, creators, and storytellers”, whilst Kaepernick Publishing, formed in 2019, allows “black and brown writers to control their narratives and retain ownershi.”

Kaepernick Publishing’s first title — “Abolition for the People: The Movement for a Future without Policing & Prisons” — is edited by the former 49ers quarterback and is set for release later this month.

“You’re gonna have to continue to deny me and do so in a public way,” added Kaepernick in his interview with Ebony magazine.

“And you’re gonna expose yourself by that, but it won’t be because I’m not ready or not prepared.

“But in that process, I’m also not gonna let you bury my future. I’m gonna continue to do work on the acting and producing side, continue to do the work with Know Your Rights, and make sure we are having an impact. I think that’s the beauty of us collectively — we are not one-dimensional.”