Djokovic back into swing in Australia despite visa concerns 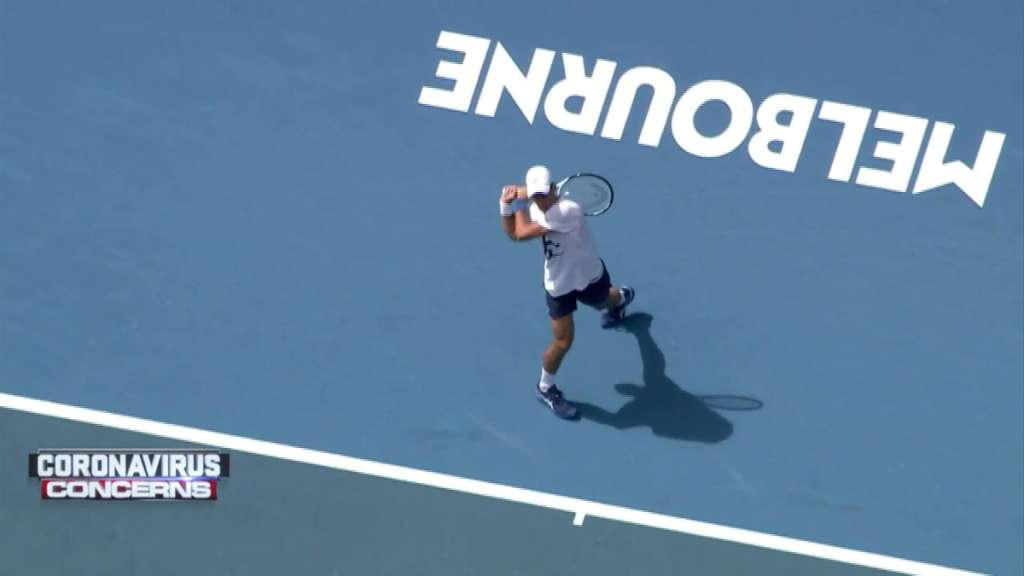 MELBOURNE, Australia (AP) — Tennis star Novak Djokovic held a practice session at Melbourne Park on Tuesday, his second day out of detention, focusing on his Australian Open title defense while still facing the prospect of deportation because he’s not vaccinated for COVID-19.

The top-ranked Djokovic hit the show courts within hours of winning a legal battle Monday against the cancellation of his visa, based on procedural grounds. He returned Tuesday afternoon for a closed practice, with doors locked and only his support team allowed into Rod Laver Arena.

Aerial images taken by Australian TV networks from a helicopter showed the nine-time Australian Open winner back at work, less than a week before the first Grand Slam tournament of the year is due to start.

Video showed Djokovic hitting shots from behind the baseline, taking feedback from his coach, and stretching beside the court with a trainer on a sunny but mild summer afternoon.

Soon after, organizers released the seedings for the Australian Open tournament, and Djokovic was listed at No. 1 for the men’s singles draw.

While he’s trying to make up time after spending four days confined to an immigration detention hotel, Djokovic is conscious he could again have his visa revoked.

Immigration Minister Alex Hawke is considering exercising his power to deport the 34-year-old Serbian under separate legislation, assessing a medical exemption that the unvaccinated Djokovic relied on to fly into Melbourne and the information supplied in the visa application.

The Australian Associated Press reported the decision was not expected Tuesday, after Hawke’s office issued a statement saying the matter was still under consideration “in line with due process.”

The deportation drama has polarized opinions and elicited strong support for the 20-time Grand Slam winner in his native Serbia.

Prime Minister Scott Morrison and his Serbian counterpart, Ana Brnabić, agreed in their telephone conversation to keep in touch over the disputed visa, Morrison’s office said.

“The PM explained our non-discriminatory border policy and its role in protecting Australia during the COVID-19 pandemic,” Morrison’s office said in a statement.

“The (Serbian) prime minister especially emphasized the importance of the conditions for training and physical preparation for the upcoming competition, considering that Novak Djokovic was not allowed to train in the previous days,” RTS reported.

Djokovic posted an image of himself and three members of his team at Melbourne Park in the very early hours of Tuesday on social media.

“I’m pleased and grateful that the Judge overturned my visa cancellation. Despite all that has happened, I want to stay and try to compete @AustralianOpen. I remain focused on that,” Djokovic tweeted. “I flew here to play at one of the most important events we have in front of the amazing fans,.”

A border official canceled Djokovic’s visa at Melbourne’s airport last Thursday, hours after he arrived in Australia from Marbella, Spain to compete in the tournament.

A judge restored his visa and ordered Djokovic be released from detention on Monday, citing procedural errors by the border officials at the airport.

Djokovic had been given a medical exemption by the Victoria state government and Tennis Australia, the tournament organizer, from its vaccination rules to compete because he was infected with COVID-19 last month.

But the Australian Border Force declined to allow him an exemption from national vaccination rules for incoming non-citizens.

It said an infection in the previous six months was only a ground for a vaccine exemption in cases in which the coronavirus caused severe illness.

There were also new questions over Djokovic’s application to enter the country after documents released by the Federal Circuit Court revealed he told authorities he had not traveled in the 14 days before his flight to Australia.

Monte Carlo-based Djokovic touched down in Melbourne just before midnight Wednesday, answering “no” to the question about previous travel on his Australian Travel Declaration form.

But the reigning Australian Open champion was filmed playing tennis in the streets of the Serbian capital, Belgrade, on Dec. 25, and training in Spain on Dec. 31 — both dates within the 14-day window.

The declaration notes that giving false or misleading information is a serious offense, and civil penalties are also available.

Djokovic told border officers that Tennis Australia completed the declaration on his behalf, but it was noted by the officer who canceled his visa that the sporting body would have facilitated that “based on information the visa holder provided.”

Since Djokovic’s visa was canceled, Czech tennis player Renata Voráčová and an unnamed European tennis official have been deported for similar reasons.

Morrison’s conservative government has blamed the debacle on Tennis Australia, which ministers accuse of misleading players about Australia’s vaccine requirements. But newspapers have reported that Tennis Australia had pleaded with the Department of Home Affairs to check the visa paperwork of Djokovic and other players before their in-bound flights.

The opposition home affairs spokesperson, Kristina Keneally, blamed the confusion on a lack of planning by the government and said the saga made Australia “look like a bit of a joke” on the world stage.

Daniel Andrews, premier of Victoria state which is hosting the Australian Open, said the federal government had changed its border rules in recent months.

“When we talked about exemptions previously, you would recall that Minister Hawke had said that it was his expectation that if you weren’t double vaxxed, you wouldn’t get into the country whether you’re playing tennis or doing anything else,” said Andrews, who like Keneally is a member of the center-left Labor Party.

“Turned out that wasn’t the Commonwealth government’s position and that they have been letting people in who haven’t been double vaxxed,” Andrews added.