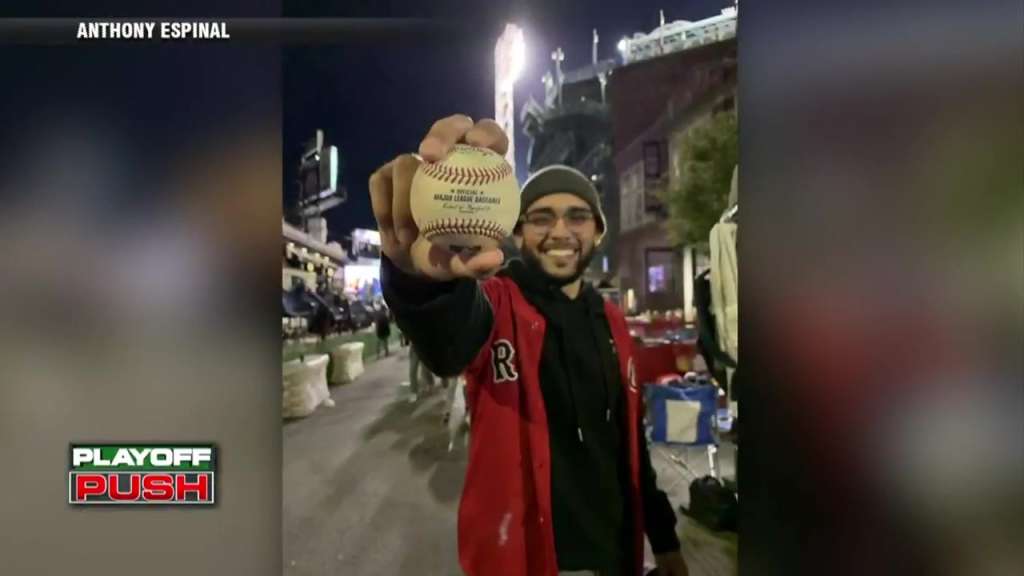 BOSTON (WHDH) - Anthony Espinal was walking to a bar on Lansdowne Street with his girlfriend Tuesday night when he saw a baseball coming over the wall of Fenway Park.

Boston Red Sox shortstop Xander Bogaerts had just hit a home run against the Houston Astros in Game 5 of the American League Championship Series, sending the baseball flying over the crowd and out of the ballpark.

“Next thing you know, all the fans were like roaring and what not and we’re like, ‘It must have been a great play,'” Espinal recalled, “and then some guy points up; I look up and I’m like, ‘Oh, cool.'”

His girlfriend added that “He didn’t even think about it. As soon as he saw the ball, he took off.”

Espinal says he pounced on the ball and feels very fortunate to have gotten it.

He added that he had a chance earlier in the season to catch a foul ball inside Fenway but missed it.

“In my mind, I’m like, I cannot miss the ball this time, it’s a big moment, it’s the playoffs, and I got it,” Espinal exclaimed.

Even though the Red Sox lost 9-2 to the Astros, Espinal is excited to be walking away with a piece of post-season history.

Bogaerts’ homer marked the 21st by a Sox player this postseason, setting a franchise record.