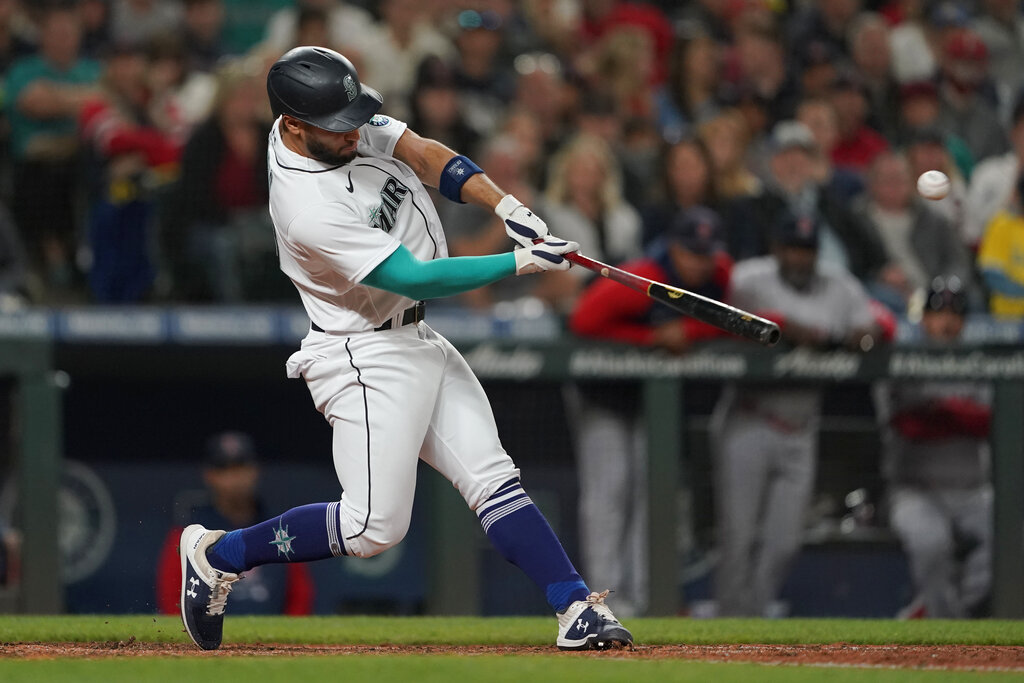 SEATTLE (AP) — Dylan Moore hit a walk-off single to center field off Boston reliever Hansel Robles in the bottom of the ninth inning to give the Seattle Mariners a 7-6 win over the Red Sox on Saturday night.

The Mariners entered the bottom of the ninth trailing 6-5 after Seattle native Bobby Dalbec broke a 5-all tie with a solo homer to left field for Boston in the top half of the inning.

Abraham Toro tied it for Seattle with an RBI single that scored J.P. Crawford, and Moore hit a ball past a diving Jackie Bradley, Jr. in center field to score pinch-runner Sam Haggerty for the victory.

The teams split the first two games of the series.

“At the end of it, we needed to come up big with some hits and we certainly got them,” Seattle manager Scott Servais said. “We’ve been struggling with runners in scoring position here lately, but huge at-bats late in that game, certainly in the ninth inning by Toro and (Moore) to pick us up.”

It was the first walk-off hit of Moore’s major league career.

“I knew I hit it hard and I hit it away from (Bradley),” Moore said. “But obviously he is a very good center fielder, so I made sure it dropped before I celebrated, most definitely.”

The Red Sox jumped out to a 2-0 lead two batters into the game, when third baseman Rafael Devers hit a deep two-run homer to right field off Seattle starter George Kirby. Xander Bogaerts scored later in the inning on a single by catcher Christian Vazquez, giving Boston a 3-0 lead.

The Mariners responded with two runs on three hits in the bottom of the first. Ty France scored from third on a wild pitch and Julio Rodriguez came across on an RBI single by Adam Frazier.

In the second, Julio Rodriguez hit a two-run homer into the left-field bullpen off Red Sox pitcher Michael Wacha, estimated at 406 feet and 108.4 mph off the bat, to give the Mariners a 4-3 lead.

Wacha wound up going 4 ⅓ innings, throwing 91 pitches and allowing eight hits, four runs, three earned, with one walk and three strikeouts. He was pulled with one out in the fifth and replaced by Jake Diekman, who got Frazier to hit into an inning ending double play.

J.D. Martinez came through for the Red Sox in the fifth with his seventh homer of the season on a hanging slider from Kirby.

“Throwing a backdoor slider to J.D. is not a great spot to throw one,” Kirby said. “I just learn from my mistakes, and I’m trying to correct them.”

Kirby exited the game after five innings, having allowed five runs, three earned,and one walk with four strikeouts on 97 pitches.

In the seventh, Toro tied the game with a double off the top of the left field wall, scoring Crawford. The ball was inches from being a home run, and evened the score at 5-all.

“We did a lot of good things today, those guys are grinding,” Boston manager Alex Cora said. “You know we put some guys to the limit. You try to do everything possible with what you have that day and then we turn the page and be ready for tomorrow.”

Red Sox: OF Alex Verdugo (knee) was back in the lineup Saturday after sitting out Friday with a sore knee.

Mariners: C Tom Murphy (shoulder) is expected to begin light baseball activity by the end of Seattle’s current homestand, but is still a few weeks away from a return. … RHP Ken Giles was scheduled to make a rehab outing Saturday in Triple-A Tacoma, and is expected to make a few more minor league outings before joining the MLB roster.

The Mariners reacquired INF Kevin Padlo on waivers from San Francisco Saturday and added him to the 40-man roster in place of RHP Drew Steckenrider, who was designated for assignment. Padlo played 41 games for Triple-A Tacoma between 2021-22, and played most of this season in Triple-A Sacramento after being traded to the Giants for cash considerations on April 26. He will report to Triple-A Tacoma.

Steckenrider led the team with 14 saves last year, but had an 0-2 record with two saves and a 5.65 ERA in 16 appearances in 2022. The Mariners have seven days to trade, release, or place Steckenrider on irrevocable waivers.

Red Sox: Boston has not announced a starter for Sunday’s series finale. RHP Garrett Whitlock had been scheduled to make the start, but was put on the IL ON Friday with hip inflammation.

Mariners: LHP Robbie Ray (5-6, 4.97 ERA) will look for his second straight win on Sunday when he makes his second start of the season against Boston. Ray went five innings and allowed eight hits, three earned runs, and three walks in his start on June 6 against Houston, with three strikeouts.