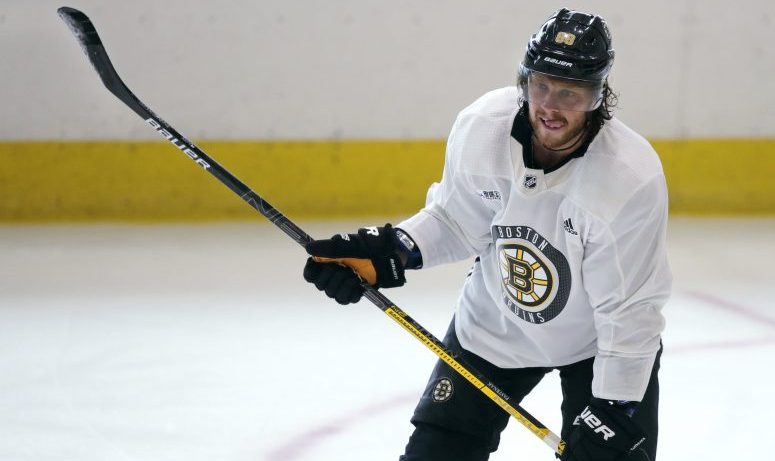 BOSTON (AP) — Bruins coach Bruce Cassidy, like just about everyone rooting for Boston, watched Patrice Bergeron coasting toward the net and pictured the potential go-ahead goal.

“You’re thinking, ‘Shoot it! Shoot it!’” Cassidy said on Sunday, a day after the Islanders beat Boston 4-1 in Game 4 to tie their second-round playoff series at two games. “He held it, held it, and he had a wide open net. We just didn’t make the play.”

Bergeron set up one of the best scoring chances of the game — if not one of the best chances possible — drawing three defenders to him in the right circle before sliding the puck over to David Pastrnak in the left one with a wide open net to shoot at.

The Bruins winger banged it off the far post.

“That’s one where you know: ‘Boy, it might be a tough night for us tonight, in terms of getting things to go our way,’” Cassidy said after the game. “When your best player hits the post on an open net, and it just kind of sits there. It’s going to be one of those nights where you’re probably not getting breaks, so you’re gonna have to go earn them yourself.”

Pastrnak, who led the league in goal scoring last year and is tied with Brad Marchand for the team lead with five this postseason, collapsed forward, unable to believe what he had done.

The game remained scoreless through the first period. The teams traded goals in the second before New York broke out with three in the third — Mathew Barzal’s tiebreaker plus a pair of empty-netters.

“At the end of the day, I don’t know if (the miss) makes a difference in the game or not,” Cassidy said. “It’s hindsight. I would have liked to see it go in. It didn’t happen.”

Game 5 is Monday night in Boston, with Game 6 back at Nassau Coliseum on Wednesday night. Game 7 would be back in Boston on Friday, if necessary.

“We’ll be determined to make sure we come at them and keep their crowd a little bit quiet,” Islanders coach Barry Trotz said.

Bergeron was a finalist for the Selke Trophy for the 10th consecutive year. He has been named the NHL’s top defensive forward four times, a record he shares with Hall of Famer Bob Gainey.

“It’s good people are paying attention, because he deserves it,” Cassidy said. “I’m glad to see him get his just due, and good luck to him.”

Florida Panthers center Aleksander Barkov and Vegas Golden Knights right wing Mark Stone were the other finalists. Barkov is a first-time Selke finalist and Stone is in the final three for the second time.

Cassidy knows who he would vote for.

“I obviously have bias, but I feel he should be the winner,” the Bruins coach said. “I’m sure the coaches of the other players feel the same way.”

Bergeron led the NHL with 714 faceoff wins and a career-best 62.3% win rate. But he has struggled this series against the Islanders, winning just 16 of 42 faceoffs in Games 3 and 4 in New York.

Trotz commended the 35-year-old Canadian before dropping a little hint for the officials as the series continues.

“Bergy’s been a really good faceoff guy. One of the best,” Trotz said, adding that his players use video for tips on how to oppose him. “He’s a veteran guy who knows how to cheat on the faceoffs. I’m relying on our very capable linesman crew to make sure the cheating doesn’t go on.”

The NHL fined Bruins forward David Krejci the maximum $5,000 for slashing Mathew Barzal during the second period of Game 4. Krejci received a penalty and the Bruins successfully killed it off.