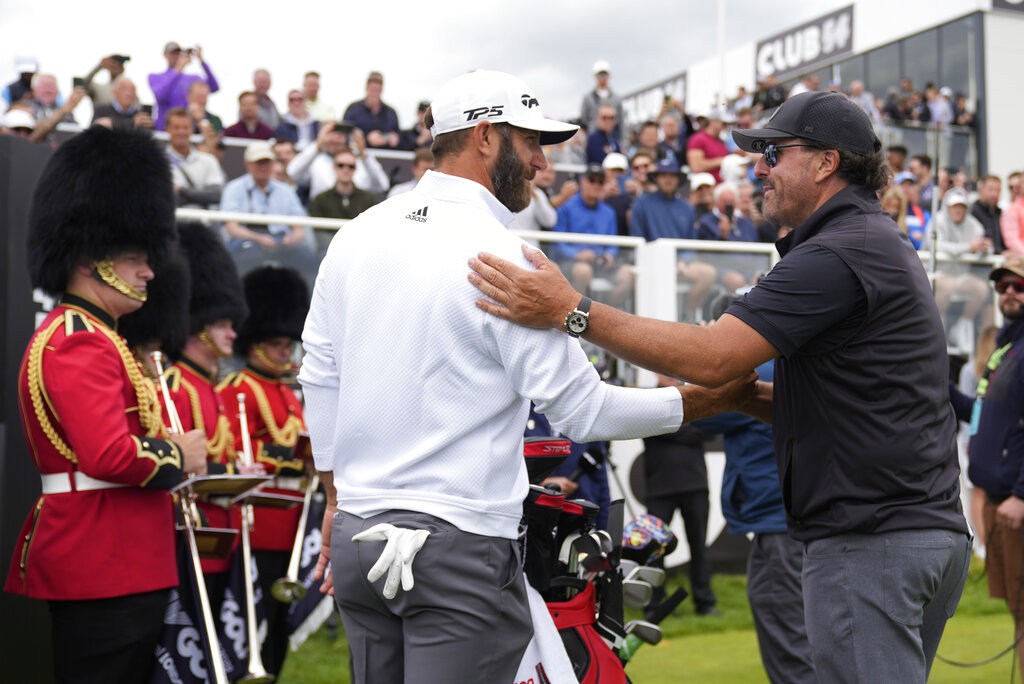 Dustin Johnson, Phil Mickelson and other PGA Tour members who teed off in the Saudi-funded golf league Thursday are no longer eligible for PGA Tour events under penalties Commissioner Jay Monahan shared soon after the first tee shot was struck.

Still to be determined is whether those players are ever welcome back.

The ban includes participation in the Presidents Cup, which for the International team is determined by the world ranking.

The USGA already has said eligible players can still compete in the U.S. Open next week. The PGA Tour does not run the majors.

In a memo sent to tour members, Monahan said that even if players resigned from the tour ahead of the first LIV Golf Invitational outside London, they will not be allowed to play PGA Tour events as a nonmember by getting a sponsor exemption.

Ten players have resigned from the PGA Tour, a list that includes Johnson and Sergio Garcia. Mickelson, who earned lifetime membership with his 45 PGA Tour titles, has not.

“These players have made their choice for their own financial-based reasons,” Monahan wrote. “But they can’t demand the same PGA Tour membership benefits, considerations, opportunities and platform as you. The expectation disrespects you, our fans and our partners.”

LIV Golf, run by Greg Norman and funded by Saudi Arabia’s sovereign wealth fund, responded to the tour’s decision by calling it vindictive and divisive.

“It’s troubling that the tour, an organization dedicated to creating opportunities for golfers to play the game, is the entity blocking golfers from playing,” LIV Golf said. “This certainly is not the last word on this topic. The era of free agency is beginning as we are proud to have a full field of players joining us in London, and beyond.”

At issue is players competing without a conflicting event release from the PGA Tour.

Players typically receive three such releases a year for tournaments overseas, but Monahan denied releases for the LIV Golf Invitational because it is an eight-tournament series that has five events in the United States.

The tour does not allow releases for events in North America.

“We have followed the tournament regulations from start to finish in responding to those players who have decided to turn their backs on the PGA Tour by willfully violating a regulation,” he wrote.

Monahan said the players who resigned will have their names removed from the PGA Tour standings — FedEx Cup and Presidents Cup — after this week. He said the tour will make sure those who haven’t resigned will not affect rankings on various lists of tour players.

Questions remain, however, such as whether players can ever return.

The first test figures to be the Travelers Championship in Connecticut, the week after the U.S. Open. Johnson was among those listed in the field.

The LIV Golf Invitational was being streamed on YouTube and Facebook. Before the opening round, Norman said he was thrilled to see an effort 30 years in the making come to fruition.

He tried to start a World Golf Tour in the 1990s for only the elite players and had a TV contract lined up until the PGA Tour quashed the moment with support from Arnold Palmer. Norman didn’t realize until too late that he didn’t have as much support from the players as he thought. That circuit never got off the ground.

This one did, with the backing of riches the likes of which golf has never seen. The Daily Telegraph reported that Johnson received $150 million — more than Tiger Woods’ career PGA Tour earnings — just for signing up. Mickelson did not deny reports that he got $200 million.

Each tournament offers $25 million in prize money, with $4 million for the individual winner. The PGA Tour’s richest event is The Players Championship at $20 million. The Canadian Open this week, which has five of the top-10 players in the world, has an $8.7 million purse.