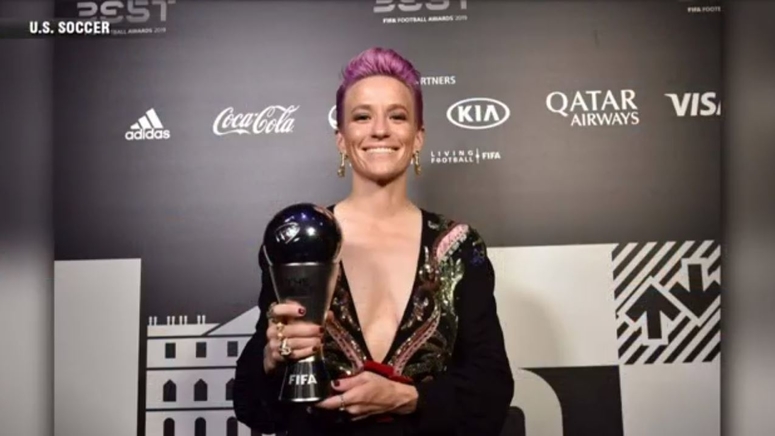 PORTLAND, Ore. (AP) — Long before she struck that iconic victory pose to become the face of women’s soccer, Megan Rapinoe endured her share of setbacks to play the game she loves: Notably, a series of knee surgeries stretching back to her college days.

She tore her left ACL as a sophomore at the University of Portland, then tore it again in her second game back the next season. Following the 2015 World Cup she tore the ACL in her right knee and then in 2017 she had surgery to repair a meniscus tear in her left.

Rapinoe said she’s found help in managing the pain and recovery from her injuries: CBD. Her twin sister Rachael, also convinced of the healing powers, helped launch a CBD products company, Mendi, which is aimed at athletes.

“When it’s taken after a hard training and before bed, I feel it gives me a better night’s sleep and I feel like I’m able to relax a little bit easier,” Megan Rapinoe said. “So, I kind of just have it in my daily routine, like I would eat healthy and take natural products and drink a lot of water and take CBD and get as much sleep. It’s kind of the secret sauce.”

Mendi is just one company capitalizing on the ongoing interest in CBD. CBD, or cannabidiol, is found in cannabis. But CBD products like Mendi’s are derived from hemp and contain no THC, the chemical in marijuana that produces a high. Hemp fiber and seeds are also used to produce textiles, rope, paper, cosmetics and fuel.

The 2018 federal Farm Bill listed industrial hemp as an agricultural commodity and removed it from the Controlled Substances Act — paving the way for an influx of CBD-infused products currently on the market and, in some cases, available at the local grocery store.

While there are claims CBD can help treat a variety of conditions, from insomnia to anxiety to pain, there’s little research yet to back those claims.

Nevertheless, it has become a burgeoning industry. The CBD market is expected to harness $20 billion in sales by 2024, according to a study by BDS Analytics, a firm that tracks cannabis industry trends.

Many athletes like Rapinoe swear by it, pointing out that it is a natural alternative to opioid treatments.

Social CBD became a sponsor the of the National Women’s Soccer League’s Portland Thorns last fall, while the company AthletiCBD sponsors the Washington Spirit. NWSL policy allows athletes to use cannabinoids, although the league does not formally endorse use. Mendi has partnered with the Utah Royals and N.C. Courage.

USA Triathalon has a sponsorship deal with with CBD company Pure Spectrum, becoming the first governing body to do so.

Floyd Landis, who had his 2006 Tour de France title stripped for doping, owns Floyd’s of Leadville, which sells CBD products. Landis also has an interest in marijuana dispensaries in Colorado and Oregon. And yes, he sees the irony: “The jokes just write themselves,” he said.

“It’s changing, but people thought that the whole medical marijuana thing was just kind of an end-run around the law and people just wanted to get high. But there’s a real medicinal value in cannabis, and CBD’s responsible for a lot of that, it just wasn’t well understood,” Landis said. “And even to this day, there’s still a lot of hype around it that’s confusing and difficult to figure out.”

CBD certainly isn’t a cure-all. Former NFL player Kyle Turley, who struggled with addiction to pain killers, was warned by the Food and Drug Administration after claiming it could help treat COVID-19.

Like her famous sister, Rachael Rapinoe played for the Portland Pilots and won a national title with the team in 2005. She also struggled with injuries, with four separate knee surgeries that ultimately ended her soccer career. She went on to get a master’s degree in health and exercise and has served as a strength and conditioning consultant for college teams.

She said when she was introduced to CBD products several years ago by fellow athletes, the first time she had seen cannabis used outside of “stoner culture.”

“When I first started using it, and when I started seeing other athletes use it, the first thing I noticed is that they were bouncing around from brand to brand and there was no real trusted sports brand in this space. So that’s when I saw an opportunity to build something that athletes could really trust and that really spoke to athletes,” she said.

Mendi was launched last year during the Women’s World Cup and it has already surpassed expectations.

There is no uniform policy among the major sports leagues when it comes to CDB. Although, as it becomes more widely available and cannabis is legalized in many states, restrictions appear to be loosening.

The NFL’s Pain Management Committee held a forum on the use of CBD to treat pain earlier this year. The league’s new collective bargaining agreement says players won’t be suspended for a positive marijuana test, and levels of allowable THC were increased.

The NHL has no specific CBD policy, but the league does test for cannabis. Players who test positive are not fined or suspended, but rather referred to a behavioral health program.

Major League Baseball removed marijuana from its list of drugs of abuse in December.

The NBA and WNBA have the strictest rule, with marijuana and its “byproducts″ banned. Players must enter a league program after the first offense, while subsequent offenses result in fines and possible suspension.

No CBD products are as yet NSF certified, a measure athletes generally use when looking at whether supplements contain banned substances.